Death is the same across all cultures—we all live and die. The cycle of life is the same, but how we view death is different. You’re familiar with the traditional American funeral. Family members, friends, and relatives gather quietly around the body at a wake wearing all black. Later there is a church, synagogue, or temple ceremony with a priest or rabbit praying.

But what about other ways of grieving? From chopping the deceased into pieces on a mountaintop to dancing with corpses, this guide gives you a brief overview of death cultures around the world. 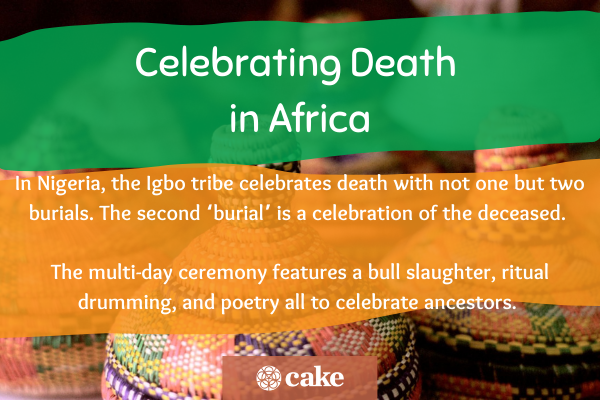 Africa is a melting pot of 54 countries, a billion people, and over 3,000 tribes (speaking 2,000 languages!). It’s not possible to write a comprehensive guide of every death custom. Still, some shared beliefs span the continent.

In Africa, the deceased continue living after death. Most Africans believe in ancestors—the dead who continue living and guiding their family in the afterlife. Without a proper funeral and burial, the ancestor will become a wandering ghost.

African funerals are colorful, lively, and elaborate affairs. Below are the most interesting (and unique) death traditions in Africa.

Worshipping ancestors is essential in Africa. If you’re interested in learning more, make sure to take a look at these guides on Nigerian and Ghanian funerals for a comprehensive look at each countries funeral customs.

Asia makes up 30 percent of the Earth and 60 percent of the population. Asian views on death root back to Hindu, Islamic, Confucianist, and Buddhist religions. Let’s take a look at the unusual customs you’ll find in Asia’s central regions. 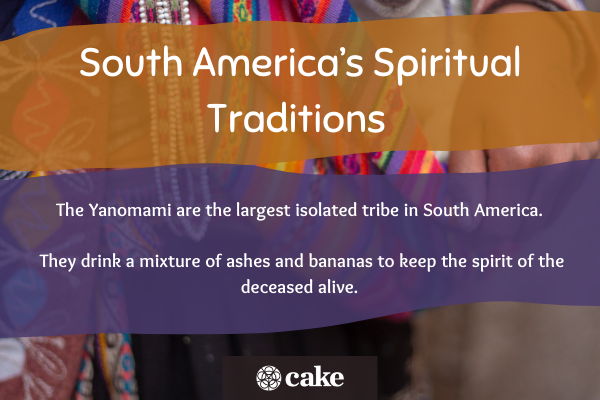 According to Pew Research, 40 percent of the world’s Catholic population is in Central and South America. Old religions mix with spiritual traditions for a unique outlook on death in Latin communities.

The colorful cultures of countries like Costa Rica, Panama, and Guatemala show the importance of family in life and death. Immediate and extended family members provide comfort and aid in grief. Latinos don’t shy away from discussions of death.

First, the family holds a vela or celebration for the deceased in countries like Nicaragua and Costa Rica. Guests drink alcohol and eat pastries as they stay up all night, sharing memories of their loved ones.

Also, most Central Americans are deeply Catholic. The family organizes a wake, mass, and celebration for the deceased. Superstitions like kissing dirt before throwing it on the coffin or burying a loved one with the keepsakes are commonplace.

Most South Americans are Catholics, but remote areas in the Andes mountains and Peruvian Amazon have their own spiritual beliefs that influence death culture. Here are some fascinating rituals and beliefs in South America:

Across Latin America, people celebrate their ancestors on the Day of the Dead. In some cultures like Peru, families believe the deceased can rise from the dead and join them in celebration.

The Latino culture is a unique example of how the relationship between loved ones continues to exist after death.

Europe as a Religious Center

There’s no shortage of historical wonders in Europe. With over 44 countries, the second smallest continent is a cultural center. European countries are a top bucket-list destination, but did you know it’s a religious hub, too? Below is a slice of shared religious beliefs in Europe.

Eastern Europeans are more likely to be highly religious and follow Orthodox or Christian traditions, according to the Pew Research Center. Many Eastern Europeans mix folk religions in their death customs, too.

For example, before a Russian funeral, family members stop clocks and cover mirrors to avoid more death in the family.

Though Eastern folks tend to be more religious, Western Europeans trend towards secularism. Secular funerals are human-centered and celebrate the life of the deceased, not their death. Western Europeans may have Christian beliefs but not attend church. Many believe in a higher power that influences funeral traditions like a traditional mass and grave burial.

Some of Western Europe (like Italy) is still highly religious. Italy is home to Vatican City, which headquarters the Roman Catholic Church. Italian funerals are a prime example of the closeness of family in the death of Europeans and their dedication to traditional burials.

Death in the Middle East 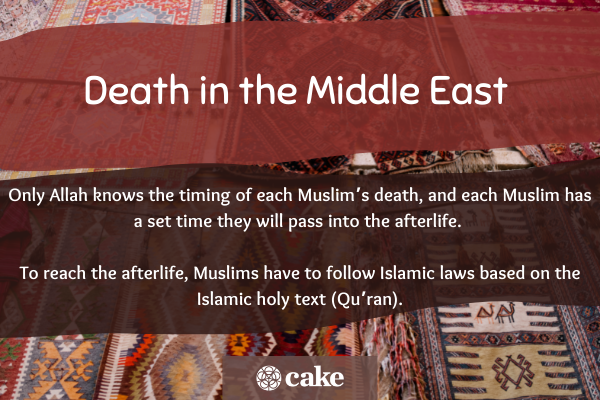 The majority of people living in the Middle East believe in the religion of Islam. Muslim funerals are simple and focus on the deceased’s actions in the earthly realm.

Families show emotion openly, often screaming, crying, or slapping their faces. Islamic funerals are the opposite of the Latin celebrations or African worship you read about above.

Muslims are uniquely united in death. Family, friends, and neighbors gather together to bring food to the deceased's family and share in prayer.

Only God knows the timing of each Muslim’s death, and each Muslim has a set time they will pass into the afterlife. To reach the afterlife, Muslims have to follow Islamic laws based on the Islamic holy text (Qu’ran).

Finally, death isn’t an easy process either; it’s bitter and painful for Muslims (especially the soul separating from the body). People all over the Middle East unite over religious customs. It’s an integral part of Middle Eastern culture.

Denial and Celebration in North America

Next, let’s take a look at death views in two different countries in North America. The similarities and differences in these perspectives give you a first-hand look at the differences in death customs in the U.S. and Mexico.

Many people have had a brush with death through the passing of their aunt, uncle, grandmother or grandfather or even a close friend. However common the death of a loved one may be, conversations about death don’t usually occur between families. Instead, Americans view them as taboo or morbid.

Christianity is the dominant religion in America. Christians don’t view death itself as a reason to celebrate. In most Christian practices and rites, it’s the afterlife that is celebrated. American Atheists, on the other hand, are more likely to treat death naturally.

Like in Europe, the trend of secularism is rising in the states. Since 2009, the percentage of atheists rose from 2 percent to 17 percent. Only time will tell how this will influence beliefs about death.

America wasn’t always disconnected from death. Before medicine was able to prevent and treat diseases, people died at home surrounded by family, and death conversations happened more often. Whether religious or not, end-of-life planning is a growing and essential trend in America.

Mexico might be America’s neighbor, but death perspectives couldn’t be more different. Mexican traditions focus on death as a new beginning. Conversations between family members are open, and often stories are shared about the deceased.

Death is ingrained deeply in the Mexican culture. The Day of the Dead is a time to remember, honor, and celebrate those that have passed. All over the country, Mexicans take to the streets in joyful song and dance and leave offerings at cemeteries for the deceased. Some even sleep next to their graves at night.

Death and Dying in Oceania

The small island nations of Oceania have big ideas about death. The islands are rich in culture, and many island people honor their ancestors through rituals and art. For example, the indigenous people of Melanesia wear masks to connect with the spirit world.

You may find similarities in Oceanic beliefs to both Asian and American funerals. Many island people believe in spirits. Like in Asian cultures, if traditions aren't followed, they believe that angry ghosts can haunt their family.

In Oceania, Christian traditions are followed, too. Island residents may hold a mass or call a priest to give the deceased blessings. Overall, there’s no one death perspective in Oceania. It’s a melting pot of indigenous and traditional customs.

What Are Your Final Wishes?

Now that we’ve traveled around the world exploring death perspectives, you can begin thinking of your own funeral wishes. Is your death view religious or secular? Think about how you would like to be remembered—a gravestone isn’t the only option (you can plant a tree instead!)

From burial to legal planning—it can be overwhelming to think of your death. Cake can help. Your end-of-life planning profile stores your wishes so you can share them with friends and family and fully live in the present.