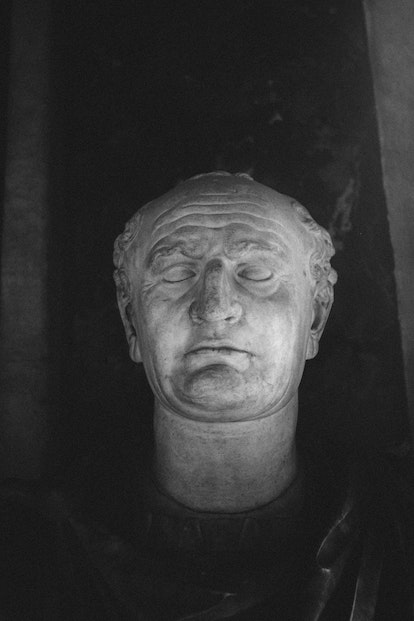 Though a death mask might sound like something people wear in haunted houses and on Halloween, it actually has an ancient history dating back through civilizations around the world.

A death mask, though it sounds sinister, is just a wax or plaster cast of a dead individual’s face. They have been used since the days of ancient Egypt, and they serve an important purpose in death rituals.

Preserving the memory of the dead is an important part of death in different cultures. From ancient times to the past 100 years, death masks helped tell the story of those who died.

Though they might sound scary, death masks serve an important purpose within art, culture, and history. In this guide, we’ll reveal the origin, process, and relevance behind death masks.

What is a Death Mask?

A death mask is a plaster or wax cast of a mold which is taken from the face of a deceased person. These are true portraits, and they were rarely altered. Sometimes they would be changed in small ways to make it appear like the subject was still alive, but this wasn’t always necessary.

What’s the purpose of a death mask? Starting in ancient Egypt, these death masks were a way to aid sculptors and artists when making portraits of the deceased. The dead were to be honored, and it was common for many statues and busts to be made to respect the dead.

These weren’t just used in ancient Egypt. The concept quickly spread to other parts of the world, most notably across Europe. While they weren’t common for average folk, they were a way to memorialize the elite, such as kings, rulers, and famous artists.

In ancient Egypt, death masks also guarded the deceased person’s spirit in the afterlife. It was believed that this spirit could face evil spirits and corruption, and the death mask is a form of protection.

That being said, a death mask also had a more practical purpose. It aided artists and sculptors in creating realistic depictions of the deceased after they’ve been mummified. Since the human face changes in death and decomposes over time, the death mask was a way to keep this shape realistic.

While the death mask began as a way to keep evil spirits from the dead, the practical use was what spread across the globe. From the Middle Ages until the 20th century, death masks were models for sculptors and artists alike.

In some cultures, like ancient Egypt, death masks were placed over the dead as a form of funerary art or burial rite. You’ve likely seen some of these masks from Egypt in particular, which are now featured in well-known museums.

Overall, these masks were to assist with making statues and busts of the deceased. Later in their history, they became valuable in themselves as a memento of the deceased. This was particularly true for the more famous masks. Today, you’ll find these masks in museums, royal homes, and art collections.

How Are Death Masks Made?

Death masks are a unique art form. Though it might sound simple, there is a lot the caster would need to keep in mind in order to create a true likeness of the deceased. A physician was usually the one to make the plaster mold, despite this not being a medical practice.

First, the mask would need to be made as soon after the death as possible. After death, the body naturally bloats and distorts the face. Getting the cask made is something that needed to happen within hours of death.

To start, grease was applied to the face and any facial hair to prevent the hair from sticking to the plaster or wax. Next, plaster or wax bandages were layers on the face to capture the details. Several layers would be applied to strengthen the cast. While the drying process is quick today, it would have taken over an hour in centuries past.

Finally, the mold is removed from the face. Wax or metal like bronze would be poured into the mold to create a three-dimensional death mask. These molds could last hundreds or even thousands of years.

A lot of the most famous deaths in history are marked by death masks. You might be surprised to learn that these masks can still be seen today, and they’re often a part of private collections. To own a mask of a famous political figure or artist could be worth a pretty penny.

While many death masks have been lost through time, we know of the following still existing today:

Though this might seem like a practice that’s been left in time, death masks are facing a recent resurgence in popularity. As more people reconsider our modern practices around grief and loss, old ideas are given new light. Artists are reclaiming this practice, not just for well-known celebrities, but also for everyday people.

A death mask is a way to capture a moment that’s often hidden away from plain sight. A traditional death mask isn’t something that’s altered. It’s preserved, wrinkles and blemishes included. This real-life glimpse into the moment of death is something few people experience,, and artists are hoping to transform the way we think about death and dying.

Modern death masks do away with older traditions. They’re made of unique materials, and they offer a new way of thinking about what happens to our bodies and our legacies when we die. You can see many of these new innovations in some of the best art exhibits in the world.

A Glimpse at the Mask of Death

Death masks traveled a long way through history to get to where they are today. Taken in the first minutes or hours after death, this has long been an intimate tradition that blurs the lines between this world and the afterlife. While death masks were originally only for the elite or even godlike in ancient cultures, it’s now something artists are reclaiming for all.

Though this type of confrontation with death might be intimidating, it’s important to recognize the value of legacy. Our bodies don’t last long after we die. Even with embalming, our bodies take up a temporary space. A death mask preserves this part of ourselves, our expressions, and our features. It’s a solid memory and something time can’t destroy.

We have death masks to thank for our understanding of people who belonged to another time. In meeting their masks, we face them ourselves from a brighter future.