Everyone copes in different ways, and learning to laugh at some of the more serious sides of life is part of being human. In the world of the death positive movement, many people find peace in the humor of death. Who said death had to be a sad affair? It’s a natural part of life, and it’s something everyone will experience. Why not laugh at it on occasion?

Finding the right words for what to say when someone dies is never simple. Using humor is a great way to cope, or even to honor their memory. Puns are there to poke fun at everyday things, and these 30+ death puns are sure to get you laughing. Whether you use them for your funeral planning or just to feel more comfortable about the idea of death, let them guide you. 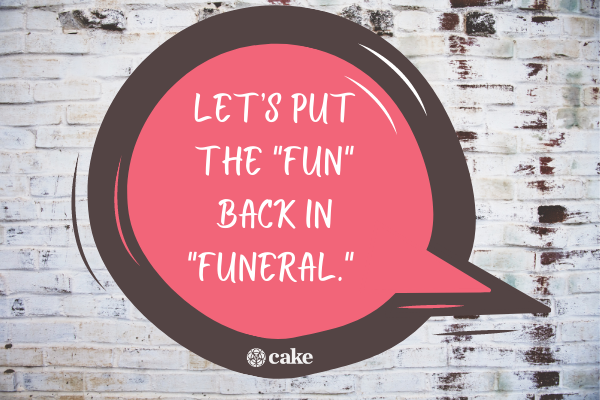 1. This funeral is a grave affair.

Here, the pun is the meaning of the word “grave” which usually means serious. In this context, it’s referring to the burial of a body in a grave.

2. Let’s put the fun back in funeral.

While this might be a bit cheesy (what pun isn’t, really?), it’s true that you can’t spell “funeral” without “fun.”

3. She always was known for her killer puns.

If you’re joking about the deceased person’s sense of humor, hint that her “killer puns” were the death of her.

4. He was dying to get into the funeral business.

Regardless of the deceased’s career-of-choice, this pun about “dying” to get into the funeral industry hints that they’re laughing along from behind the grave.

5. After seeing an ad for burial plots, I thought this was the last thing I needed.

Who doesn’t love joking about death planning? A funeral plot is one of the last things you’ll need, but it’s also something everyone needs.

6. Thanks to our funeral director for being the last person to let us down.

The joke here is that funeral directors are the ones to coordinate the burial. Thus, they’re both reliable and are the last to “let us down” into the ground.

7. What do you call a funeral ship? A sea hearse.

The play on words between “horse” and “hearse” pokes fun in this classic pun.

8. The crematorium has to urn our business.

“Urn” sounds like “earn” in this context, making light of the fact that crematoriums are the reason behind urns.

9. The will is the dead giveaway.

A will is where the deceased lists how they want their belongings and assets distributed to friends and family. In other words, it’s a chance for the dead to “giveaway” their things.

10. Speaking badly of the dead is a grave mistake.

Speaking ill of the deceased is notoriously in bad taste or a “grave” mistake. The double meaning of “grave” as both serious and where dead bodies rest below grown makes this pun worthy of a chuckle.

11. Why do ghosts ride the elevator? To lift their spirits.

Here, the pun is on the word lift, which means both elevator and an increase in happy feelings. Since a ghost is a spirit, this pun works on a number of levels.

12. Did you hear the news about the graveyard? There are people dying to get in there.

This joke makes it seem like people are excited to visit the graveyard. In reality, the only way to get in is to die.

13. The job of a mortician is to make you feel dead gorgeous.

A common way to say someone looks good is to say they look “drop-dead gorgeous.” In this pun, it’s teased that because a mortician often improves the look of dead bodies for a viewing, they help you look your best.

14. Autopsies are a dying practice.

While autopsies are still very common, it’s true they are a practice only for the dead.

15. Cremation is my last hope for a smoking body.

Since bodies are literally burnt during cremation, that’s one way to get a “hot body.” 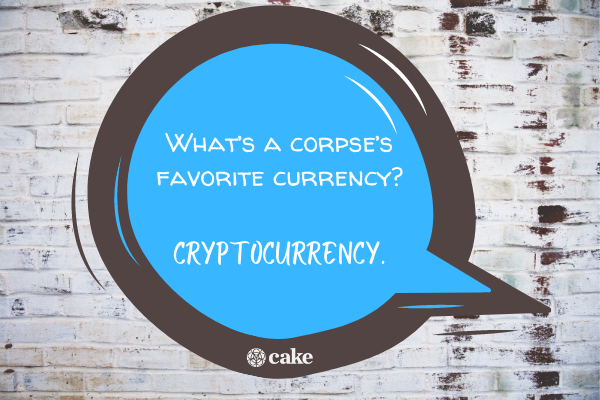 16. Let’s party like a mortician and grab a cold one.

A “cold one” is another word for a cold beer. In the context of talking about morticians, it also sounds like grabbing a body that’s cold after death. In reality, most morticians would rather have the beer!

17. Get well soon because headstones are expensive!

Not only is this a true sentiment about the cost of headstones, but it’s an inspiring way to encourage any friend or family member to feel better quickly.

While corpses don’t actually need money, if they did, they’d pay in cryptocurrency. The pun here relies on the word “crypt” which is a place where people are buried. It’s conveniently also the beginning of the word for Bitcoin and other types of digital currency.

19. What did the ghoul say when he walked into the funeral home? Is your corpse tender here?

An old classic, this joke plays on the “a [insert noun here] walks into a bar…” set up. In this case, it’s a dead ghoul who is looking for the “corpse tender” instead of the bartender.

20. What’s the difference between a corpse and a shirt? One’s a casualty and the other is a casual tee.

Though a bit silly, this pun plays on the difference between the words “casualty” and “casual tee” which sound eerily similar when you think about it.

It’s true that you aren’t actually likely to hear a joke from a corpse. The pun on the phrase “dead serious” implies that they simply don’t have any sense of humor. In reality, they don’t have much of anything at all.

22. My skeleton puns are very humerus.

This pun is effective in its simplicity. “Humerus” takes a double meaning, implying both funny and the type of bone found in a skeleton.

A dead end is a street with no outlet, and this joke plays on the term itself implying that ghosts are already dead, so this must be their favorite street.

24. Even though your partner died, they’ll always be your boo.

This might be one of the most unique sympathy messages, but you have to admit it's worth a laugh. “Boo” is another word for significant other, and it’s also the scary sound ghosts make in the movies. This cute pun is guaranteed to be a crowd-pleaser!

When you exhume a corpse, you dig up the body. This is very inappropriate behavior, and you could call it undignified to play a pun on the word “dig.”

26. If you rush a decapitation, you’ll get a head of yourself.

Though grotesque, this pun pokes fun at the idea of decapitation. If you’re not careful, you might cut off your own head—yikes! Luckily, there aren’t very many decapitations today to need to worry about this, making it the perfect joke.

Kr. Kevorkian is famously known as Dr. Death since his work is primarily in doctor-assisted suicide for terminally ill patients. This joke hints at his “deadly” past, asking a seemingly innocent question about his own health and whether he’s dieabetic (diabetic).

Most people have a “bucket list” of things they want to accomplish before they kick the bucket. In addition, funeral flowers are a way to pay respects to the deceased. Implying that having flowers at your funeral is on your “bouquet” (bucket) list is a punny joke.

During an auction, people bid on things. In this joke, a pun is played on the word morbid to imply a corpse leads to “more bids.”

30. Corpses are lived about being dead.

Last but not least, this joke is a silly way to poke fun at the process of dying. “Lived” sounds like livid, making this pun have the double meaning of to live and angry. Ultimately, this implies that corpses are not happy to be dead. 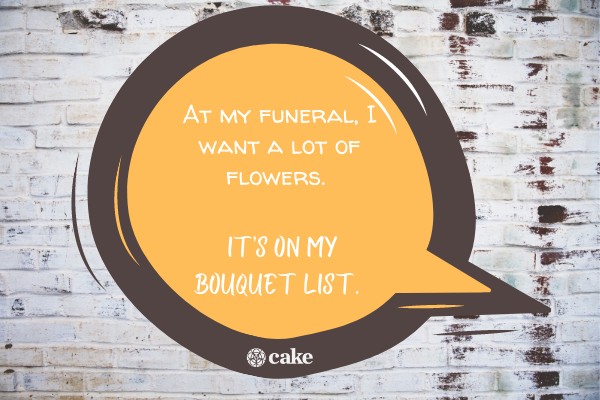 Post-loss tip: If you are the executor for a deceased loved one, humor can help you cope, but handling their unfinished business can be overwhelming without a way to organize your process. We have a post-loss checklist that will help you ensure that your loved one's family, estate, and other affairs are taken care of.

Learning to Laugh About Death

While some of these puns might feel uncomfortable at first, it’s perfectly okay to laugh about death from time to time. This is the great unifier. The only thing every person on this earth is bound to experience. It’s not always pretty or graceful, and it’s fine to laugh about things that are scary.

All of this talk about death and dying might get you thinking about your own end-of-life decisions. Start end-of-life planning to get the ball rolling on your own plans. Whether you want your loved ones to remember your humor and wit or if you’d rather your funeral be a somber affair, this is entirely up to you. It’s all about being in control of your life and death.

How to talk about death Death and dying