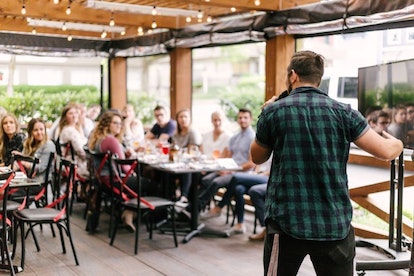 Death is an unavoidable part of life—and that frightens some people. Understandably, plenty of us dislike talking, or even thinking about, death.

But, for every dozen or so people who shy away from thinking about mortality, there are others who find death fascinating. This interest with death has given rise to a new type of event: death salons. These spots cater to the tastes and interests of people who can not only tolerate exploring the topic of death, but also genuinely enjoy it.

So, what exactly is a death salon? What types of experiences do they offer? Where can you find a death salon nearby? Keep reading to find out.

That said, a death salon is essentially a temporary museum or exhibition for self-proclaimed “death geeks.” They let attendees explore this otherwise taboo subject directly

At one death salon, a Pennsylvania medical examiner hosts presentations in which he displays pictures of graphic deaths, and uses these pictures to give anatomy and autopsy lessons.

Some death salons allow artists to display or sell items, such as urns. Death salons may also feature old pictures and other artifacts from history that illustrate or touch on the idea of death. At some, funeral directors answer guest questions about their work.

Additionally, death salons can center around a specific experience or theme. For example, some people choose to host death salon film festivals.

As it stands, death salons don’t operate out of their own permanent brick-and-mortar establishments. Organizers typically host them in such spaces as music venues, cemeteries, and any other space that can accommodate them.

If you just learned about death salons, you might immediately wonder why anyone would feel drawn to them. After all, not everyone is into the idea of spending a day talking and learning about death.

That said, death salons offer truly educational experiences. Death ties into many other subjects. Talking about death can help us learn about history, science, culture, and much more. You could almost consider death salons to be semi-academic conferences.

Maybe more importantly, death salons can (and do) serve a truly valuable purpose for certain people. The idea of a death salon is actually the result of a larger “death positivity” movement.

We all have to die. Much as we might like to believe otherwise, death is unavoidable. How we react to this fact often has a major impact on how we live our lives. It can also affect our overall enjoyment and comfort on a day-to-day basis.

Many people try to hide from their fear of death. This doesn’t always work. Although some people who fear death can manage to set that fear aside, others struggle to genuinely manage their anxiety. They don’t know how to accept death. They also may not be truly content in life until they learn to.

Death salons started with the Order of the Good Death. In 2010, mortuary student Caitlin Doughty was driving a van filled with 11 corpses. She suddenly found herself longing to live in a society where people feel more comfortable with death and dying.

This moment inspired her to found the Order of the Good Death in 2011. The Order describes its mission with these words:

“The Order is about making death a part of your life. That means committing to staring down your death fears- whether it be your own death, the death of those you love, the pain of dying, the afterlife (or lack thereof), grief, corpses, bodily decomposition, or all of the above. Accepting that death itself is natural, but the death anxiety and terror of modern culture are not.”

This idea resonated with others. As the Order attracted more participants, Doughty and other high-ranking members decided to organize the first death salon. This Los Angeles event took place over the course of three days in October 2013.

The response, along with the Order’s growing popularity, led to death salons becoming recurring events. Organizers now host death salons throughout the U.S. and beyond.

You might also like to know that Caitlin Doughty has written a book. Smoke Gets in Your Eyes offers a behind-the-scenes look at what working in a crematorium is like. Add it to your reading list if this topic interests you.

What Happens at a Death Salon?

Again, the specific nature of each death salon is unique, so you’ll find a mix of these activities below.

Some lecturers may describe anatomical specimens they’ve come across in their work as medical historians. Some explain what an “alternative mortician” does. There have even been death salons featuring presentations on “death play” from professional dominatrixes. Of course, all these topics have one thing in common: death.

Death salons also tend to feature displays of items related to death and dying. In many cases, organizers actually choose venues based on displays that are already in place.

Consider the example of a 2015 death salon held at Philadelphia’s Mütter Museum. This location had displays of anatomical specimens, outdated medical devices, and even books bound in human skin. Sure, it sounds creepy (and to some people it is), but it’s the perfect setting for this type of event.

Some death salons also allow vendors to sell death-related items. Again, an example would be an artist selling unique urns.

Don’t make the mistake of assuming death salons are all somber and serious. Remember, their goal is to promote death positivity. That involves letting yourself have a good time while talking about death.

Thus, many death salons also include entertainment. This can come in the form of musical performances, film screenings, and more.

How Can You Find a Death Salon Near You?

Some of you reading this may respond with a resounding “Oh, no thank you” when asked if you’d like to attend a death salon. That said, odds are good a few of you understand the appeal, and would like to participate in the future.

The following are the best ways you can do so:

One of the easiest ways to stay up-to-date on the latest death salon news is to subscribe to the official Death Salon email list.

Doing so ensures you’ll be one of the first people to hear about upcoming death salons in your area. That’s key to getting a ticket before others claim them.

DeathSalon.org maintains a calendar of upcoming death salon events. Check it regularly to see if any are coming to your part of the country.

Consider following Death Salon and the Order of the Good Death on their various social media pages. These groups often use Facebook and related platforms to offer their followers updates about upcoming events.

By the way, if death salons interest you, death cafes might as well. These are informal gatherings of a few people—typically meeting together over baked goods and coffee or tea—who openly discuss death. The goal is to let the conversation develop organically.

A Positive Approach to a Scary Subject

We all have to grapple with the reality of death. That doesn’t mean we all have to fear it. As death salons prove, some people find comfort not by hiding from this subject, but instead by confronting it. And, perhaps you’re just that type of person.