Most people don't know the difference between an elegy and a eulogy. They both sound quite similar and it's easy to assume they might be the same. The difference boils down to the literary form. An elegy is a form of poetry and a eulogy is a form of prose. Elegies and eulogies also differ in timing, tone, length, message, intention, and recipient.

Let’s take a deeper look at these definitions.

An elegy is a poem or song that signifies grief for a deceased person. A traditional elegy is often described as having a tone of deep sorrow or remorse. The elegy is often an expression of active grief and sadness.

The word elegy comes from the word elegia which means "poem or song of lament."

A eulogy is a written speech that offers praise and honors someone after they have died. It is often read at a memorial or funeral service. The eulogy is an opportunity to express gratitude and praise for the deceased person.

The word eulogy comes from the Greek word eulogia which means "praise."

Know how you want to be remembered?

Create a free Cake end-of-life planning profile and share your choices with your loved ones, instantly.

Differences Between Elegies and Eulogies 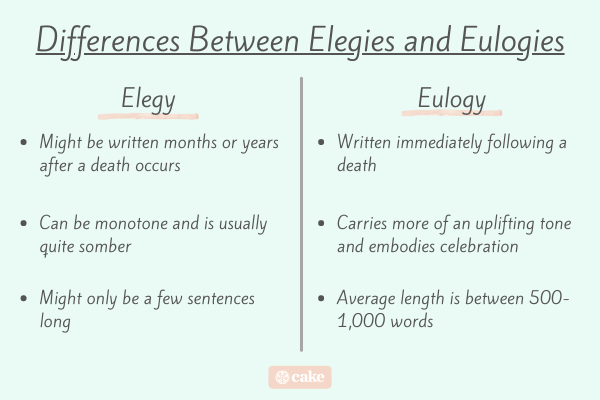 Some eulogies may include elegies. You may hear both eulogies and elegies during a funeral service. Here are some distinct differences between an elegy and a eulogy.

An elegy and eulogy are written after someone dies. A eulogy is written immediately following a death and after the obituary publishes.

A eulogy is not as time-sensitive as an obituary, but it does have a short due date. Unlike a eulogy, an elegy might be written months or years after a death occurs.

A traditional elegy can be monotone and is usually quite somber.

On the flip side, a eulogy carries more of an uplifting tone. Elegies convey emotional expression and eulogies embody celebration.

The average length of a eulogy is between 500–1,000 words. On the opposite spectrum, an elegy might only be a few sentences long.

Walt Whitman's famous elegy 'O Captain, My Captain!' written for Abraham Lincoln is only 69 words, but the impact is grand.

A eulogy often conveys more of a concrete and structured message. It paints a picture of someone's life and pays tribute to the wonderful things they did and who they were.

An elegy might do the same, but it's in a more abstract form. There might be more explicit meaning in a eulogy than you would find in an elegy.

Though both eulogies and elegies are subjective, the intentions might differ. Someone who is writing a eulogy may have an idea of how they intend the listener/readers to respond.

They might intend to evoke laughter or joy through their words. A person writing an elegy may have little intention on how they want their listener/reader to feel.

Who is it written for

People compose elegies and eulogies because someone has died. This doesn't mean that it is written for the person who died.

For example, a deceased loved one may inspire an elegy, but it is composed for the living. An elegy is a living expression of grief when faced with life without a loved one. A eulogy pays a tribute and is written in memory of someone who has died. 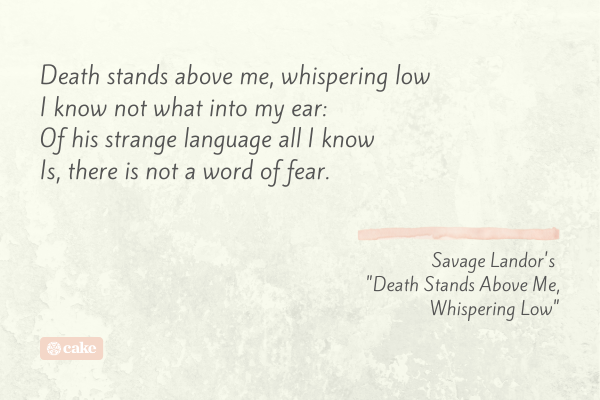 Here are some beautiful elegies written by famous poets and authors.

This poem was written for Douglas's young wife who died of cancer. It's a tragic account of one man's grief as he navigates the staircase he climbed to find his wife passed away.

He reflects upon his wife’s ways and laments his grief during her illness and after death.

Death stands above me, whispering low

I know not what into my ear:

Of his strange language all I know

Is, there is not a word of fear.

This short but potent elegy suggests that with death near, there is nothing to fear. When a loved one dies, we may be facing death for the first time. This poem acknowledges death and grief with a beginner’s mind.

This is a lengthy elegy written with a religious perspective after the passing of a dear friend.

This poem is known as one of the most notable elegies in the English Language.

Dylan Thomas's "Do Not Go Gentle Into That Good Night"

This is one of the most famous elegies ever written. It is often read at funerals and memorial services, especially if the deceased is a father. 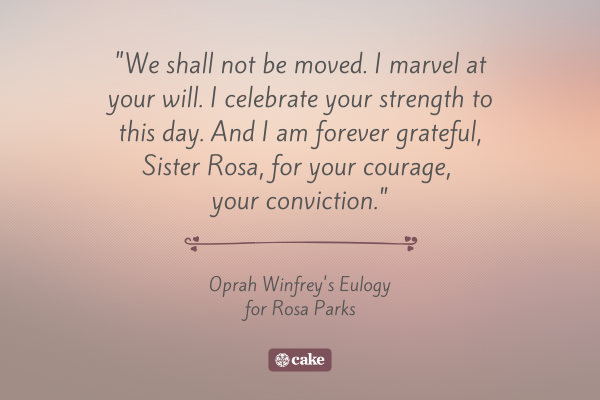 Here are some of the most famous eulogies written for, and by, notable people.

This is one of the greatest eulogies ever written. Oprah shared the impact of Rosa Parks and the direct impact she had on her life. Here is a snippet of her words:

"We shall not be moved. I marvel at your will. I celebrate your strength to this day. And I am forever grateful, Sister Rosa, for your courage, your conviction."

This eulogy is short but powerful. It conveys a message that Marilyn was many different things to many different people. Lee Strasberg adds humor and a potent truth at the end.

“I cannot say goodbye. Marilyn never liked goodbyes, but in the peculiar way she had of turning things around so that they faced reality—I will say au revoir. For the country to which she has gone, we must all someday visit.”

Written by 8-year-old Bindi for her father, this eulogy didn’t leave a dry eye in the crowd. She shares from the innocence of a child and with an ache only a fatherless daughter can understand. Their connection surpassed Steve's death and conveyed in these words:

"I know that Daddy had an important job. He was working to change the world so everyone would love wildlife like he did. He built a hospital to help animals and he bought lots of land to give animals a safe place to live. I don't want Daddy's passion to ever end. I want to help endangered wildlife just like he did."

This eulogy talks about the collective grief felt after losing one of the greatest leaders of all time.

Nehru shares that he was mistaken when he said the light of the world has gone out as a result of Gandhi's death. He admits that he was wrong in that thinking and conveys a message of hope for everyone.

“The light has gone out, I said, and yet I was wrong. For the light that shone in this country was no ordinary light. The light that has illumined this country for these many years will illumine this country for many more years, and a thousand years later that light will still be seen in this country, and the world will see it and it will give solace to innumerable hearts. For that light represented the living truth ... the eternal truths, reminding us of the right path, drawing us from error, taking this ancient country to freedom.”

The Power of Elegies and Eulogies

Both elegies and eulogies can have a great impact at a funeral service. They are similar in the sense that they both end on a positive note. An elegy may start off heavy, but the idea is to let the grief unravel and blossom into something beautiful. Much like a eulogy, it can tell a story or share a memory.

They are both intended to bring comfort for those left behind.

If you're looking for more, check out our guides on how to write a eulogy and how to start a eulogy.