Giving yourself permission to live a better life is a hurdle that a lot of people struggle with. That’s why there are so many songs dedicated to reclaiming your strength, power, and joy. So, if you can’t talk yourself out of the mental mischief and need some help, then you’re just one song away.

Who knows, you may find yourself creating a playlist from the songs below for the next time you’ve got a negative voice trying to take over. 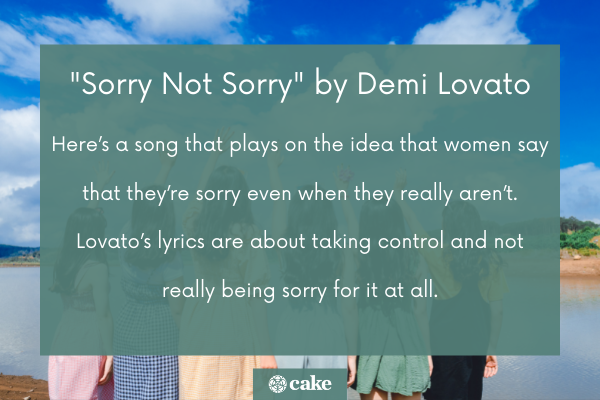 If you really want to make someone’s day, send them one of these songs when they need to hear it the most.

Pick the one that’s most appropriate one for someone tired of the double standards in dating, who needs reminding to speak with conviction or even a body positivity reminder. Then, they can charge forward with attitude.

1. "Can’t Hold Us Down" by Christina Aguilera and Lil’ Kim

One of the most frustrating things for women is the double standard. “Can’t Hold Us Down” addresses how things are okay for one group but not another, and the ladies singing aren’t going to take it anymore.

2. "Sorry Not Sorry" by Demi Lovato

Here’s a song that plays on the idea that women say that they’re sorry even when they really aren’t. Lovato’s lyrics are about taking control and not really being sorry for it at all.

Bareilles’ song is about not running, not “holding your tongue, escaping the cage, and also saying what’s on your mind.” It’s also about how to be brave despite not knowing the path ahead.

If you’re on board with the long-overdue body positivity movement, check out Sheeran’s song. Here, the attraction is certainly about something physical, but there’s nothing sung about a “type.”

Empowering Songs About Life and Self-Empowerment

Defining strength and empowerment is different for everyone. For some, finding your way forward means having the right mindset, while for others it means a supportive family, steadfast willpower, or maybe an easy, go-with-the-flow mentality. It all depends on your innermost goals.

One half of the song is filled with Keys’ amazing piano playing and some serious percussion. The other half is a songbird filled with lyrics about a girl’s determination and the unwillingness to back down.

Sia’s first words are about the demons that don’t let her sleep. Even so, she continues, she’s determined not to give up and repeats that throughout the song to fully cement the idea.

Here’s a song for when having a little still means that you have a lot to be grateful for. It’s also very empowering to find joy in life rather than in possessions.

If you’re the kind of person who finds motivation by living a chill lifestyle, then here’s a groovy remix. Both artists are from Sweden and garner tons of followers across multiple platforms.

There are two big messages in Daughtry’s inspirational song. One is that you can find yourself again, even if you may not recognize yourself immediately. Another is that you can challenge the people who don’t believe in you by succeeding.

Empowering Songs About Love and Break-Ups 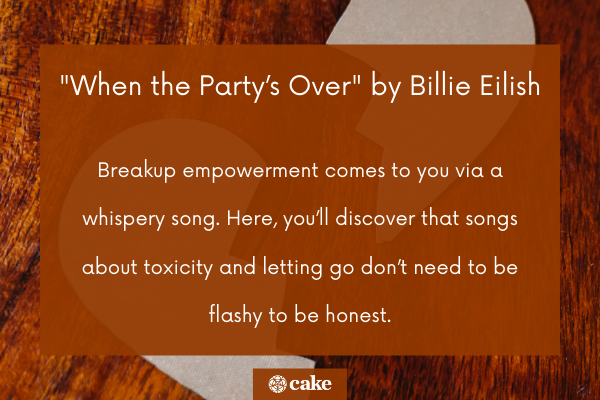 Whether you are seeking a song that’s a pick me up or a lesson, you’ll find one here. From Beyoncé to Billie Eilish, every artist listed below offers some words to live by.

King’s raspy voice is booming and full. Her song is about being confident in wanting whomever she wants, leaving exes in the dust, and being distressed when they always want to come back.

12. "When the Party’s Over" by Billie Eilish

Breakup empowerment comes to you via a whispery song. Here, you’ll discover that songs about toxicity and letting go don’t need to be flashy to be honest.

Halsey’s song calls it like it is and she’s not holding onto anything, either. It’s one of those songs that takes the pain of a breakup and turns it into a statement of seeking what you deserve, not just taking what’s available.

Few songs are more recognizable than this one when it comes to breaking up and having some seriously strong opinions about it all. You might relate to it if your ex has ever gotten a little possessive when someone else took notice of you after the breakup.

George Michael’s song is about knowing when to kick a relationship to the curb, especially if it means you’re waiting for something better down the road. Maybe you’ll agree with his words when he sings about how strong you have to be to let someone go you know won’t be devoted.

It’s tough being a kid! And they really need some encouraging quotes and songs that can help them remember how to be brave, be themselves, and find strength in their differences.

Although the subject of the song is seemingly about a wizard, it’s really just a sweet little metaphor for kids to be themselves.

17. "You Are Amazing" by Lindsay Müller

If people of any age could just repeat this to everyone they meet, the world would be more understanding, forgiving, and kind.

Here’s a great self and body-positivity song for kids. The lyrics offer that no matter what you look like, do, or say, you’re just right—and perfect.

19. "Be Yourself" by The Singing Lizard

“Be Yourself” is about finding comfort in your own skin. No matter what it is about you—it’s all perfectly wonderful.

Brush-it-off is the mantra in this song. No matter how many missteps or mishaps that happen, nothing needs to “keep you down.” 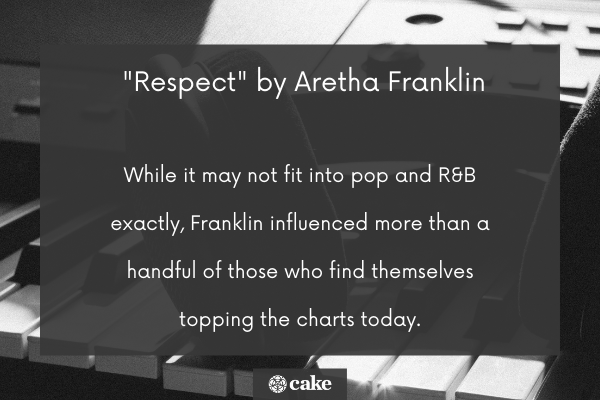 Play any of these songs, and you’ll be singing along or dancing. There’s a great mix of songs that are all dedicated to the strength you’ll find on the inside.

Here’s a great reminder that any outside drama or influence will not change the joy you feel on the inside.

Lizzo has been the face of inspiration across multiple platforms and genres. Her unapologetic nature speaks to a lot of people who seek to mirror her self-confidence, body-positivity, and overall strength.

Here’s one of those songs you’ll want to hear while you’re getting ready. It’ll get you singing and dancing so that when you hit the ground, you’re already running high and happy.

No empowerment list would be complete with a little R-E-S-P-E-C-T. While it may not fit into pop and R&B exactly, Franklin influenced more than a handful of those who find themselves topping the charts today.

If a relationship has consumed you, Dua Lipa has devised three new rules to help you see your way out from under the chaos. If you follow her lead, you may wind up in a relationship where you’re loved and respected, rather than someone’s doormat.

Country songs don’t beat around the bush. So, whether you are re-learning how to live well or love yourself despite the drama around you, you’re going to find one or two songs below that are right on the money.

This may not be your typical upbeat empowerment song, but there’s something to be said about facing adversity with your head high. Especially given that what breaks you is often when you live without feeling like you’re alive.

The lady has got some standards, and if he isn’t going to follow them, she won’t tolerate it. So, if you’re feeling like you have room for a few extra pointers, maybe Shania can help.

27. "Fat and Famous" by Ashley McBryde

Here’s a fun, fast little song about when the tables turn on your biggest high school bully. The idea is that they may have made you feel small and unappreciated back then but look at you now.

28. "Dust on the Bottle" by David Lee Murphy

There aren’t many who walk through life unscathed. If you’re like the rest of the planet and also like some classic country stylin’, then you might really enjoy "Dust on the Bottle."

If you feel like you’re being ushered in the same direction as everyone else, and also made to feel ashamed when you seek to pave your own path, then this song might end up on your playlist.

If you appreciate straight-talking and hate beating around the bush, then “GIRL” will speak to you. While everyone needs a moment to break down and feel emotions, there’s also a time to get up and dust yourself off.

Negative thoughts on repeat can be super destructive and harmful. So, one thing you can do to combat them is start listening to something more positive and empowering. Hopefully one of the songs listed above will help get you out of a mental funk a lot faster.