Study any culture in the world, and you’ll find they all have their rituals. That’s because rituals play an important role in our lives. Rituals can help us celebrate important holidays. They can allow us to remember a family member on their death anniversary. They often remind us that we belong to a larger community.

A ritual is merely any action that is repeated, whether it’s one of great significance, or simply a menial part of your routine. Some rituals take the form of grand ceremonies that occur at specific times of the year. Others are merely everyday tasks we go about without even truly thinking of them as rituals.

These examples will help you better understand the topic, clarifying not only what rituals are, but why they show up in just about all cultures. 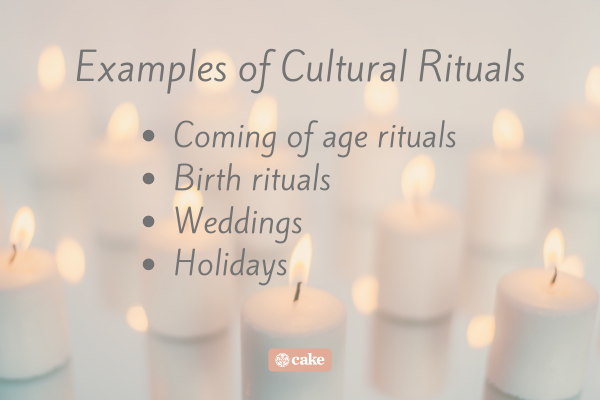 Rituals help cultures reflect on their shared values and experiences. The following are merely a few noteworthy examples:

Many cultures ritualize the moment when a child becomes an adult. Often, such rituals connect to a culture’s religious beliefs. For example, a bar or bat mitzvah is the coming of age ritual in the Jewish faith.

Some cultures perform circumcisions. In instances when families may not practice a particular religion, they might still have a ritual that involves introducing their child to the larger community in which they live.

Cultures often ritualize marriage. A wedding is another example of a ritual that may involve religious practices but doesn’t necessarily have to. As long as marriages follow certain established steps, they are technically a ritual.

Most holidays involve some form of ritual. Of course, the nature of these rituals will vary depending on the holiday and those celebrating it.

For example, giving gifts on Christmas is a holiday ritual. So is shooting off fireworks on the Fourth of July. Each serves very different purposes, but both are rituals that involve cultures coming together to mark significant occasions. 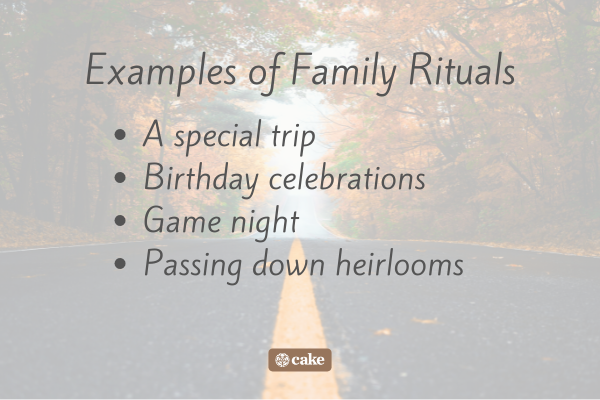 The examples above likely made clear that rituals often (but not always!) help people connect. Thus, it makes sense that many families have their own unique rituals. They may include:

Some rituals only last moments. Others may take place over a few days or even weeks.

Consider the example of a family vacation. Many families travel to the same spot every year. They might ritualize the experience by eating at a special restaurant every time they go, playing the same games during the trip there, and more.

A ritual doesn’t need to be an official cultural ceremony to be meaningful to someone. The special traditions you and your loved ones share count, too.

Every family is different, but many practice the same general rituals of celebration for each member.

As you’ve probably realized by now, rituals don’t necessarily need to correspond with major life events or occasions. Sometimes they are simply regular practices people share to strengthen their bonds and have fun.

An example of such a practice is a weekly game night. In many families, sitting around the table to play fun games is a common ritual that helps keep the family close. (Unless they decide to play Monopoly.)

It’s worth noting that in some cases, long periods may pass between rituals. For instance, in many families, older members pass down family heirlooms when their children or grandchildren reach a certain age.

While this ritual may serve a variety of purposes depending on its specific nature, in general, such rituals remind us that as members of a family, we are all like links in a chain that extends through the generations. 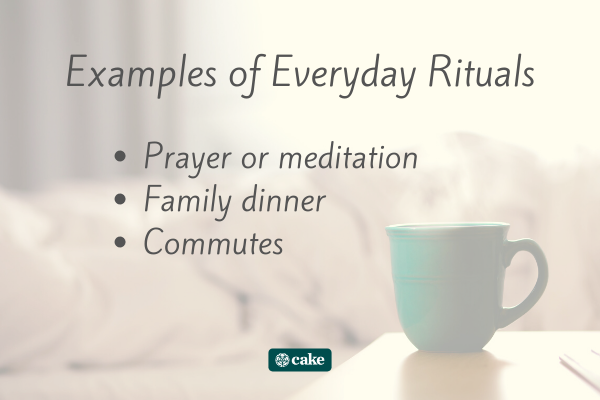 Once more, rituals are important in society for a variety of reasons. One is the simple fact that most people practice some sort of ritual just about every day. Examples may include:

Not everyone makes a point of praying or meditating every day. For those that pray, daily prayer gives them a chance to reflect on what they are grateful for, ask that those they love remain safe, and seek guidance from a higher power.

Others meditate as a way to practice mindfulness and maintain awareness throughout their life. Some people even meditate as part of their search for enlightenment. Each of these practices is an example of a daily ritual.

Rituals can be simple ways to reconnect with the ones we love. That’s why a family dinner (or any other daily meal) is an everyday ritual for some people. When the family gathers around the table, they have the chance to tell one another about whatever is going on in their lives.

Some families have dinner together every night, others gather once a week or invite the extended family on Sundays. Each is an example of a ritual.

Hey, no one said all rituals are necessarily fun! But, because people often ritualize their commutes, it’s worth touching on this example.

Whether your commute ritual involves your morning coffee, listening to your favorite podcasts on the train, or simply kissing a loved one goodbye for the day, the steps you take when heading to work in the morning fit the description of rituals.

Examples of Death or Remembrance Rituals 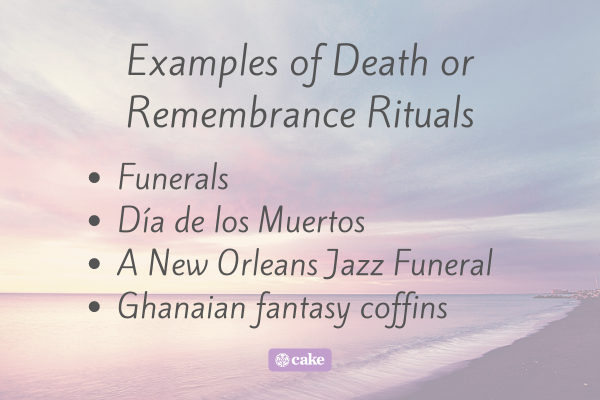 Anyone who reads this blog regularly likely understands that the way people acknowledge death in different cultures often involves rituals, such as lighting a candle for a loved one who has passed on. Other examples of death rituals include:

A funeral is probably the simplest example of a death ritual because it’s the most well-known. That doesn’t mean all funerals are the same.

Not every culture lays the dead to rest with the burials or cremations common in the United States. For example, some Tibetan Buddhists ritually dissect the bodies of the recently deceased, leaving them out in the open so vultures can eat them.

Other cultures traditionally dress the bodies of those who have recently died in their normal clothes, carrying them around in parades before burying them.

Día de los Muertos, or Day of the Dead, is one of the world’s most well-known and recognized death rituals.

On November 1 and 2, many in Mexico and some South and Central American cultures celebrate life by honoring the dead. Common sights during Day of the Dead include people dressed as skeletons, shrines to the dead, and candy skulls.

Not everyone conducts funerals the same way. A New Orleans Jazz Funeral, for example, is so unique that it deserves its own spot on this list.

It’s also exactly what it sounds like. After a funeral service in New Orleans, sometimes people march to the burial site with a brass band leading the way. The band traditionally plays “When the Saints Go Marching In.” This practice started to become relatively common in the late 1800s, and like Day of the Dead, it takes what could be a somber moment or subject, and turns it into something more festive and joyful.

Now for something a little unexpected, but definitely interesting.

Some people in Ghana don’t settle for typical coffins when burying loved ones. Instead, they choose fantasy coffins designed to look like everything from cars to animals.

This isn’t because these coffins look unique. Those who bury friends and family in them believe that life continues after death. That means they also believe a person’s work may continue after death as well. Thus, they bury them in a coffin that symbolizes their job. For example, if someone worked for an airline while they were alive, their loved ones might bury them in a coffin shaped like an airplane.

Post-planning tip: If you are the executor for a deceased loved one, the death rituals of the ceremony won't be the only thing you have to deal with. Handling their unfinished business can be overwhelming without a way to organize your process. We have a post-loss checklist that will help you ensure that your loved one's family, estate, and other affairs are taken care of.

Rituals: A Part of Everyone’s Life

Even if you didn’t realize it, by now you understand that you practice rituals throughout your own life. Some help connect with family members, some help remember those who have passed on, and some remind of cultural heritage.

While the specific rituals we practice may vary, the fact that we practice rituals is something that binds just about all of us.