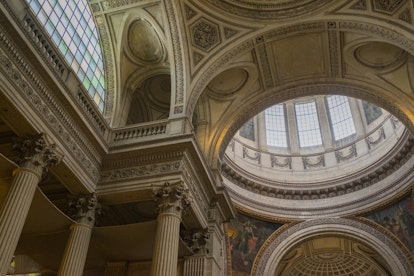 Although underground burial is a common way to handle a body after someone dies, it’s by no means the only option. Some people choose to inter bodies in aboveground mausoleums instead. A mausoleum is essentially a building that houses tombs or crypts for the dead.

In fact, throughout human history and in various parts of the world, many people choose mausoleums. In fact, several mausoleums are among the world’s most famous historical sites.

Our list doesn’t include all the famous mausoleums in the world but it’ll help you better understand what’s inside a mausoleum and the important role these buildings have played in numerous cultures and eras.

The two entries from this section of the list illustrate the ways specific mausoleums can differ from one another based on their purposes. Some are home to the bodies of many different people, making them no different from public cemeteries, while others may serve as the final resting place for only a few significant figures.

Central Cemetery of Bogotá isn’t just a mausoleum. It’s also a traditional cemetery. However, its grounds are home to some of the most famous mausoleums in South America.

The cemetery has earned this status thanks to its elaborate designs. Since the cemetery opened in 1836, the changing designs and purposes of the various mausoleums on the property has also indirectly functioned as a representation of different periods from Colombia’s history.

This isn’t the case at Central Cemetery of Bogotá. It’s home to graves and mausoleums for presidents and famous cultural figures and the resting place for numerous regular citizens as well.

That said, sometimes these ordinary civilians become famous after their deaths. Consider the example of the Bodmer sisters. According to legend, in 1903, they died of a mysterious illness. When their mother visited their grave at the cemetery, she asked that her youngest son avoid the same fate. They supposedly granted her wish. Now, people continue to visit their graves to pray for the health of children.

Although the Lincoln Tomb in Springfield, Illinois, is somewhat different from other mausoleums due to the fact that Lincoln is technically buried underground, the site is so historically and culturally important in the U.S. that many consider it to be a famous mausoleum regardless.

Inside the mausoleum, while following the hallway that leads to the burial chamber, guests can see small-scale versions of famous Lincoln statues and plaques featuring excerpts from important Lincoln addresses. Along with serving as a mausoleum for President Lincoln, the Lincoln Tomb is also home to the bodies of Mary Todd Lincoln and three of their sons: Edward, William, and Thomas.

Because many famous mausoleums have existed for quite some time, their function can change over the years.

The Panthéon’s Greek architectural style makes it stand out in the streets of Paris. Construction of the building began in 1757 and its initial purpose was to replace an older church.

However, during the French Revolution, it became a secular building, functioning as a monument to great figures in French history. Now it’s a mausoleum consisting of many famous graves, including those of Voltaire, Victor Hugo, Marie Curie, and many others.

The mausoleum got the name most call it by today thanks to a story involving Pope Gregory the Great. In 590, while praying for an end to the plague, the Pope reportedly had a vision of the archangel Michael placing his sword into its sheath above the building. The Pope interpreted this as a sign from God telling him the plague would end. Now, a marble statue of the archangel sits atop Castel Sant’Angelo.

Guests can now tour parts of the mausoleum that have been converted into a military museum. Throughout its history, Castel Sant’Angelo has also served as a fortress, military barracks, and prison.

Africa is home to so many famous mausoleums it would be impossible to cover them all in a single blog post. These are simply a few major examples.

The Pyramids of Giza may be the most famous pyramids in the entire world. So many are familiar with these iconic structures that some often forget they technically qualify as mausoleums for various Egyptian kings.

The Great Pyramid is the largest of the three. Its original height was just over 480 feet, but like all the Pyramids of Giza, it’s now somewhat smaller than it once was due to its limestone outer casing stripping away over the centuries. It’s also the oldest and is home to Khufu, Egypt’s second king from the 4th dynasty. The official name of his burial chamber is the King’s Room, accessible via an entrance on the structure’s north side, which leads to a long, narrow passage.

It’s worth noting that Al-Khazneh, in Petra, no longer functions as a mausoleum. Historians believe its inner hall was once a royal tomb, but this isn’t the case now.

Still, Al-Khazneh deserves a quick mention because it’s become among the most famous mausoleums in the world thanks (at least in part) to Hollywood. The structure’s creators actually built it into the side of a sandstone cliff, completing it with a striking outer facade. This incredibly unique work of engineering was impressive enough to convince Steven Spielberg to use the site for a climactic scene in “Indiana Jones and the Last Crusade.” In doing so, he introduced many viewers to an important Jordanian landmark.

King Hassan II commissioned the construction of the Mausoleum of Mohammed V (or Mohammed V Mausoleum) to serve as the final resting place for his father in 1962, making this site relatively newer compared to many others on this list. It actually has two functions — it’s both a mausoleum and a mosque.

The mausoleum is also one of the few Muslim holy sites open to the public. Both Muslims and non-Muslims are free to visit it. Many staying in or near Rabat, Morocco, make a point to do so. The building’s architecture and interior design are particularly striking, featuring granite floors, carved ceilings, gorgeous chandeliers, and a wide range of other noteworthy features.

Famous Mausoleums in Asia and Australia

These entries are interesting, as they demonstrate both key differences and key similarities between historic mausoleums and modern mausoleums.

If it wasn’t for the Pyramids of Giza, the Taj Mahal would debatably be the most famous mausoleum in the world. Emperor Shah Jahan commissioned the project around 1632 to serve as a mausoleum in honor of his beloved wife, Mumtaz Mahal.

Constructing the Taj Mahal was no small feat. Historians agree construction of the mausoleum itself probably ended in 1648, and construction on various outdoor areas didn’t end until 1653. Approximately 200,000 workers played a role in the Taj Mahal’s construction over the years. In order to devote a workforce that large to the project, Shah Jahan hired workers not only from India, but from Persia, the Ottoman Empire, and parts of Europe.

The Taj Mahal is home to only two bodies: those of Mumtaz Mahal and Shah Jahan. Many now consider this architectural wonder to be one of history’s most striking symbols of enduring love.

Most of the famous mausoleums on this list are historic buildings. The Gatehouse Mausoleum is an exception. Construction of this Melbourne mausoleum began as recently as 2004. However, it deserves our attention because it reminds us that mausoleums play a role in the way they represent the culture and art of a given time and place.

Such is the case with the Gatehouse Mausoleum. Over the past few years, it’s earned the attention of architecture enthusiasts around the world. They note how the design’s unique textures and angles create an interesting effect inside the mausoleum, with shafts of light contrasting with shadowed areas. The ceiling also features skylights that resemble stained glass, thanks to the deliberate placement of strips of color.

If you're looking to read more on famous burial sites, read our guides on the Ming Dynasty Tombs and the Paris Catacombs.