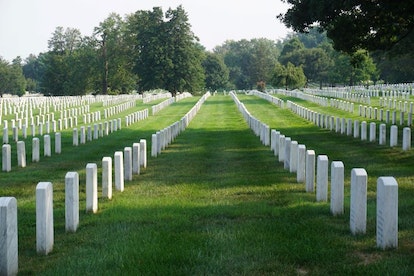 If you visit this landmark, which sits near the Washington Monument, you’ll have the opportunity to honor some of the great men and women who’ve served the United States.

Below are some of the most famous graves at Arlington National Cemetery in Virginia. From presidents to notable veterans of every American conflict, you’re sure to recognize many of the names on this list.

One of the ways you can earn a burial at Arlington National Cemetery is by serving as President of the United States. As Commander-in-Chief, the President is an important serving member of any American conflict. In addition to earning their own graves at Arlington, the families of American presidents may be buried there.

Below are the presidents (and their family members) who have been interred at Arlington.

President William H. Taft was the 27th President of the United States, and he was the first President buried at Arlington National Cemetery. He lived from 1857 to 1930. Taft is notable as the only U.S. president to have served as Chief Justice of the U.S. Supreme Court.

William H. Taft died on March 11, 1930. His funeral was simple, with no eulogies were given, at his own request. He insisted, before his death, that only poetry by Tennyson and Wadsworth be read at his service. There was, however,  an elaborate funeral procession from the Capitol, provided by the 3rd Infantry Regiment, on the way from Taft’s funeral to his burial at Arlington.

Taft’s family chose a large plot in an area of the cemetery that was relatively undeveloped at the time. After his burial, William H. Taft’s widow commissioned a sculptor to design a unique headstone for the plot. The headstone was completed in 1932 and cost the Taft family $10,000. The 14-foot granite Taft Monument now stands beside a brick plaza, which the cemetery added later on.

President William H. Taft is buried in Section 30 of Arlington National Cemetery. His wife, Helen Herron Taft, was buried beside him on May 25 of 1943.

President John F. Kennedy was the 35th President of the United States and the second President buried at Arlington National Cemetery.

Kennedy first visited Arlington on November 11, 1961. It was Veteran’s Day, and he was there to hold a ceremony and give a speech at the Memorial Amphitheater. Just 11 days before his assassination, in 1963, John F. Kennedy returned to Arlington for the second time. He reportedly stood on the hillside in front of Arlington House and told a park ranger, “I could stay here forever.”

President Kennedy’s state funeral was at 3:00 PM on November 25, 1963. Notable persons from around the world were in attendance, and 50 Navy and Air Force jets flew overhead. Millions of people watched the service live at home on their televisions.

Kennedy’s plot at Arlington was originally 20 feet by 30 feet, enclosed by a white picket fence. In the first months following his burial, upwards of 3,000 people every hour visited Arlington National Cemetery to view the gravesite. On weekends, up to 50,000 people visited the site.

Because of the crowds, cemetery officials and the Kennedy family decided to construct a more suitable site. The new monument was completed on June 20, 1967, and features an eternal flame burning at the center of a granite circle. First Lady Jackie Kennedy initially lit the eternal flame herself.

President John F. Kennedy is buried in Section 45 of Arlington National Cemetery. Members of President Kennedy’s family buried or memorialized with him at the cemetery include:

» MORE: The practical steps after a loss can be the hardest. This checklist explains everything you need to do.

Presidents aren’t the only famous people buried at Arlington National Cemetery in Virginia. Veterans who earn medals of honor and other notable mentions can be buried in one of the nation’s national cemeteries.

Here are some of the most famous veterans buried at Arlington National Cemetery.

Robert “Bobby” Kennedy, one of John F. Kennedy’s younger brothers, isn’t only buried at Arlington because of his famous family member. Robert F. was a World War II veteran. He also served as an attorney general and a senator, as well as a 1968 presidential candidate.

Robert F. Kennedy was assassinated on June 5, 1968, shortly after he won the 1968 Democratic Primary in his bid for the Presidency.

His gravesite, adjoined to that of JFK, features a simple white cross and inscriptions of some of his most memorable quotes.

Robert F. Kennedy is buried in Section 45 of Arlington National Cemetery within the Kennedy Monument.

Walter Reed was a pioneer in the medical field. He served in the U.S. Army as a physician in the Spanish-American War. As a bacteriologist, Walter Reed led the way in major medical breakthroughs that saved the lives of American Army soldiers and civilians alike.

Reed is best known for his work conquering yellow fever. He and his team made discoveries (primarily that mosquitoes transmitted the disease) that would change the way the Army conducted medicine. Walter Reed Army Medical Center was founded in 1909 in Major Walter Reed’s name.

Walter Reed is buried in Section 3 of Arlington National Cemetery in Virginia.

Gen. George C. Marshall was one of the most distinguished leaders of the U.S. military in the 20th century. Marshall served as Chief of Staff in the U.S. Army during World War II, and he conducted the largest expansion of the Army in history. Gen. Marshall oversaw and directed the growth of the U.S. Army from less than 200,000 members to over eight million.

Later on, Marshall would serve as a five-star General of the Army (the nation’s highest rank), as well as President Truman’s Secretary of Defense. Marshall is the only person in history to have held both ranks.

But George C. Marshall is best known for his “Marshall Plan” (an economic growth strategy for postwar Europe), which earned him the Nobel Peace Prize in 1953.

Major Audie Murphy was one of the most decorated soldiers in American history. He grew up in poverty on a Texas farm and falsified his birth certificate to serve in the military when he was only 17.

Audie Murphy fought in North Africa, Italy, and France during World War II as part of the 3rd Infantry Division. He earned every U.S.  military combat award possible, as well as French and Belgian military awards.

Murphy’s best known for single-handedly holding off an entire German company for an hour in France in 1945.

Audie Murphy is buried in Section 46 of Arlington National Cemetery.

Abner Doubleday is sometimes credited as the man who invented baseball, but this is just a myth. Doubleday did, however, fire the first cannon shot on the Union side during the Civil War.

Doubleday was a graduate of West Point, and he fought in the Mexican-American War. By 1961, he was second-in-command at the U.S. Army’s garrison at Fort Sumter in South Carolina. Secessionists attacked the fort in April of that year, which officially began the Civil War.

Abner Doubleday commanded troops in famous battles, including the Second Battle of Bull Run and Gettysburg.

Abner Doubleday is buried in Section 1 of Arlington National Cemetery.

Not all war heroes have famous names. On average, 28 burials and military funerals take place at  Arlington National Cemetery every single weekday, for a total of almost 6,900 burials per year.

Most of those burials are of men and women who served their country as war heroes but weren’t well-known in life. There’s even a monument at the cemetery—the Tomb of the Unknowns—for unidentified war veterans.

So while Arlington National Cemetery is a site of many famous burials, it’s also a place of solemn remembrance for those whose names aren’t as well-known.