Did you know that filial piety guides entire countries in the way they treat older parents, grandparents, and older siblings? Showing respect toward parents is common, but filial piety raises it to an art form.

Children raised with the concept of filial piety grow up understanding that their elders should receive excellent care as they get older. For many, filial piety is not just a responsibility, but a solemn religious duty.

What Does Filial Piety Mean? 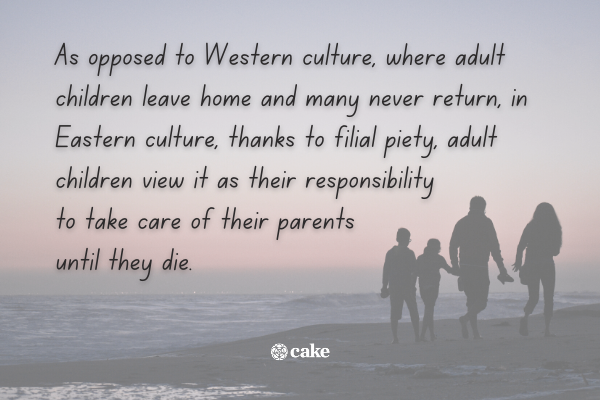 Filial piety is the honor and respect children show their parents, grandparents, and elderly relatives. For example. when children demonstrate filial piety in China, they are viewed as trustworthy and respectable. Children who don’t show respect to the elderly in their lives are viewed as shameful and of a bad character.

While respect shown to all older adults can be viewed as a form of filial piety, the deepest dedication is to be given to parents alone. Filial piety is seen in many Eastern cultures through submission to the wishes of parents. They must help the elderly by making them happy and comfortable during the final years of their lives.

Where Does Filial Piety Come From? 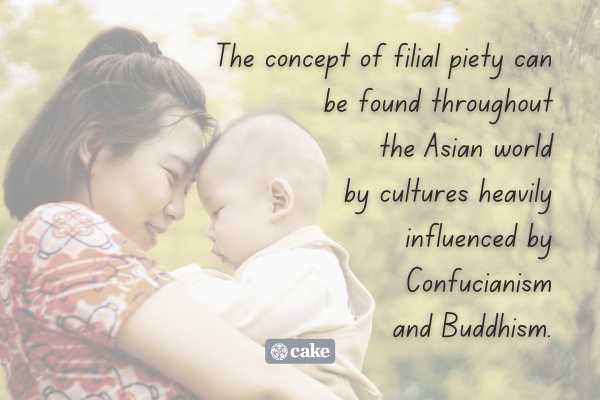 Filial piety is a Confucian philosophy. Parents raise their children, clothe them, feed them, bathe them, and make sure that the first half of their lives are lived in peace, comfort, and harmony. Confucian philosophy says that for the second half of their lives, adult children will take care of, feed, clothe, honor, respect, and serve their parents.

According to Confucian philosophy, filial piety is considered to be the greatest of all virtues and should be demonstrated to both the living and the dead. At its core, filial piety deals with the level of respect and obedience a child must show their parents. Since filial piety extends to both the dead and living, ancestor worship was formed from this Confucian teaching.

This concept of bestowing honor and respect became so ingrained into Chinese culture that laws were built around filial customs. It also led to unequal systems of relationships.

For example, in China’s early days, if a child committed a crime against a parent, their sentence would be far heavier than if the same crime was committed by the parent against the child.

In both Chinese and Indian Buddhism, filial piety played an important role in both cultures. Karma, the idea that your actions will come back to you for good or for bad, was fundamental in creating a system of filial piety. According to some scholars, filial piety was not just part of karma but was the best thing you could do to produce good karma in your life.

In Buddhist teachings, the Buddha said that children were to honor parents as though they were honoring Brahma (God), support and respect their parents to pay back the debt of childhood, and perform extra good deeds for their parents to accumulate merit and beneficial karma. 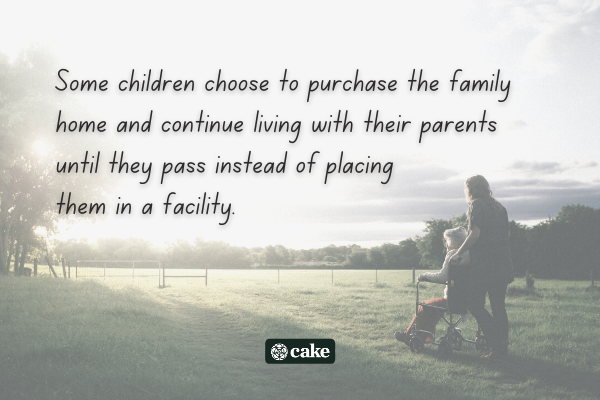 While the concept of filial piety is connected to Chinese culture, it can be seen in many parts of the world today from East to West.

In many parts of the world, once parents finish raising their children and adult children get married, roles start to reverse. As parents become older, parents will move in with one of their married children. In most Eastern cultures, parents move in with a son. The son, daughter-in-law, and grandchildren then support the parents. All their needs are met and they are provided with shelter, food, clothing, and comfort.

In the West, in America and Europe, a single child might choose to move in with their older parents. The son or daughter will care for them, cook, and supply their basic needs. In some cases, if the single caretaker child gets married, they will continue to live with the parents.

Some children choose to purchase the family home and continue living with their parents until they pass instead of placing them in a facility.

Regardless of whether parents are living with their children or not, there will come a time when elderly parents need someone to handle their finances. If they are incapable of leaving their house and performing tasks such as cashing checks, visiting the bank, or paying bills, their children will take over for them. This is seen as a significant responsibility and a way to show honor to parents.

Children are responsible for handling money as if they are an employee tasked with paying bills on time and making sure that the money stays safe. According to filial piety, taking money or payment for handling parents’ finances is seen as thievery and is deeply shameful.

With the continued increase of globalization, more children are moving farther from their parents for jobs, opportunities, and a shot at having a better life. When this is the case, children won’t be living near or with their parents.

To make up for the distance, some children choose to support their parents financially. If parents are not well off but they can live at home, they’ll be supported with funds from their children. If they need help while living at home, support may be offered to hire in-home help. Though not physically present, filial piety guides children in providing help for their parents so they can live as comfortably as possible.

In Chinese culture, and many countries around the world, filial piety can be seen in the way children honor parents when they pass away. Death in different cultures will be responded to uniquely, however, many similar concepts are shared.

While a dedicated mourning of period is not typical in most of America, many places and cultures around the world reserve specific time set aside to properly mourn parents. If the mourning period is broken, it appears shocking, scandalous, and sends a message that the child does not respect the parent who has passed.

In some locations, children are expected to host elaborate funerals and hire professional mourners to demonstrate their filial piety. Without the outward display of loss, the community might view the children with shame because they did not demonstrate that they loved their parents.

In addition to honoring a deceased parent during the funeral, there are numerous opportunities for children to honor their parents afterward. Placing incense, food, and other offerings for their parents on altars during different festivals is one way filial piety is demonstrated.

In Korea, they honor their deceased relatives through the Jesa ceremony. They believe the spirits of departed relatives stay on earth and care for their families for several generations. During the Jesa ceremony, Korean children will honor deceased ancestors by placing food and drink in a shrine and cleaning tombstones of dirt and grass.

In Chinese culture, they celebrate the Hungry Ghost Festival. During this time, it is believed that the ghosts of departed relatives come back and a child is expected to place food and drinks out for their parents or other elderly deceased relatives.

There are other traditions to be followed during the holiday, but each reflects respect for the dead through filial piety.