Are you curious about your own Filipino background or you have a funeral to attend? There are some regional rituals you may want to know before you attend a Filipino funeral.

The first thing you need to know is that many Catholics live in the Philippines — you may want to become familiar with Catholic traditions before you attend a Filipino funeral.

No matter what a family's culture and traditions are, planning or attending a funeral is hard. So, too, are the many other tasks you might face after the death of a loved one. If you'd like some help and guidance through the process, check out our post-loss checklist.

COVID-19 tip: If you're planning or attending a Zoom funeral using a service like GatheringUs, the order of service, etiquette, and timing will vary. Consult with the funeral director, event planner, or religious leader to see what changes will be made to the ceremony, wake, and reception.

Filipino Beliefs or Superstitions on Life and Death 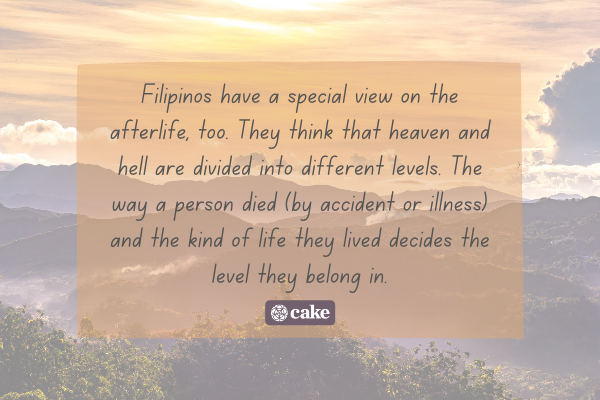 The Philippines have a long history of colonization that influences its Catholic culture. Before Catholicism, both Hindu and Buddhist beliefs were practiced on the islands. These religions still shape Filipino beliefs about life and death.

Filipinos have a special view on the afterlife, too. They think that heaven and hell are divided into different levels. The way a person died (by accident or illness) and the kind of life they lived decides the level they belong in.

You may see certain traditions followed at the funeral:

You will find that most Filipinos avoid hospitals. The family cares for the sick until they die in the comfort of their own home. The family also comes together to take care of and grieve for their loved ones.

Tip: If you're planning a virtual Filipino funeral using a service like GatheringUs, you can still practice the traditions described below. You just have to get creative! Speak with your funeral director or event planner to see what rituals they can adapt for you.

Filipinos fall back on Catholicism when someone dies. The family stops all normal activities to prepare the home and body for visitation.

Here’s an example of a modern Catholic funeral service you may encounter:

The funeral you attend will most likely follow regional customs, too. The Ilocano people are the third-largest ethnic group in the Philippines and live on the largest island, Luzon. Here are some Ilocano traditions:

You can expect friends and family to sing sad ballads during the wake. The family chooses traditional Catholic funeral songs for the procession and funeral.

You will see elaborate flowers and decorations around the casket. Expensive flower arrangements show respect for the deceased. It’s a good idea to bring flowers for the grieving family to communicate your condolences.

Food is a central part of Filipino funerals. The family prepares dishes for every day of the wake. Filipinos believe that spending money on meals is also a way to show respect for the deceased.

Eating certain foods is taboo among the Ilocano regional culture. For example, eating horseradish, sour foods, or snails could cause another death in the family. If you attend a regional wedding, make sure to ask ahead of time what types of food customs you may encounter.

From the day of the death of a loved one, you will find friends and family gathering at the home of the deceased in prayer. Forty days of prayer will help the dead reach the afterlife.

Like Mexican and Puerto Rican funeral customs, novena prayers are said. Prayer warriors choose a different prayer for each day, share a meal after prayer and make a food offering for the deceased.

Traditions in the Philippines vs. Filipino-American funerals

Filipino-American weddings are more traditional than regional funerals in the Philippines. Filipinos remain close to their Catholic faith after they immigrate to the U.S.

You may want to familiarize yourself with the superstitions and the 40-day traditions mentioned above — these are common at any Filipino funeral. 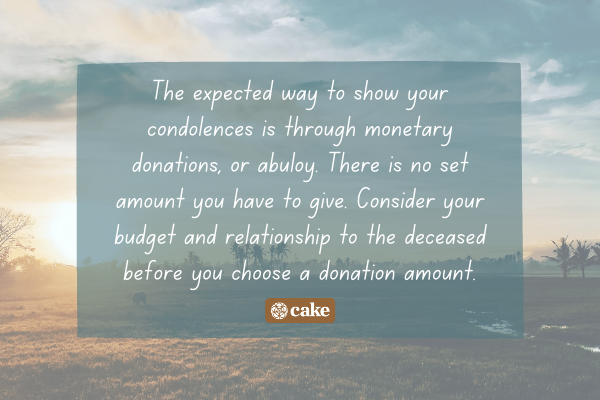 The Filipino people don’t view death as the end of life, and their funeral etiquette is a reflection of the happy people they are. You will find immediate family flooded with support to keep them distracted from grief.

What to wear to a Filipino funeral? It’s appropriate to wear black and for women to wear a black veil. You may also wear white, grey, or other dark colors at both the wake and funeral. As long as your attire isn’t casual, it shows respect for the family.

Friends and family don’t sleep during the length of the wake. The family serves meals to mourners.

The mourners play card games to keep themselves awake. It may be surprising to see mourners placing bets on card games and bingo. At first glance, it might seem disrespectful to drink and make spider fighting bets. But the family of the deceased receives the donations for funeral expenses. It’s also not uncommon to find mourners who play mahjong next to the coffin.

You’ll see open displays of grief when the family isn’t distracted by festivities. Mourners may faint, sob, and cling to their loved one’s body. The Ilocano people hire mandung-aw, or mourners, who wail throughout the wake and funeral. In Filipino culture, the more lavish the funeral, the greater the family’s standing.

Role of presents or condolences

The expected way to show your condolences is through monetary donations, or abuloy. There is no set amount you have to give. Consider your budget and relationship to the deceased before you choose a donation amount.

If you cannot attend the funeral, a sympathy card or flowers can be thoughtful gestures, too.

Filipino Burials and Mourning the Deceased

The deceased are traditionally buried in graves, but burial plots are expensive. More people turn to alternatives like cremation instead. Burial practices differ depending on where your loved one died.

Immediate family members and even friends mourn the deceased for a long time. It’s not uncommon for a widow or a woman who has lost her children to wear black for the rest of her life. The family holds a mass for the deceased several times during the year that they pass. Filipinos also celebrate All Saints’ Day, where they return to the gravesite to pay respects. 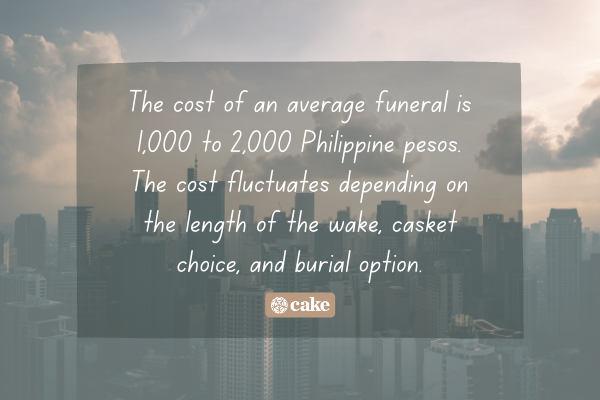 Customs at Filipino funerals are different than traditional Catholic ceremonies. Here are some answers to common questions that you may find helpful.

How long is a Filipino funeral?

Visitation is longer than other funeral traditions but the burial ceremony is usually short. After the mass, the procession moves to the graveside for a quick burial.

Regional customs are longer. The Benguet Islanders sit the dead on a chair next to their house for eight days. The Itneg bury the dead under their home, which takes longer than the usual burial.

How much does a funeral cost in the Philippines?

The cost of an average funeral is 1,000 to 2,000 Philippine pesos. The cost fluctuates depending on the length of the wake, casket choice, and burial option. Costs place a heavy burden on families that may already be at the poverty line.

How much money should you donate at the funeral?

Donations are expected, but there is no required amount. As long as you remember to make a donation, you can feel comfortable with your decision.

If you’re hosting the funeral, what do you do with all of the donations?

The family uses abuloy, or donations for funeral or burial expenses. They can also pay the “prayer warriors” that pray for the deceased until the 40th day.

Filipino Funerals: What to Remember

Filipino funerals are life events that are as important as births or weddings. Remember to respect any wishes the family has and don’t forget to have a donation ready.

You’ll know what to expect when you’re already familiar with Catholic customs. But now that you know about regional customs, you can plan or attend a Filipino funeral, too. Keep these guidelines in mind and don’t forget to smile — for Filipinos, a funeral is as much about life as it is about death.