Maybe you’re visiting Brazil during Dia de Finados, or perhaps you’re just curious about how different countries celebrate the Day of the Dead. Either way, you’ll learn all about Brazil’s Day of the Dead, from its history and origin to its modern-day rituals, below.

What is Dia de Finados? 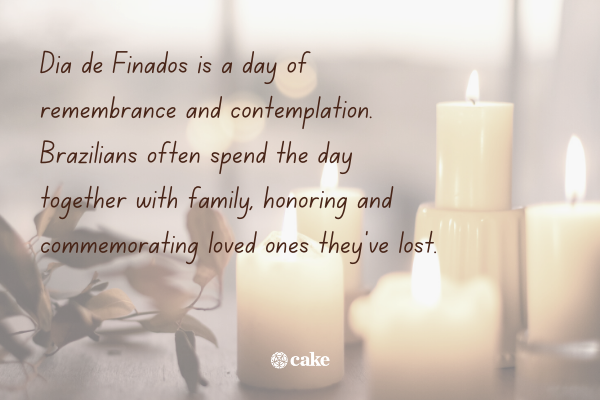 Primarily, Dia de Finados is a day of remembrance and contemplation. Brazilians often spend the day together with family, honoring and commemorating loved ones they’ve lost.

The day represents the emotion of saudade, a word that represents a feeling and only exists in Portuguese. Saudade is the feeling caused by distance from someone or something you hold dear.

On Dia de Finados, Brazil honors the feeling of saudade by commemorating distant, departed loved ones.

Legend has it that All Souls’ Day began in the year 998 when the leader of a French Monastery ordered his followers to honor the faithful departed. While All Saints’ Day only commemorates Catholic saints, All Souls’ Day is dedicated to praying for all of the souls of the departed. From France, the holiday known as All Souls’ Day spread across Europe, including Spain.

When Spanish and Portuguese Catholics arrived in South and Central America, the rituals and traditions of All Souls’ Day joined together with indigenous heritage. In Mexico, this combination created Día de Los Muertos; in Brazil, the mixing of the two cultures created Dia de Finados.

While you can find Day of the Dead celebrations in many countries worldwide, Dia de Finados is unique to Brazil. It’s a public holiday, which many people have off from work or school. Unlike Día de Los Muertos, though, Dia de Finados is a subdued day of quiet introspection for most people.

If you happen to visit Brazil during Dia de Finados, you might catch a historical demonstration at a cultural center, or small family gatherings here and there. But you won’t find large gatherings and festivals like you might for Day of the Dead in other countries.

When is Dia de Finados in Brazil?

Dia de Finados takes place on November 2 every year in Brazil. This aligns with the Catholic holy day of All Souls’ Day, which is dedicated to honoring the souls of the faithful departed.

It can be easy to mistake Dia de Finados with other holidays that take place around the same time. Halloween is just two days earlier, on October 31. And the Catholic holy day of All Saints’ Day is just the day before, on November 1. To make matters even more confusing, the Mexican holiday of Día de Los Muertos lasts from October 31 through November 2.

But Dia de Finados is a one-day holiday, held on November 2. It doesn’t have anything to do with Halloween, and it’s separate from All Saints’ Day. As mentioned, All Saints’ Day honors only Catholic saints, while All Souls’ Day honors the souls of all those who’ve died.

The holiday of Dia de Finados pays respect to all departed loved ones, rather than venerated saints. 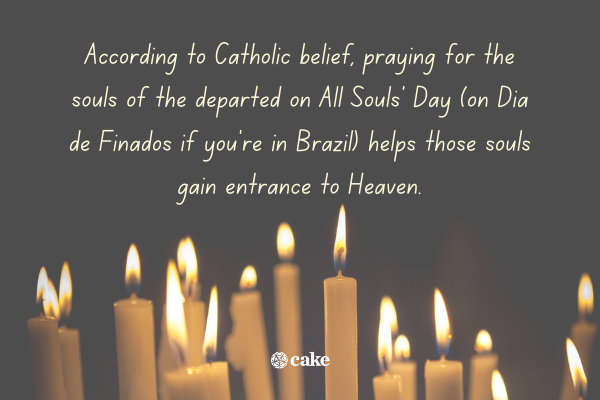 If you visit Brazil on Dia de Finados, you’re unlikely to find raucous festivals, parades, and parties. Unlike the Day of the Dead in other countries, Dia de Finados in Brazil is a time of quiet contemplation and introspection.

But there are still some traditions that go along with the Day of the Dead in Brazil. Here are some of the things Brazilians often do to commemorate Dia de Finados.

At the heart of Dia de Finados is the theme of honoring departed loved ones. One way Brazilians do that is by visiting cemeteries and decorating the graves.

It’s customary to clean up a loved one’s headstone if need be, and to place flowers on the plot. So many Brazilians decorate loved ones’ graves on Dia de Finados that flower sales see an annual uptick of 40% on the date each year.

In addition to placing flowers on the graves of loved ones, family members often bring candles to the cemetery. On Dia de Finados, you can observe the flickering light of candles across many cemeteries after the sun sets.

Some churches even hold group prayers at or near the cemetery for Dia de Finados, after which people may be encouraged to light candles.

For devout Catholics, November 2 is a religious holiday. In addition to remembering beloved family members who’ve passed away, All Souls’ Day is the opportunity to pray for their souls.

According to Catholic belief, praying for the souls of the departed on All Souls’ Day (on Dia de Finados if you’re in Brazil) helps those souls gain entrance to Heaven. So for Catholics in Brazil, it’s a day for praying at home or attending an All Souls’ Mass at the local church.

Abstaining from meat and alcohol

As a show of respect for those they’ve lost, some Brazilians give up simple pleasures. They might abstain from eating meat, drinking any alcohol, or both for the duration of November 2 or even longer.

This stands in stark contrast to the Day of the Dead celebrations found elsewhere, where feasting and toasting over alcoholic beverages are the norm.

Enjoying churrasco with friends and family

While some Brazilians abstain from meat and alcohol to honor the dead on Dia de Finados, others join together with family and friends for a BBQ. In Brazil, BBQ goes by the name churrasco. Churrasco with black beans is a classic Brazilian dish for holidays and family gatherings.

Catholics observing All Souls’ Day in Brazil often sing songs and hymns that honor the souls of the deceased. These hymns, according to Catholic belief, can help the souls of the departed purge their sins and enter Heaven in the afterlife.

Another way Catholics around the world honor the dead on All Souls’ Day is with altars. A small home altar might consist of photos of departed loved ones, candles, and religious iconography.

On All Souls’ Day, it’s also important to recite specific prayers for the dead, according to Catholic tradition. Certain prayers, like the Prayer for St. Gertrude, can purportedly release souls from purgatory and send them to Heaven.

Another way to honor the dead is by leaving food and drink offerings, either on the gravesite or on the home altar. While this is primarily part of Día de Los Muertos symbology and ritual, it’s part of Day of the Dead tradition around the world.

Since Dia de Finados takes place on November 2, you might be wondering: does Brazil celebrate Halloween? The answer is yes—kind of. Despite many attempts to bring the tradition of Halloween to Brazil, the practices of carving pumpkins, trick-or-treating, and dressing up in ghoulish costumes never truly caught on.

Instead, early autumn in Brazil is dedicated to mourning the departed and praying for their souls.  Some costume parties take place in Brazil around Halloween, though, and the holiday is becoming more popular each year. But you’re still more likely to observe the unique annual traditions of Dia de Finados.