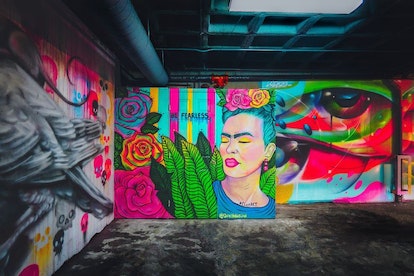 Frida Kahlo is one of the best-known Mexican painters of the past century. She’s often recognized for her striking, surrealist art. Her self-portraits grapple with some of humanity’s biggest questions like identity, body image, and even death.

Though she rose to popularity for her work during her lifetime, it was in death that she gained much of the recognition she deserved. Unfortunately, she passed away at age 47. She painted up until her death, even when she was no longer able to walk herself. A strong woman through and through, it’s no wonder her funeral is one that’s frequently asked about.

Since her life was full of much chronic pain due to various health problems, she often spoke and wrote about her own death. Her diary reads, “I hope the exit is joyful. And I hope never to come back.” With such mystery surrounding both her life and death, what happened during Frida Kahlo’s funeral? In this guide, we’ll answer this question and more.

Like the woman herself, Frida Kahlo’s funeral was both traditional and out-of-the-ordinary. She was laid for viewing in her favorite jewelry and Tehuana costume. It was artistic through and through.

During the procession, a Communist flag was famously draped over her open casket. Her husband, artist Diego Rivera, kept this flag over her for the duration of the funeral. All of these occurrences made her funeral similar to a work of performative art within itself.

Kahlo’s funeral took place at the Palace of Fine Arts in Mexico City, a place very close to the artist during her lifetime. This grand building has hosted some of the most notable events in the Mexican art world, from dance to art exhibitions.

A dramatic, neoclassical building for the grandest and most skilled of artists seems like the fitting place for such an important figure. Funerals and memorial services were only held here for some of the most well-known artists of the time. For Kahlo’s funeral to take place here was a huge honor. It’s an important part of the Palace of Fine Arts’ history to this day.

Traditional Mexican songs were sung during Kahlo’s funeral. Funeral songs are often deeply rooted in history, culture, and tradition. Kahlo’s friends and family sang her favorite Mexican songs both during the funeral and also her cremation.

The family also chose to sing her favorite hymns. Religious hymns are a form of comfort for the grieving family. Her husband, Diego Riviera, identified this as one of the most tragic days of his life. This mourning could be heard in the music of the guests and Kahlo’s closest family and friends.

Over 600 mourners attended the Mexican artist’s funeral. Like most celebrity deaths, people from all backgrounds felt affected by this loss. Though they might not have known her personally, her emotional artwork resonated with them on a deep level. It’s easy to feel connected to celebrities, and this is seen in the large turnout upon her death.

In addition to her friends and family, her art students also attended to mourn. Kahlo was a passionate art teacher, and she gave her all to her students.

A scandal erupted during the ceremony when one of her former students draped a Communist flag with the hammer and sickle over her coffin. Though the family was warned not to turn this isn’t a political statement, Kahlo’s husband refused to let anyone remove this flag throughout the entire ceremony.

Other than her students and fans of her work, famous figures also attended. Most notably, the former Mexican president Lazaro Cardenas made an appearance within the honor guard. Other famous Mexican artists flocked to her funeral to pay respects. The size and notoriety of Kahlo’s funeral show the size of her legacy.

During the procession to the crematorium at the Pantheon Civil de Dolores, mourners followed behind the hearse. It was a rainy day, casting a sorrowful shadow over the day.

It’s not widely known, but Frida Kahlo was cremated. There’s a popular story that, as she was wheeled into the flames at the crematorium, she suddenly sat upright. Her hair lit into flames, forming a glorious wreath around her head.

While this is likely nothing but superstition, it’s interesting to see how this narrative framed itself around her death. Her husband scooped her ashes into a red silk scarf, another dramatic symbol of her life. Her ashes were preserved in a pre-Columbian urn.

How and Where Was Frida Kahlo Buried?

While Frida Kahlo was cremated and not buried, her ashes are still on display today. One of the most memorable parts of celebrity funerals is seeing the body laid to rest in its grave. This is why so many people flock to well-known gravesites for famous artists and figures around the world.

Kahlo’s ashes, in their urn, are on display today at Casa Azul in Coyoacan. This “blue house” was previously Frida Hahlo’s home. Today, her home has been transformed into a museum, paying homage to her life of art and creative expression.

How Did People Grieve and Memorialize Frida Kahlo?

Today, Kahlo is remembered as one of the greatest portrait artists of her time. Her work is not only deeply connected to her Mexican culture and heritage, but it’s also deeply connected to her own grief, pain, and suffering. The emotions in her artwork stand out from the page, and this is what makes her paintings larger than life.

After her death, her students continued her legacy by dedicating artwork in her name. Her legacy is also memorialized through her work. Beyond her artwork, her letters and journals have been published as a memoir of her life. Like other artists who came before her, the best way to remember Kahlo is through her words and her creations.

The death of a great artist like Frida Kahlo strikes deep within the heart of society. Though decades passed since her death, Kahlo’s work is still taught as one of the leading surrealist artists of the past century. Though she lived a life of both pain and passion, she wasn’t afraid to be herself in both life and death.

Her funeral is a reflection of a life lived to its fullest, despite the many obstacles in her path. Kahlo’s legacy is in her paintings where her personality and spirit seem to jump out of the image. As she said, “I paint flowers so they will not die.” In that sense, Kahlo lives on through her work and the passion of artists everywhere.