Christians often opt to include hymns in funeral services for their loved ones. Funeral hymns are usually older songs steeped in tradition and religious faith.

Selecting the proper hymn can help you pay tribute to a deceased friend or family member. Consider the hymns your deceased loved one connected with and enjoyed. Doing so can bring you comfort as you lay your loved one to rest.

We’ve compiled a list of some of the most well-loved funeral hymns of all time so you can plan your loved one’s funeral.

COVID-19 tip: If you're planning a virtual or online funeral using a service like GatheringUs, you can still play hymns for online funeral guests. Talk with your funeral director or event planner and make sure you have the correct digital files or microphones in place. 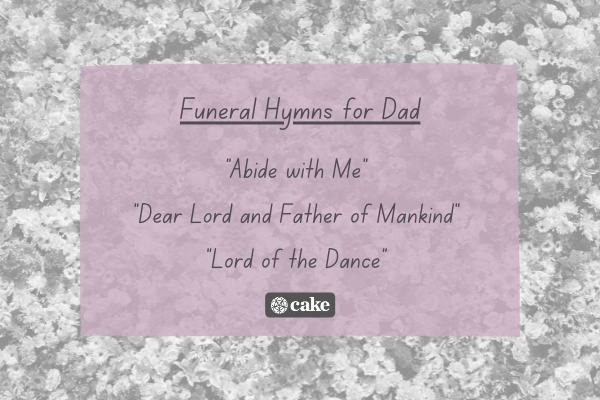 Are you faced with the heartbreaking task of burying your father? Try to pick a hymn he loved. If you don’t know his favorites, consider hymns that remind you of his values and character.

Tip: Choosing funeral hymns might be just one of the many tasks you're undertaking for the first time after the loss of a loved one. If you need help prioritizing your responsibilities or working through the details, our post-loss checklist can help.

Fathers are often cast as strong, silent protectors of a family. This hymn casts God as a father figure who can guide your own father in death as he did for you during his life.

2. "Dear Lord and Father of Mankind"

There’s a nice symmetry in selecting a hymn that specifically invokes the heavenly father.

Was your father a warm, jovial type? This joyous hymn is fitting. Writer Sydney Carter based the hymn on 18th century Shakers.

The hymn you select for your mother will come down to the message you want to convey about the person she was. These hymns cover a range of occasions.

Many of us look to our mothers as a source of unceasing love and wisdom. This hymn reminds us to look for those qualities in God.

You may draw comfort from imagining that your mother is still looking down on you. This sweet John Glynn hymn perfectly encapsulates that hope.

One common link among all Baptists is the belief that people who have faith in Jesus will join him in heaven. Baptist hymns typically reflect this message.

This hymn was written in the 1770s and is one of the world’s most iconic funeral hymns. Its uplifting message can leave mourners feeling hopeful.

This devout hymn was written by Horatio Gates Spafford after he lost all four of his daughters in a tragic shipwreck. This hymn conveys a strong and unshakeable faith.

This Baptist hymn, which dates back to the 19th century, showcases an unabashed devotion to God.

Check out our picks for the best gospel funeral songs if you're looking for more recommendations. 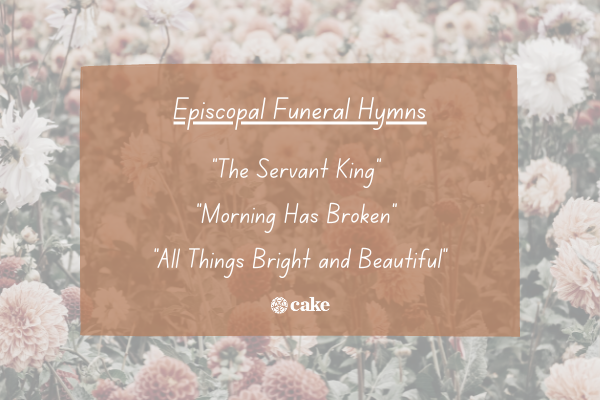 The Episcopal Church in the United States consists of millions of members from a wide variety of cultural backgrounds. Many of the hymns sung in Episcopal churches are also shared with other denominations.

This powerful hymn is versatile enough to be played at various types of religious services. It is also equally at home in many different Christian denominations.

Cat Stevens gave this hymn, originally written in 1931, an updated folk twist 40 years later. Either version is a lovely choice for an uplifting funeral song. It focuses on a new day’s dawning.

12. "All Things Bright and Beautiful"

This Victorian-era hymn gives thanks for all of God’s creations. It’s another hymn that may give mourners comfort.

Lutheran funeral services are a bit more formal than some other religious denominations. They also incorporate readings from both the Old and New Testaments.

This popular hymn celebrates God. It’s a fitting choice for someone who showered others with praise but avoided receiving praise for himself or herself.

14. "Great is Thy Faithfulness"

This hymn can be used across denominations. This hymn is especially at home at a Lutheran service because it stems from the Old Testament Book of Lamentations.

This hymn acknowledges that hard times exist and that we may have trouble weathering the storm. It’s also a great reminder that there are people you can lean on to give you strength when you are frustrated and grieving.

Mortal life is a gift from God, according to Methodist beliefs. The end of mortal life means you must embark on eternal life. The hymns played at Methodist funerals often have a positive and uplifting bent.

This hymn was one of over 6,000 hymns written by Charles Wesley, a leader of the Methodist movement in England.

This hymn was penned by teacher Francis Jane Crosby in the 1800s. It’s now a standard in the United Methodist hymnal.

This is another Victorian-era hymn. Its message is about trusting God to lead you through the darkest night into the light of a new day. 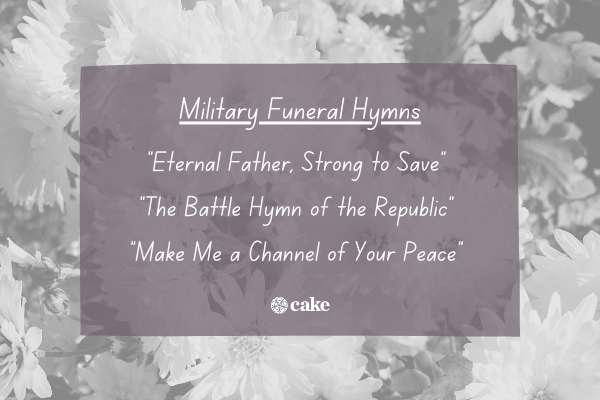 This hymn was originally associated with British seafarers but was soon adopted by the U.S. Navy. Various branches of the armed services in the U.K. and the U.S. have adopted variations of this song. It’s a safe choice for most military members.

20. "The Battle Hymn of the Republic"

This abolitionist hymn rose to prominence during the Civil War. It has been played at several high-profile funerals. It was one of Winston Churchill’s favorite hymns, and it was played at his funeral. It was more recently played at the funeral of George H.W. Bush. It’s frequently played at military funerals.

This hymn, based on the anonymous Prayer of St. Francis, was first set to music in 1967. It’s the official anthem of the Royal British Legion, so it’s appropriate to play for a deceased member of the British Armed Forces.

Many people think funerals must be completely grim and tragic. But religious people often find comfort and joy imagining their loved ones ascending to heaven. Many funeral hymns have a distinctly positive message.

This lilting hymn is set to the tune of an old Irish folk song. It’s sung at weddings as well as funerals, which demonstrates its versatility and uplifting message.

This modern hymn is an unabashedly joyful praise song. Even so, the hymn remains eminently funeral-appropriate.

This peaceful hymn encourages mourners to take comfort knowing the deceased is at peace in the arms of the Lord.

Some hymns are only decades old and others have been around for centuries. These deeply-rooted hymns connect the deceased to the history of their faith.

This Irish hymn may be the oldest tune on our list — it dates back to the 8th century. You’ll be able to find plenty of modern interpretations as well.

This hymn, inspired by Psalm 90, was penned by Isaac Watts in 1708. It reminds us that this moment in time is fleeting compared to what has happened and what is yet to come.

Augustus Toplady wrote this praise and worship hymn in 1775. His autobiographical experience, about taking shelter from a storm, became a treasured metaphor. 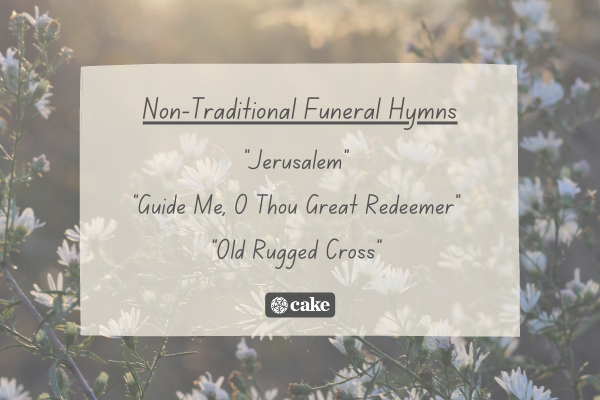 Some hymns can’t be neatly categorized, but they still deserve consideration. Here are a few funeral hymn suggestions that are slightly outside the box.

Poet William Blake rejected conventional religion and orthodox Christianity during his lifetime. He cobbled together his own version of philosophy and mythology. His poem, Jerusalem, is a widely-used funeral hymn.

This hymn is so commonly sung at rugby matches that it’s been dubbed the “Welsh Rugby Hymn.” Playing something like this could be a nod to your dad if he was a sports fan.

As you listen to religious and spiritual funeral songs, you’ll notice that they have been reinterpreted many times over the years. Sometimes playing a more modern take on a traditional funeral hymn adds some character to a funeral ceremony. Alan Jackson’s country touch on an old evangelical standard offers a different take on a potential funeral hymn.

Choose from these 30 Hymns as You Plan a Funeral

Music can be an integral part of the healing process. It helps you access and process your emotions and it serves as a connection between you and your deceased loved one. Put some thought into picking out the perfect funeral songs. We hope this guide helps you select the perfect hymn as you plan the funeral service for your loved one.