Do you ever feel like most of your best memories are tied to music? There’s a scientific explanation for that. Music creates strong emotions, and strong emotions enhance the processes that form memories. When we share a meaningful experience with music, we create significant connections.

Funerals are an opportunity for us to gather and share memories about a loved one who has passed away. Sometimes it’s difficult for us to sum up how we feel about a person in words. This is where a song can be helpful.

We can explain why a song meant so much to the deceased. Or why the song was significant to our relationship with them. If you’re planning a memorial service or virtual funeral ceremony for your dad, here are some examples of funeral songs that might resonate with you.

COVID-19 tip: If you're hosting a Zoom funeral using a service like GatheringUs, ask your online guests to send songs that remind them of your dad in the chat window. Have a tech-savvy family member compile the playlist and stream it during the digital reception.

Best Funeral Songs from a Son 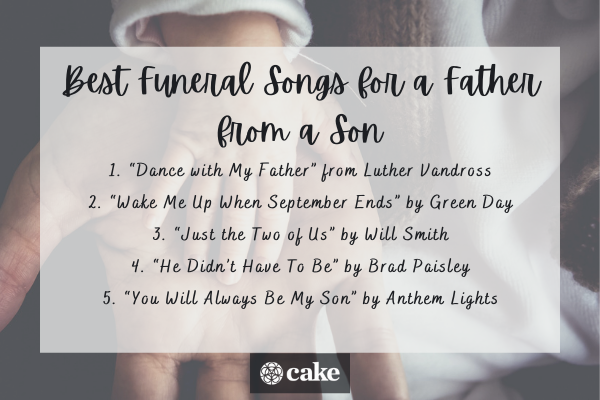 Dads and sons have a special bond. If you’re picking out funeral songs for dad, have a look at a few examples.

Tip: Creating a funeral playlist might be just a small part of your post-death responsibilities. If you need helping sorting it all out, check out our post-loss checklist.

1. “Dance with My Father” from Luther Vandross

Luther Vandross passed away two years after recording this deeply personal track about his late father, lending it extra poignancy.

2. “Wake Me Up When September Ends” by Green Day

Green Day burst onto the scene with brash and bratty pop-punk anthems. This ballad about the loss of frontman Billie Armstrong’s father is painful and poignant.

Will Smith made a name for himself with brash and humorous rap tracks. This sensitive single showed that the Fresh Prince had matured into a true king.

Stepdads often come into a young person’s life and become a father figure. This song pays tribute to those men.

5. “You Will Always Be My Son” by Anthem Lights

6. “Father and Son” by Cat Stevens

This melancholy folk tune about how hard it can be to break away on your own has been covered over a dozen times thanks to its universal message.

7. “Wind Beneath My Wings” by Gerald Levert and Eddie Levert

Most people are familiar with Bette Midler’s version of this song. This R&B version by the father-son soul duo centers on their relationship.

The country singer celebrates how much his father did for his family and expresses his hope to emulate him.

The folk singer broke form with this clear and simple tune about his hopes and dreams for his son.

This classic country song is about the unconditional and never-ending love between father and son.

Best Funeral Songs from a Daughter

A daughter who has a strong relationship with her father is more likely to grow up strong and confident. These songs honor that special relationship.

Forty years after the crooner recorded this track, his daughter used technology to perform this duet. The rendition shows that love lingers even after death.

This hauntingly beautiful piano ballad depicts a father-daughter relationship throughout the years. It captures the messages of childhood.

While this soul hit is technically a love song, it’s become a treasured tune for fathers and daughters over the last 55 years.

14. “Your Joy” from Chrisette Michele

This artist’s aching voice is so well-served by the outstanding production, it takes the lilting melody and makes it soar.

Legend dedicated this jazzy tune to his daughter. He assures her with the comforting message that he will always be there no matter what.

16. “Daddy Lessons” by Beyonce and The Dixie Chicks

Old-school country and gospel combine in this unexpected collaboration. The result delivers a message that dads help their daughters grow into strong women.

17. “Cecilia and the Satellite” by Andrew McMahon in the Wilderness

McMahon, a seasoned lyricist, crafted this uplifting, uptempo pop gem for his daughter.

18. “Father and Daughter” from Paul Simon

Sometimes, good things come from strange places. This mellow, mid-tempo tune features harmonies from one of Simon’s children. He wrote it for the soundtrack to “The Wild Thornberrys Movie”.

19. “You Can Let Go Now Daddy” from Crystal Shawanda

This moving ballad concerns when parents and children need to let each other go. In life as well as death.

This ballad isn’t explicitly about father-daughter relationships. But the soaring vocals and emotional lyrics make it a perfect fit for the occasion. 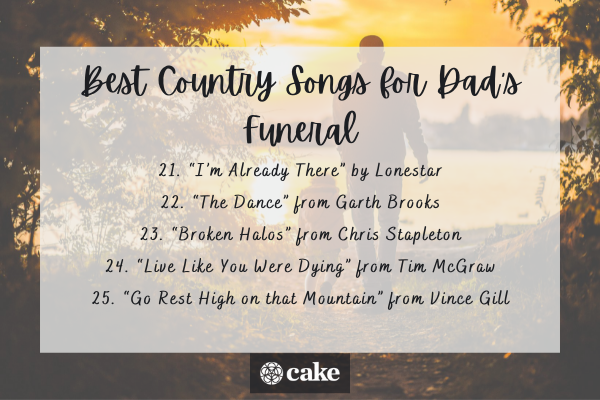 More so than almost any other genre, country music is all about raw, unvarnished emotion. There is an unparalleled catharsis you can experience listening to country music.

This powerful ballad is about a dad telling his kids that even when he’s gone, he’s with them in spirit. It's even more meaningful in the context of a funeral.

This iconic country tune is all about how the joy of loving someone is well-worth the pain of losing them.

In this poignant track, the artist celebrates the angels on Earth who help us through difficult times. He reminds us that there’s a bigger plan to which we’re not meant to know the answers.

This song urges you to do the things you’ve always wanted to but held back from doing. Mourners listening may feel implored as a way to honor those who can no longer do the same.

25. “Go Rest High on that Mountain” from Vince Gill

Vince Gill wrote this song about the untimely deaths of his friend and brother. It has since resonated with country fans and become a staple at funerals.

On the surface, rock music as a genre might not seem like the place to find the best songs about death for a funeral. But rock music can be just as expressive and emotional as any other genre.

26. “Tears in Heaven” from Eric Clapton

Clapton composed this soft rock ballad to process the grief of losing his young son. It is mournful and understated.

27. “Wish You Were Here” from Pink Floyd

While this is part of a longer concept album, this spacey experimental rock song stands on its own.

Bob Dylan wrote this song for a film in '73. This undeniable rock cover is more widely known.

29. “Good Riddance (Time of Your Life)” from Green Day

Despite the title, this punk rock ballad about a bittersweet parting of ways is well-suited for a funeral.

30. “Spirit in the Sky” from Norman Greenbaum

This is a rollicking, joyful tune about a man looking forward to meeting the spirit in the sky when he dies. It's one of the most requested songs at funeral homes. 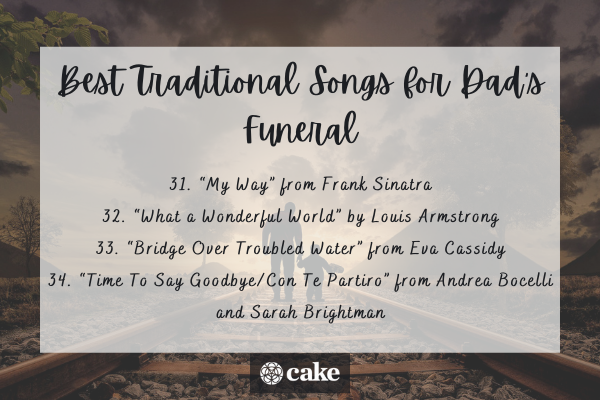 Some songs become classics because a wide cross-section of people can relate. These traditional tunes resonate with so many for good reason.

This song's popularity at funerals is well-deserved. The thought that a loved one lived their life on their own terms—unapologetically and with few regrets—is quite uplifting.

32. “What a Wonderful World” by Louis Armstrong

If you prefer your funeral songs to be hopeful, you can’t beat this jazz standard. It was written to carry a message of hope even in difficult times.

This is a classic gospel-tinged Simon and Garfunkel tune covered by the incomparable Cassidy. Her deft and soothing vocals give it a joyous lift.

The gorgeous, soaring vocals on this classic make it a funeral favorite in any language.

35. “Fire and Rain” from James Taylor

This folk anthem is aching and melancholy. Singer-songwriter Taylor endured a series of tragedies that inspired the song.

Countless artists have covered this Leonard Cohen song, including Jeff Buckley. The lush and layered arrangement by this a capella group is especially affecting.

The uplifting lyrics in this modern classic are a perfect tribute to a father who supported his children in their endeavors.

38. “Somewhere Over the Rainbow/What a Wonderful World Medley” from Israel Kamakawiwo’Ole

The native Hawaiian musician laid down this mashup in just one take. The lilting melody and gentle ukulele make this medley an enduring classic.

This lovely, lyrical tune encourages mourners to smile through their heartbreak. The act of putting on a smile can give you the strength you need to move on through sad times.

Most of us know the British songstress for penning her lyrics. In this rare cover, she spins a Bob Dylan classic into a haunting ballad that transcends time and genres.

Picking the Best for Your Dad

No two fathers are the same. Whoever your father was or what kind of relationship you had, there's a song to capture it. Hopefully, these funeral songs inspire you to find one.