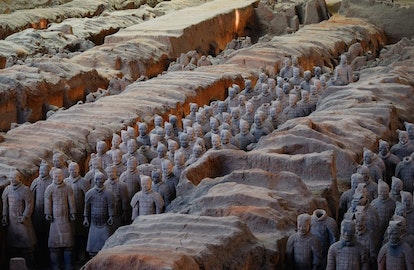 Why do we bury the dead? Why have we done so for millennia? The truth is, there’s no universal answer. Reasons for burying the dead vary based on a culture’s beliefs and values about death.

Luckily, there are many ways we can learn about those beliefs and values, even when they are centuries old and the cultures that practiced them have lied long dormant. One way is to study funerary art. Funerary art has provided us with valuable insights into perspectives on death from across the world and throughout history.

What is funerary art? Why is it important? This guide will clarify the topic to help you more thoroughly appreciate the role funerary art has played (and continues to play) for various peoples.

What is Funerary Art?

In general, funerary art consists of items buried alongside a body laid to rest. They are often the work of artisans. That said, funerary art is a fairly broad term that encompasses a wide range of artistic creations from cultures throughout the world and across time. That means funerary art has also served many different purposes in various periods and places.

In the case of a mausoleum burial, in which those putting someone to rest inter their body above the ground, they might place these items near the body. Funerary art can also consist of decorations on or around a tomb.

Sometimes funerary art is present at in-ground burials. For instance, a statue or figure that “stands watch” over someone’s burial site could technically qualify as an example of funerary art. Thus, examples of funerary art often include grave decorations.

» MORE: What are the practical steps to take after a loss? We've got you covered with this checklist.

It would be impossible to cover the entire history of funerary art in a single blog post. Historians and archaeologists have discovered examples of funerary art dating back to the very early days of civilization. We can’t know for certain exactly when or where the custom of burying items with the dead or placing them near their tombs began.

Some scholars consider any tomb to qualify as funerary art if it’s clear those who constructed it didn’t merely consider practical needs when designing it. In other words, if they made certain design choices for reasons beyond simply holding someone’s body, the tomb they made could technically be an example of funerary art.

For instance, evidence indicates the Carnac stones in Brittany, France, marked burial spots (or, at least, that was one of their purposes). Dating back to the Neolithic period, these would potentially be among the earliest examples of funerary art.

Funerary art became particularly important to the ancient Egyptians during the First Dynasty. This is when the practice of erecting pyramids for the pharaohs began.

It’s also a time many historians believe marked an early instance of society specifically creating funerary art according to established processes and guidelines. The following section of this blog will cover additional famous examples of funerary art from around the world.

The ancient Greeks started developing funerary art not long after the Egyptians. It’s worth touching on this point in the timeline of funerary art because it highlights how funerary art can represent a culture’s overall beliefs and values regarding death.

Specifically, the ancient Greeks believed that practicing certain rituals after a person died would help them travel from this world to the afterlife. Some examples of ancient Greek funerary art consist of vases decorated with imagery depicting the various steps in the traditional funeral process, which helped scholars learn how the Greeks facilitated this journey.

Famous Funerary Art from Around the World

The ancient Egyptian pyramids represent some of the most famous examples of funerary art from around the world. However, they’re by no means the only examples.

These are few more noteworthy funerary art discoveries. Keep in mind, if you’re interested in this subject, you can often see these examples in person at museums and historic sites!

Emperor Shah Jahan commissioned its construction in 1632 to serve as a mausoleum for his wife Mumtaz Mahal. Those responsible for building the Taj Mahal didn’t complete it until 1648 and added improvements in 1653.

This serves as a reminder that funerary art can play a very important role in a culture. When a society’s leader has the power and resources to commission a work of funerary art that takes more than a decade to complete, history indicates it’s not uncommon for them to do so. The story of the Taj Mahal’s construction is merely one of the more well-known examples.

There may still be various examples of early funerary art that we’ve yet to discover. After all, even though China’s Terracotta Army dates back to 210 or 209 BCE, we didn’t know about its existence until 1974, when farmers in China’s Lintong County discovered it.

The Terracotta Army marks the burial/internment spot of Qin Shi Huang, whom historians have dubbed the First Emperor of China. It’s actually a collection of sculptures that originally included 8,000 soldiers, 520 horses, and greater than 130 chariots. Other sculptures also depict such figures as musicians and acrobats. Because those who put the emperor to rest buried many of the sculptures, they remained undiscovered until just a few decades ago.

Scholars generally assume the Terracotta Army was meant to protect and entertain the emperor in the afterlife. This reveals how funerary art can help us more thoroughly understand how specific cultures interpreted death.

The British Museum, which now serves as home to many of the artifacts from Sutton Hoo, calls this example of funerary art “one of the greatest archaeological discoveries of all time.” That may very well be an entirely fair boast. Like the Terracotta Army, we also didn’t discover it until recently.

Sutton Hoo is actually the name of an estate off the UK’s Suffolk coast that Edith Pretty and her son lived on in 1937. It was during this year that Pretty started to consult with archaeologists and related specialists. She’d noticed a series of baffling mounds on her property. Some guests claimed to see ghosts near them. Others told Pretty the mounds were home to buried treasure.

They were more right than they could have imagined. With the help of Basil Brown, a neighbor and amateur archaeologist, Pretty excavated the mounds. She and Brown discovered they were home to a large early Anglo-Saxon rowing boat.

What was a boat doing that far inland? As it turns out, it included a burial chamber, indicating it was used for a ship burial. Its ornate design, along with the items inside it, has led many scholars to determine it qualifies as a major example of funerary art.

The Tombs of Goguryeo

There are many different reasons we bury the dead. Burying the dead in specific ways can preserve a person’s legacy, ensuring future generations know about their life. Many cultures throughout the world have prioritized these types of funerary practices when burying important figures in their societies.

For example, in North Korea, the Tombs of Goguryeo served as the resting spots for many leaders from the Three Kingdoms Period of Korean history. Many of the tombs feature murals painted directly into their stone walls. These murals often depict the lives of those interred in the tombs.

They also commonly feature scenes of daily life from the time and region. For instance, many of the murals at the Tombs of Goguryeo feature hunting scenes. Thus, some historians refer to them when studying early Koren hunting practices.

The practice of creating funerary art continues throughout the world to this day. For example, many people select beautiful urns to hold loved ones’ remains. You can also see examples of funerary art at cemeteries, where statues accompany burial sites or mausoleums.

You may want to consider storing a loved one’s urn in a columbarium if you wish to include funerary art with their urn. A columbarium is essentially a niche or indent in a wall where you can place an urn, along with other items that may fit alongside it. Some families place various types of funerary art (such as photos or paintings of their deceased loved ones) in these spots as well.

It’s crucial to remember that funerary art has a very long history. This brief guide is merely an introduction to a fascinating subject. That said, it hopefully provided you with some key insights into what funerary art is, and why it’s long played an important role in human life.