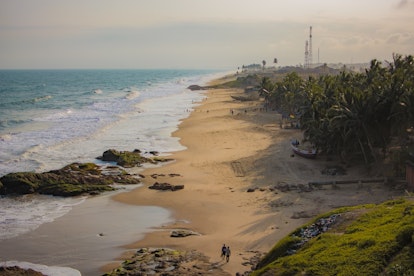 Funerals are a big deal in Ghana. The people of this West-African nation revere the dead, and funerals play a central role within their communities.

Traditional Ghanian funerals are lavish, elaborate, and often drawn-out affairs. In fact, it’s common for families to spend more on funerals than weddings.

If you’ve ever wondered what it would be like to attend a Ghanaian funeral,  you’ll find the answers to your questions below.

How Ghanaians View Life, Death, and the Afterlife

The modern-day nation of Ghana includes several diverse tribes. Each of these cultures, though, holds village ancestors and the dead in high esteem.

Funerals are an essential part of paying respect to the departed in Ghana, and each funeral can take weeks or months to plan and complete. It’s not unusual for the selection of “chief mourner” to last several weeks—let alone arranging a celebration which the family deems acceptable.

Only 5.2 percent of Ghanaians identify indigenous African religions as their primary spirituality. However, traditional African religious practices play a role in nearly all funeral ceremonies in Ghana.

» MORE: Turn your pet or loved one's ashes into beautiful cremation stones you can share with the family.

As mentioned above, several cultural identities cohabitate within the modern country of Ghana. These include Ashanti, Mole-Dagbon, and Fante. The tribes of Ghana differ in many ways, but they also practice similar funeral rites.

For example, in most Ghanaian cultures, a funeral holds great importance in the community. Services take place nearly every week. When there’s a death, Ghanaians tend to announce the passing formally with a written letter or email bulletin.

Funeral services usually take place in several stages over the course of a week or more. The main festivities take place in the morning on a Saturday, after the burial, and they can last all day.

But each culture also emphasizes different aspects of the funeral ceremony and conducts death rites in their own ways.

Tip: If you're planning a virtual Ghanaian funeral using a service like GatheringUs, you can still partake in the traditions below. Discuss adaptions with your funeral director or event planner a few days before the ceremony.

The Ashanti tribe is the largest in Ghana. It makes up about half of the country’s population.

In Ashanti culture, an individual's death and funeral are significant for the whole community. A person’s family plays a hands-on role in preparing the body, both before and after death.

The main funeral festivities begin after burial. Family, friends, and acquaintances all attend to commemorate the passing of the person’s soul to Okra, the ancestral world.

Once in Okra, the soul becomes a protective spirit, and it is therefore highly venerated.  It’s not uncommon for hundreds of attendees to join in the festivities.

At the celebration, Ashanti chiefs sit in the shade of colorful umbrellas to observe. The family members of the deceased wear red and black, and men wear large black cloths across their shoulders. Traditional greetings take place upon arrival, after which dancing begins.

The people of Mole-Dagbon reside in six West African countries, including modern-day Ghana. The Dagomba are the second-largest tribe in Ghana.

Chieftaincy and familial connections play paramount roles in Dagomba society. Therefore, Dagomba funerals differ based on a person’s place within the family and their position in the tribe’s hierarchy.

Dagomba culture is heavily associated with the religion of Islam, so you may notice Islamic themes at a Dagomba funeral. But the tribe’s connection to traditional African spirituality is also very present.

Dagomba culture maintains an active link to the afterlife through its ancestors. Dagomba tradition believes the ancestors are always nearby, observing every action and thought of the living. At a funeral, the Dagomba people will likely assume that the deceased is watching the festivities.

The Fante tribe lives mainly along the coast of Ghana. They are part of the Akan people, alongside the Ashanti tribes.

The most notable differences between Fante funeral culture and Western funerals stem from the fact that the Fante people practice matrilineal tradition.

In Fante tribal culture, a person’s family lineage or abusua is his or her mother’s side of the family. Only members of one’s maternal abusua are considered immediate family.

The Fante people don’t regard marriage as a permanent familial link. Instead, they think of it as a temporary arrangement. A man often feels stronger ties to his sister’s children than to his own. A person’s spouse and children have very little involvement in the funeral, compared to the maternal family.

Additionally, the size of a Fante tribe member’s funeral is directly tied to the level of respect he or she holds in the community. A family that wants to show its love for the departed is expected to hold a long and lavish funeral.

In many cases, theatrical shows with amplifiers blasting music take precedence over traditional drums, in an attempt to host an even more impressive ceremony.

Ghanaian funerals in the United States

As in Ghana itself, American-Ghanaian funeral services begin with an announcement of the death to relatives and friends. Ghanaians in America hold their funerals on Saturday, following the African tradition.

But whereas funerals in Ghana may take place in several stages over a week or more, American-Ghanaians hold all of the steps in one day. This is because modern Ghanaians in the United States typically have work during the week.

Other alterations are also made to adjust to American life. For example, Ghanaians in the United States may hold funerals in the evening, rather than in the morning, as is traditional in Ghana.

As mentioned above, traditional music plays an essential role in many West African cultures, including the tribes of Ghana.

Talking drums not only provide musical entertainment and expression; they also tell stories with actual “words.” Drummed rhythms can tell ancient stories about death and the journey to the afterlife.

Religious beliefs across Ghana tend towards Christianity and Islam, in addition to the traditional views of Western Africa. Therefore, it’s not uncommon for attendees to join in singing gospel hymns and other religious songs.

For a Ghanaian funeral, it’s traditional for members of the community to wear formal clothing in black and white. The black-and-white dress code symbolizes giving thanks to God and an end to the initial mourning period.

In some Ghanaian cultures, including Ashanti, you’ll be able to recognize the immediate family of the deceased. This is because they alone wear red and black attire. Chieftains wear traditional garb and sit under elaborate umbrellas to observe the festivities.

The sons of the deceased sometimes wear net caps adorned with miniature ladders, as well as red peppers and eggshells. These items symbolize the seriousness of the occasion (red pepper) and the wearers’ feelings of grief and helplessness (eggshells).

As mentioned, Ghanaian funerals traditionally take place on Saturdays. In many villages, there are multiple funerals held each week on the same Saturday.

But Ghanaians observe several other days of mourning, which take place on death anniversaries. The primary of these days is one week after the person’s death.

For at least one week following a death, the family will store and prepare the body for burial. With the modern advent of refrigeration, bodies are often stored for much longer — up to several months. The longer a body is stored, the more lavish the funeral will likely be.

When a week has passed, the family will observe the day and celebrate the life of the deceased. But the one-week celebration is not as elaborate as the funeral, which takes place weeks or even months later.

One of the most notable Ghanaian funeral rites is the creation of fantasy caskets. Professional casket-makers carve and paint elaborate coffins shaped like items that the deceased loved in life.

For example, a fisherman might have a colorful casket carved and painted to look like a man-sized sea creature. In one instance, a cobbler was laid to rest in a coffin made to look like a men’s dress shoe.

Both in Ghana and in other countries, attendees to Ghanaian funerals should adhere to traditional dress codes.

In most instances, friends and extended family will be expected to wear black and white. If they want to dress traditionally, women can wear kaba.

“Kaba” refers to an outer garment that covers the blouse from the base of the neck to the waist. A modern kaba may resemble a blazer or fitted jacket, often in a peplum style.

What to bring to the funeral

A Ghanaian funeral almost always begins with a formal death announcement, which may include a request for donations. If you’re unsure, ask the family whether they would accept flowers, money, or other gifts as a show of your sympathy.

The mood of a Ghanaian funeral will be both somber and joyful by turns. You should feel free to offer your condolences, but keep in mind the religious and spiritual beliefs of the family. They may practice Christianity, Islam, an indigenous religion, or something else.

When you offer words of sympathy, make sure they’re in alignment with what the family might want to hear.

Ghanaian Burials and Mourning the Dead

In most Western cultures, families and communities hold a single day of mourning for loved ones who’ve passed. In Ghanaian culture, this isn’t the case.

Ghanaian tradition puts ancestors in a place of reverence within the community, and many Ghanaian families remember their dead several days a year. As mentioned above, this often starts with the one-week celebration.

A week after a loved one dies, the family will gather for a moment of remembrance. Similar occasions take place on other anniversaries, such as the one-year anniversary of a death.

If you’re planning to attend a Ghanaian funeral, the information provided above is an excellent place to start.

However, there’s always more to learn about Ghanaian funerals and how they differ from tribe to tribe. If you’re in doubt about what to expect from a Ghanaian funeral, your best bet is to ask the family directly.

Want to read more about funeral customs in Ghana? Read our guide on Ghana's dancing pallbearers.