If you do believe that, then you may want to find the right words to say to someone as they transition from life to death.

You can actually send someone off on that journey with a single word: “godspeed.” Here, we’ll explore the history, meaning, and cultural significance of the word godspeed. 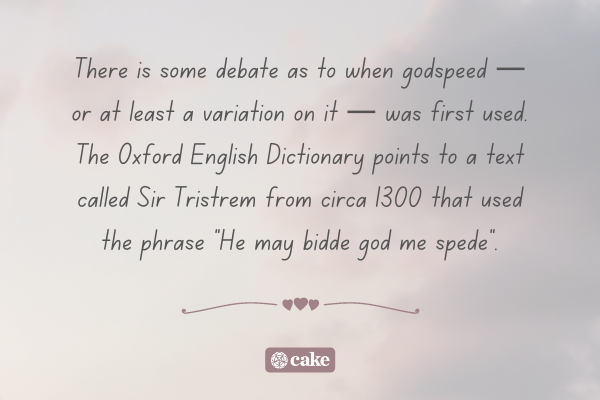 According to the Merriam-Webster Dictionary, godspeed is a noun meaning “a prosperous journey.” Synonyms for godspeed include: adieu, au revoir, bon voyage, farewell, and goodbye.

You might assume that the -speed suffix of godspeed has to do with quickness, but that is not the case.

The word originated from the Middle English phrase “God spede.” The “God” part of that phrase refers to deity. The “spede” part is the singular subjunctive form of the word “speden” which means “to prosper.” “Speden” is very similar to the Old English word “spēd”, which means “success.”

There is some debate as to when godspeed — or at least a variation on it — was first used. The Oxford English Dictionary points to a text called Sir Tristrem from circa 1300 that used the phrase “He may bidde god me spede”.

Another early usage was in “The Knight’s Tale,” which was the first story in Chaucer’s The Canterbury Tales. This work from 1385 contained the line “God spede yow go forth and ley on faste.”

However, most scholars agree that it wasn’t until the 1500s that the phrase began being used in the manner of its current meaning.

The Oxford English Dictionary highlights this usage from the Tyndale Bible of 1526 as the first usage: “Yf ther come eny vnto you and bringe not this learninge him receave not to housse: neither bid him God spede.” Shakespeare also used the phrase in 1597’s Richard II: “A brace of draimen bid, God speed him wel.”

Is It OK to Say ‘Godspeed’ After Someone Dies?

Opinions vary on whether or not it's appropriate to use the word "godspeed" after someone's death. The general consensus is that it is acceptable, depending on whom you are addressing in the sentiment.

After a person dies, their next of kin will sometimes hold a funeral viewing where the deceased's body is present. Typically, the deceased's body will be visible in an open casket after being embalmed. However, visitations can also take place after a cremation. In that case, the urn holding their cremains would typically be on display.

At a funeral viewing, friends and family members can approach the casket or urn to see the deceased one last time. Mourners often take this moment to wish their loved ones farewell. "Godspeed" is an appropriate sentiment when addressed to the deceased.

At funeral viewings and memorial services, you'll also have the opportunity to express your condolences to the deceased's closest family members. It would not be appropriate to say "godspeed" to them.

The expression "godspeed" is commonly used when someone embarks on a new journey or adventure and is often synonymous with wishing someone good fortune. A recently bereaved person might find the sentiment puzzling or even hurtful. However, wishing "godspeed" to the deceased is wishing them well on whatever journey awaits them after death.

There is a caveat to this rule. If the deceased had a troubled relationship with religion, you should skip using this expression altogether. Even if the deceased can't hear you, respecting their beliefs is always important.

How Else Is Godspeed Used?

There are many times in life when it is appropriate to wish someone godspeed. Again, since the word has some religious connotations, some people will not be receptive to it. But if you know the person you’re talking to has faith in God, then there are several occasions where this phrase will be beneficial. Here are some examples:

When someone goes on a trip

By definition, the word "godspeed" is used to wish people well as they embark on either a literal or metaphysical journey. It doesn't get much more literal than going on a trip. The solemnity of the phrase would be a little much for someone going on a weekend beach getaway. But for longer or more arduous journeys, it's more appropriate. Some examples of this may include someone going backpacking through Europe for several months or taking a cruise around the world.

Wishing someone "godspeed" is especially fitting for someone going on a more altruistic journey. This might include joining the Peace Corps to work overseas for a few years or doing relief work after a natural disaster.

When someone is embarking on a new venture

We all experience transitional periods in our lives. As one era ends and another begins, you may want to wish someone “godspeed.” Occasions like this may include:

Essentially, any time someone in your life is starting any kind of journey, whether literal or metaphorical, you can wish them “Godspeed.” 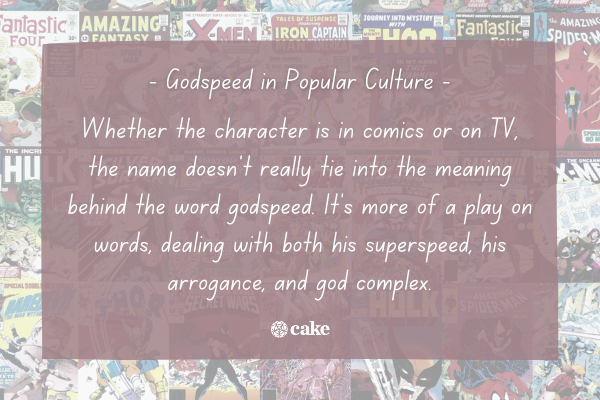 The word godspeed crops up in various places in pop culture. You can find godspeed in everything from comic books to music. Here are some of the places where you may have encountered the word godspeed:

DC Comics featured a character named August Heart. He acquired superpowers and became known as Godspeed. He appeared in The Flash series.

August Heart was a police detective who was best friends with Barry Allen (the alter ego of The Flash). His powers developed after the murder of his brother.

While The Flash used his own superspeed to apprehend criminals, Godspeed was a vigilante. He used his superspeed to kill criminals. Depending on which comic universe he appears in, he is the villain or a more conflicted antihero.

The Flash comics have inspired a television show on The CW network. The eighteenth episode of the fifth season was titled “Godspeed” and featured the villain as a one-off character. His backstory was changed for the show.

Instead of a police detective and a contemporary of The Flash, he was a science intern in the year 2049. Instead of pursuing criminals, he himself is a criminal stealing chemicals from labs to enhance his superspeed.

Whether the character is in comics or on TV, the name doesn’t really tie into the meaning behind the word godspeed. It’s more of a play on words, dealing with both his superspeed, his arrogance, and god complex.

In 2016, a Taiwanese film called Godspeed was released. This dark comedy follows a taxi driver who unwittingly picks up a drug trafficker.

On their journey together they get caught up in extortion, murder, and a gang rivalry. Along the way, they form an unconventional friendship. The title is apt considering both their physical and emotional journey.

God Speed is the title of a painting by British artist Edmund Leighton, which was exhibited in the Royal Academy of Arts in 1900. It portrayed an armored knight preparing to depart for war.

It was the first painting by Leighton in a series of works about chivalry. As the woman is sending her beloved on a dangerous journey, the title is perfectly used.

There are a few different pieces of literature that include a variation of godspeed.

“God Spede the Plough” is the title of a manuscript poem from the early 16th century. It’s a satirical work criticizing the greed of the clergy. It borrows twelve stanzas from A Monk’s Tale by Geoffrey Chaucer. The title is very true to the original use of “god spede” as a phrase.

Godspeed is the title of a 1993 novel by Charles Sheffield. Sheffield is a prolific science-fiction writer, and this book is a definite example of his work in the genre.

In this book, a young man from an isolated planet dreams of traveling through space. He teams up with space pirates in search of the legendary Godspeed drive, which is said to allow people to travel faster than the speed of light.

Again, this title is apt because of the journey the protagonist embarks upon as well as its coming-of-age motif.

Godspeed is also the name of an announced novel by Will Christopher Baer. Baer, who writes hardboiled neo-noir fiction, has a devoted contingent of fans.

Several years ago, he announced an upcoming novel named Godspeed, but it has never materialized. His fans are still clamoring for it across the internet. Should it ever materialize, it will have gone on quite a journey of its own.

There are a few different bands with the word “godspeed” in their name. They’ve all had some fairly interesting journeys of their own. Here are some of them:

A few artists have used variations of “godspeed” as album titles. Interestingly, they were all released pretty close together chronologically. They are:

There are also several songs that include the word “Godspeed” in the title. They include:

3 Other Ways to Say ‘Godspeed’ When Someone is Dying 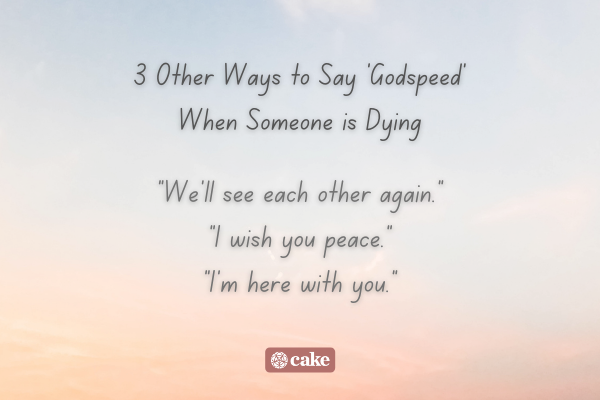 When a friend or loved one is dying, there are ways you can wish them “godspeed” on their journey in other words. Some alternative words and phrases to “godspeed” include:

1. We’ll see each other again.

Even though you’re leaving us, we’ll see each other again in heaven.

I know you’re in pain right now, and I wish you peace.

I can’t go with you, but until you’re ready to go I’m here with you.

The Meaning of Godspeed

Whether your friend or loved one is embarking on a physical journey or a metaphorical one, you can always wish them “godspeed.” This unusual phrase is a great way to wish people good luck in all things to come.

Coping with grief Death and dying