If you have lived for any length of time on this great blue marble, you’ve had to say “goodbye” to someone important to you. You’ve had a childhood friend move away, or you’ve lost a grandparent. You had to say goodbye to neighbors when you moved or a boyfriend when you broke up with him.

Here are some quotes about saying “goodbye.” Some of them are from goodbye songs, and some are from poems. You may want to post them on social media, or you may want to include them on a farewell card.

Regardless of how you use the quotes, reading them should also be a reminder that you aren’t the only person who has had to say “goodbye” to someone you love. It’s a painful part of the human experience. 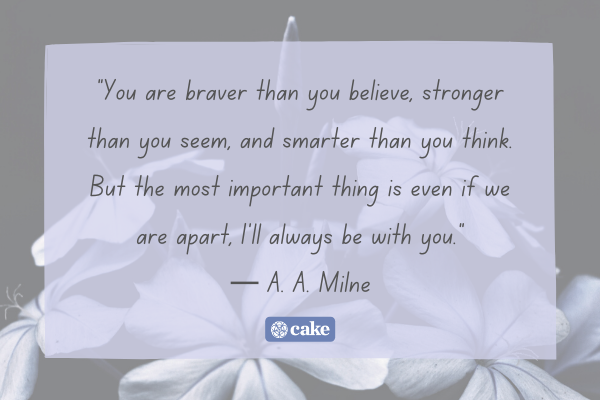 There are a lot of quotes about saying “goodbye.” While many of them are poignant, full of sorrow and grief, others will remind you that not all goodbyes are sad. We’ve included quotes with various attitudes to help you find the right saying for your situation.

1. “The story of life is quicker than the blink of an eye. The story of love is hello, goodbye.” —Jimi Hendrix

This is a line for Jimi Hendrix’s song called “The Story of Life.” When you attribute the quote, you may want to list Allen Toussaint as the writer. Toussaint wrote for some of the most famous musicians in the world.

2. “You are braver than you believe, stronger than you seem, and smarter than you think. But the most important thing is even if we are apart, I’ll always be with you.” —A. A. Milne

Of course, many people attribute this quote to a stuffed bear named Pooh. A. A. Milne wrote “The House at Pooh Corner” as well as screenplays, poetry, and novels.

3. “The two hardest things to say in life are hello for the first time and goodbye for the last.” —Moira Rogers

Moira Rogers is a paranormal romance writer. Rogers is right on both accounts. It is hard to say both “hello” and “goodbye.”

4. “Don’t cry because it’s over, smile because it happened.” —Dr. Seuss

Dr. Seuss has a way of making complicated subjects so perfectly simple.

Kiera Cass is an author of young adult novels. Even though these words aren’t flowery and poetic, the statement is beautiful in its simplicity.

Quotes About Saying Goodbye to a Dying Loved One

Quite possibly one of the hardest things that you will ever have to do is to say goodbye to a loved one who is dying. Nothing can prepare you to visit the deathbed of someone you love.

6. “There are no goodbyes for us. Wherever you are, you will always be in my heart.” —Mahatma Gandhi

You never “get over” losing someone you love, but your grief may change over time. This quote by Mahatma Gandhi reminds us that our loved ones live on in our hearts until the end of our lives.

7. “Man’s feelings are always purest and most glowing in the hour of meeting and of farewell.” —Jean Paul Richter

Jean Paul Richter is a German writer who understood the complexity of the human heart.

If you believe in the afterlife, you can take comfort in knowing that you will once again see your loved one. Vera Lynn was a British singer and actress who was extremely popular during WWII.

9. “So long as the memory of certain beloved friends lives in my heart, I shall say that life is good.” —Helen Keller

Helen Keller’s teacher and lifelong friend Anne Sullivan is interred with Keller at the National Cathedral in Washington, D.C.

10. “Painful though parting be, I bow to you as I see you off to distant clouds.” —Emperor Saga

Emperor Saga was a leader of Japan who died in 842 A.D.

Quotes for Saying Goodbye to Coworkers 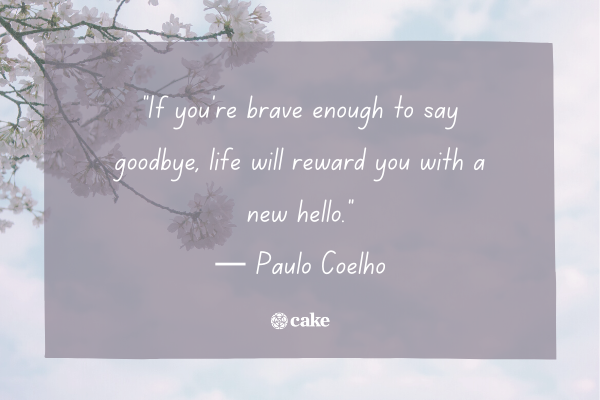 We have all had those awkward moments. It’s your coworker’s last day at work, and you make empty promises to each other about how you will meet for lunch or see each other over the holidays.

Here are some quotes to write on the card that gets passed around the office.

11. “Every new beginning comes from some other beginning’s end.” —Semisonic

Even if you are saying goodbye to someone, you may want to put a positive spin on the farewell message. Knowing that an ending comes with a new, hopeful beginning is one way to remain positive.

12. “If you’re brave enough to say goodbye, life will reward you with a new hello.” —Paulo Coelho

Paulo Coelho wrote “The Alchemist.” Coelho understands that walking away from a job (or a relationship) may be scary.

13. “See You Later, Alligator.” —Bill Haley and the Comets

Perhaps you know that you will continue to see your coworker even after he or she leaves the workplace. Consider saying (or playing) the words to this famous song from the 1950s and 60s.

14. “No distance of place or lapse of time can lessen the friendship of those who are thoroughly persuaded of each other’s worth.” —Robert Southey

If you are looking for a flowery quote to share with a friend who is leaving a job, this is it. Use these words if you have formed a close friendship with the coworker who is leaving.

15. “Thank you for everything that you’ve accomplished so far, and good luck to everything you will in the future.” —Unknown

We don’t know who penned this quote, but it is the perfect thing to say to a friend who is leaving your workplace. Everyone likes to feel appreciated.

Maybe you aren’t in the mood to read hopeful, positive-minded quotes about saying goodbye. Perhaps you are hurting, and no one can say anything to change that. Here are some sad goodbye quotes that will allow you to wallow in your misery. Some of these are quotes about the death of a friend while others are about the end of a romantic relationship.

16. “I’ve learned that goodbyes will always hurt, pictures will never replace having been there, memories good and bad will bring tears, and words can never replace feelings.” —Unknown

Yes, goodbyes will always hurt, especially if they coincide with a breakup or death.

If you have lost someone, you probably have regrets. You may feel bad for not giving your all to the relationship or spending enough quality time with the person who is now gone.

18.” To die and part is a less evil; but to part and live, there, there is the torment.” —George Lansdowne

George Lansdowne is a poet who understands the heartbreak and sorrow that follows saying goodbye at the end of a relationship.

19. “We started with a simple hello but ended with a complicated goodbye.” —Unknown

Are you experiencing a complicated “goodbye?” This quote says it all.

Charles M. Schulz was the creator of the Peanuts comic strip. Schulz gave these words to his lovable character, Charlie Brown. Charlie Brown wasn’t always a blockhead. Sometimes he had rather poignant things to say. 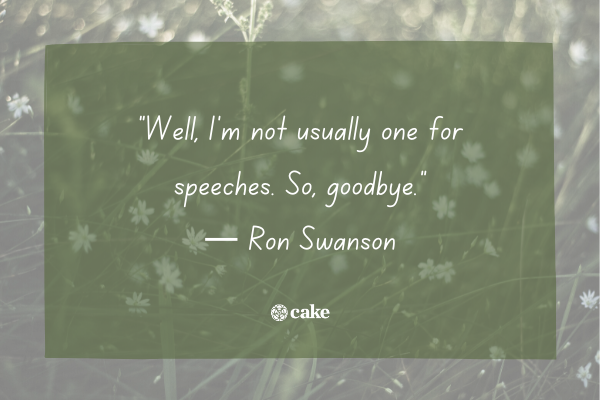 Do you use humor to help you express complicated emotions? Here are a few somewhat funny quotes about saying “farewell.”

Sorry. We know this song from the Sound of Music will be stuck in your head for the rest of your day, but it is the perfect song for the situation.

22. “It won’t be the same without you here. Work may actually get done!” —Unknown

Your coworker may be uncomfortable if you say goodbye in a heartfelt way. If you are known for your wit and sarcasm, don’t disappoint your audience.

23 “It will not be the same without you. It will actually be better!” —Unknown

We also like this example of a sarcastic statement to share with someone who is leaving. Of course, you need to know your audience before making such statements, or you may risk offending the individual.

While we are on the subject of knowing your audience . . . Make sure you have the right one before saying something like this.

There are times when sarcastic statements are not appropriate. An example of this is if you are saying a sad goodbye to someone with which you had a romantic relationship. Here are some examples of what you might say instead:

26. “A sad thing in life is that sometimes you meet someone who means a lot to you only to find out in the end that it was never bound to be and you just have to let go.” —Dave Matthews Band

We aren’t sure who wrote these lyrics, but they show that the end of a romantic relationship is not always accompanied by anger.

27. “Two words. Three vowels. Four consonants. Seven letters. It can either cut you open to the core and leave you in ungodly pain, or it can free your soul and lift a tremendous weight off your shoulders. The phrase is: It’s over.” —Maggi Richard

We aren’t sure who Maggi Richard is, but she profoundly understands what it means to say goodbye at the end of a romantic relationship.

28. “After a relationship ends, build a bridge, get over it, and burn that bridge so you won’t be tempted to cross it again.” —Unknown

You may need to post this quote on your bathroom mirror as a reminder not to rebuild a bridge after you end a toxic relationship.

29. “Hearts will never be practical until they are made unbreakable.” —The Wizard of Oz

The Tin Man learned the hard way that having a heart is not all it is cracked up to be sometimes.

30. “Love is unconditional. Relationships are not.” —Grant Gudmunson

Even though your relationship has ended, your love may be eternal.

Are you struggling to figure out how to say goodbye? Hopefully, these quotes have helped. You may also want to borrow the words of poets by studying farewell poems written by your favorite writers.

Condolences & what to say Quotes about death