What follows is a list of songs about saying goodbye. While it is not a list of the best funeral songs, some on the list are certainly about death.

Since we don’t want you to become dangerously dehydrated from crying over sad songs, we also threw in some “happy” goodbye songs on the list as well.

If you're facing a goodbye, why not prepare for it by creating a playlist of your favorite songs? You can even share it along with a Spotify gift card for a unique, personalized gift.

Here are some ideas. We’ve divided them into categories, so you can pick the right ones to correspond with your mood.

Tip: If you recently lost a loved one, our post-loss checklist can help you sort through the complicated tasks and challenges you might be facing. 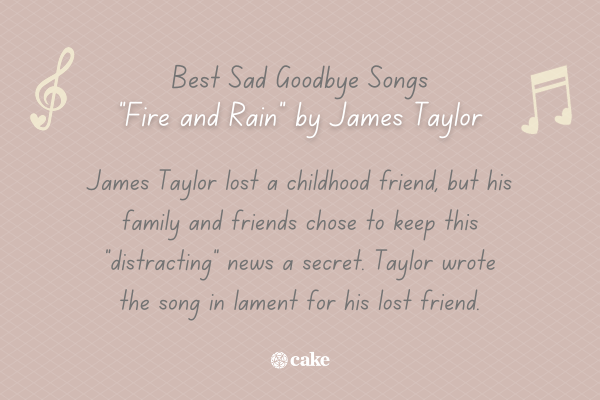 Even though these songs are about saying goodbye, they may not be appropriate choices to play at a funeral.

1. “I Will Remember You” by Sarah McLauchlan

It’s heard at funerals, and it’s played at graduations. It’s been in movies, and the haunting melody instantly brings tears. But what is Sarah McLachlan’s hit song really about? Is it about death, heartbreak, or Alzheimer's? That, my friends, is up for interpretation.

2. “Candle in the Wind” by Elton John

Originally, Sir Elton and Bernie Taupin wrote this song to honor Marilyn Monroe. In 1997, a rewritten version was sung as a tribute to Princess Di after she died in a car accident. Regardless of who was being honored, the song is definitely a sad goodbye.

George Michael’s song about regret, despair, unfaithfulness, and goodbyes was a big hit in 1984. It was originally recorded when George Michael was part of the pop duo Wham! It’s most memorable lines are “I’m never gonna dance again / Guilty feet have got no rhythm.”

Chicago’s bass player, Peter Cetera, wrote and sang the lead vocals for “If You Leave Me Now.” It was released on Chicago X in 1976 and was one of only five non-disco songs to make it to number one during that period. The song was used in 2010 to raise money to fight breast cancer.

5. “The Dance” by Garth Brooks

This song is about the passage of time, and its poignant melody has made it a popular choice for funerals. But is the speaker in the song talking about someone who has died or a break-up? Perhaps only Garth knows.

6. “Goodbye My Friend” by Linda Ronstadt

This is a heartbreaking song about the death of a friend.

7. “Seasons in the Sun” by Westlife

This song, also performed by The Fortunes, is about a man preparing to die when "birds are singing in the sky, and spring is in the air." He asks that his friends think of him, and their seasons in the sun that they spent together.

8. “Who You’d Be Today” by Kenny Chesney

Listen to this sad country song while thinking about a loved one who was taken too soon. The ending line says it all: “ God knows how I miss you.”

9. “Fire and Rain” by James Taylor

James Taylor lost a childhood friend, but his family and friends chose to keep this “distracting” news a secret. Taylor wrote the song in lament for his lost friend.

We know. This song sounds like it should be a sad song. But the speaker in “Leaving on a Jet Plane” hopes that the goodbye he says in this song is not permanent. He asks his beloved to wait for him while he is gone, so they can get married when he returns.

This goodbye song should be at the top of the playlist for every 18-year-old leaving for their first year of college. It’s a song about reflection and hope.

Ok, maybe this song isn’t particularly “happy,” but the video is kind of funny. And the NSYNC boys are undoubtedly happy to get away from the controlling woman.

13. “On the Road Again” by Willie Nelson

The king of road-trip songs, Willie Nelson’s classic is undoubtedly a “happy” goodbye song. After all, he “just can’t wait to get on the road again.”

14. “I’ve Had the Time of My Life” by Bill Medley and Jennifer Warnes

Can you even listen to this song without thinking of the end of Dirty Dancing? Even though the song is reflecting on past experiences, it’s happy and upbeat.

16. “Don’t You Forget About Me” by Simple Minds

This song is played at the beginning and end of The Breakfast Club. Oddly enough, the Scottish group, Simple Minds, had to be convinced to record this song.

17. “Dancing With Myself” by Billy Idol

Even if you have said goodbye to your love, it is important to keep dancing.

Taylor Swift is the queen of the “who needs you?” goodbye songs. “Shake It Off” is just one example.

19. “I Will Survive” by Gloria Gaynor

Goodbyes are sometimes easy. Gloria Gaynor’s power anthem has been inspiring people to move on for generations.

Share your health, legal, funeral, and legacy decisions with your loved ones. 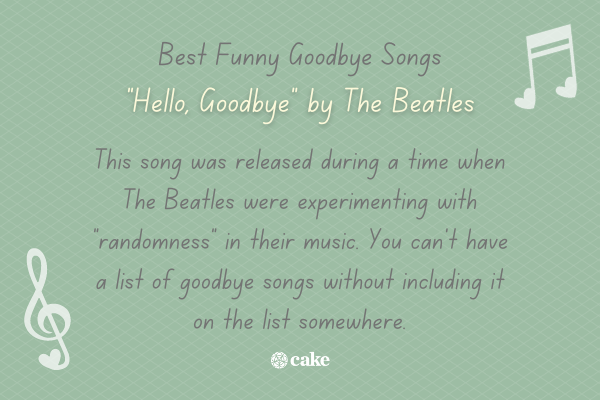 Whether you are leaving a job you hate or saying goodbye to a toxic relationship, here are some songs that put a lighthearted spin on saying “adios.”

This song has been used at basketball games, political rallies, and game shows.

This country singer and film star had a hit with “East Bound and Down.” This goodbye song from Smokey and the Bandit was about hauling Coors beer across state lines. This is the perfect song for a long road trip.

Who knows what this song is about? This song was released during a time when The Beatles were experimenting with “randomness” in their music. You can’t have a list of goodbye songs without including it on the list somewhere.

24. “These Boots Were Made for Walking” by Nancy Sinatra

Although the song itself isn’t funny, watching the video of Nancy Sinatra performing this song will undoubtedly leave a smile on your face.

25. “Take This Job and Shove It” by Johnny Paycheck

How many people have dreamt of saying goodbye to their jobs by playing this Johnny Paycheck classic? Does anyone else think that the singer’s last name is slightly ironic?

26. “We’re Not Gonna Take It” by Twisted Sister

“We’re Not Gonna Take It” is another song that says, “I’m out of here.”

Hopefully, when it comes time to say goodbye to your significant other, you will come up with the perfect rhyming couplet. “Hop on the bus, Gus.” Or “Drop off the key, Lee” are excellent examples.

Ray Charles’s mean woman tells him goodbye in this classic song from the 1960s.

Yeah, we know that this song isn’t meant to be funny. It’s intended to be a song of heartbreak and regret. But who can keep a straight face during the long string of “I know”? After all, the lyric is repeated 26 times.

Saying goodbye to friends is difficult. These songs are a combination of “goodbye” songs as well as “I’ll be there for you” songs.

This beautiful song with an Irish melody acts as a fantastic tribute to an inspirational friend.

Carole King’s classic friendship song is the perfect song to play to a friend who is getting ready to move away.

Are you ever surprised by how many songs from the 1970s were sung by Queen? Here is another song about friendship that celebrates those special people in our lives.

Written during the dust bowl, “So Long” is about a person driven west by the horrible storms in the American Midwest in the 1920s. Although the situation was dire, the song is rather upbeat and hopeful.

This song celebrates the love of good friends.

Fans of “The Office” will remember Michael Scott’s version of this song called “Goodbye Toby.” Regardless of which version is your favorite, this is a classic song of goodbye.

“Wherever you’re going, I wanna go.” This underrated hit by Rihanna is the perfect song to listen to when saying goodbye to a friend.

37. “Tonight, Tonight” by The Smashing Pumpkins

Whether you are leaving high school or flying away on a weird, zeppelin-type contraption, this is a melancholy song that reflects on endings and beginnings.

This song of friendship can be used to send away a friend who is facing an unseen future.

Another end-of-high-school song. John Mayer’s “No Such Thing,” reminds us to live deliberately as we say goodbye to one stage of our lives and enter another. 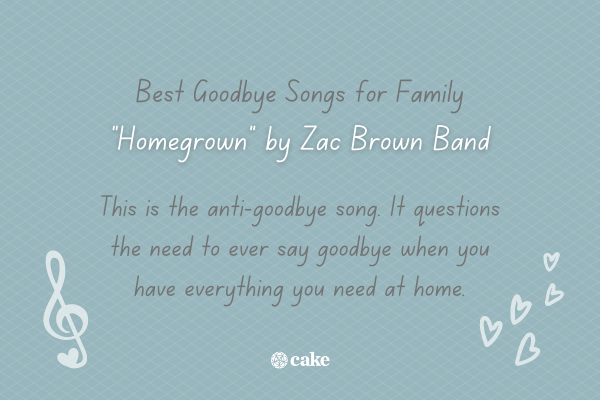 While there aren’t many songs that say goodbye to family members, there are many songs that talk about missing home. Here are some to add to your playlist if you are feeling particularly homesick.

Michale Buble wishes he had never said goodbye as he sings his song celebrating home.

41. “Homeward Bound” by Simon and Garfunkel

Simon and Garfunkel wish they were “homeward bound.” Instead, they are “on a tour of one-night stands, my suitcase and guitar in hand.”

42. “Who Says You Can’t Go Home” by Bon Jovi and Jennifer Nettles

This song is about every teen’s desire to get out of Dodge and regretting that decision later on in life.

We choose to ignore that John Denver was from Roswell, New Mexico, when we listen to this song about going home to the West Virginia mountains.

This song is the perfect one to add to a graduation playlist. “May your dreams stay big, and your worries stay small.”

This song tells the story of saying goodbye to home and looking forward to returning.

This is the anti-goodbye song. It questions the need to ever say goodbye when you have everything you need at home.

This story is not necessarily about regret, but it is definitely about saying goodbye.

48. “The Long and Winding Road” by The Beatles

This beautiful song about going down a road that you’ve seen before will remind you of returning home.

“Hold on to me as we go.” This song is about leaving but starting over in another location together.

We hope we've given you plenty of goodbye songs to add to your goodbye playlist, whoever or whatever you’re moving on from.