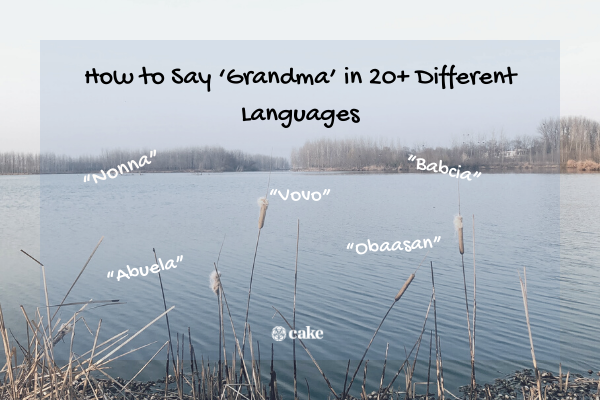 Grandmothers are some of the most influential members of a family tree, whether you call your grandmother “grandma,” “mimi,” or “grammy.” Have you ever wondered what certain cultures call their most beloved family members?

Let’s take a quick trip! Here are a few of the most popular ways to say “grandma” in different languages around the globe.

“Nonna” is the popular name for grandmother in the Italian language. “Nonna” may be altered to “Nonnina,” which translates to “little grandmother.” Some people choose to shorten the name to “Nonni,” which is also the plural form of “grandparents.”

“Obaasan” is the given name for “grandmother” in Japanese. The Japanese language uses a different alphabet system so there are slight variations of the spelling. Children often shorten “Obaasan” to “Baasan,” or “Baa-Baa” for easier pronunciation.

“Oma” in German is the equivalent to “granny” in the English language. It’s a less formal term of endearment. You may also hear it fairly often in other parts of the world because it’s easy for youngsters to pronounce.

One of the most interesting things about the term “vovo” for “grandmother” is that it’s also the same word for “grandfather.” The Portuguese also say “avo” and even simply “vo.”

Some families choose to call one grandparent a slight variation just to make it easier to understand who is being spoken to during a conversation. It may also vary based on personal preferences and formality.

“Babcia” is the appropriate term in Polish if you’re talking directly to your grandmother. Other terms may also include “babci” and “babciu.”

You’re more likely to use these terms if you’re talking about your grandmother instead of directly to her.

Spanish classifies words based on masculine or feminine, which is usually identified as an “a” or “o” at the end of the work. “Abuela” is the feminine word for grandmother, so it ends with an “a.”

“Bubbe” is the most traditional Yiddish term for grandmother but has lost popularity over the years. Many people use “grandmother” instead.

You can identify the more traditional Yiddish families based on what they call their grandmothers.

Greek grandmothers are usually the backbone of their families. These women are known for their fearlessness, cooking skills, and life advice.

They have a reputation for outspokenness and directness, but their families can’t help but love them for it.

“Halmoni” is a term of endearment for grandmothers and other women that may be old enough to be your grandmother.

It’s commonplace for people to respect their elders and this is simply one way to demonstrate that.

Hebrew’s translation may be spelled in several different ways. You may see either “Savta” or “Safta” as the written term for grandmother. Both are correct and may vary based on region.

“Babushka” also refers to a headscarf commonly worn by Russian women. Many people use this term as a way to express their utmost respect for elderly women in their life.

Other, less formal terms may include “la mémé” or “grand-mamam.” The chosen term can vary from family to family.

One of the most interesting things about the Chinese language is that there are actually different terms for maternal and paternal grandmothers.

“Gjyshe” is the Albanian term for grandmother, and in recent years, it has gained in popularity for baby girl names around the world.

It may also be used to honor other female members within the family.

“Yiey,” pronounced “yee-ay” and “yay,” hails from Cambodia, where Khmer is the official language.

“Tatik” is the common term for “grandmother” in the Armenian language. Grandparents are held in high regard in the country.

In fact, there is a popular mountain called “tatik-papik,” which translates as “Grandma and Grandpa.”

“Ouma” is the term of endearment for “grandmother” in South Africa. It may also be spoken as a term of respect for an elderly woman.

The formal way to say “grandmother” in the Hawaiian language is actually “kuku wahine.”

However, “tutu” is another common way to say both “grandmother” and “grandfather.” It’s especially common for younger children to use this word since it’s easier to pronounce.

“Bomma” is the most popular term for grandmother in the Flemish language. People in the area may also use “Oma,” since northern Belgium is so close to Germany.

“Lola” is a popular name in several countries, but many people aren’t aware that it’s actually the Filipino word for “grandmother.” More than 50% of grandparents provide full-time childcare for their grandchildren.

A Name Said with Love

No matter what you call your grandmother, one thing is for certain — she is a beloved member of your family. Understanding some of the other terms of endearment from other cultures allows us to see just how much grandmothers mean to us.

Post-loss tip: If you are the executor for a matriarch after she passes, the emotional and technical aspects of handling her unfinished business can be overwhelming without a way to organize your process. We have a post-loss checklist that will help you ensure that your loved one's family, estate, and other affairs are taken care of.