Like in many traditions around the world, remembering the dead played an important role in daily life for the people of Ancient Greece. For these Greeks of long ago, the afterlife wasn’t always a pleasant place. This was the time of Homer’s famous The Odyssey, a tale of dramatic triumphs and perils centered around Greek mythology.

When The Odyssey’s hero Odysseus meets Achilles, the warrior sums up the experience of the afterlife in Ancient Greece. He explains, “I’d rather slave on earth for another man—some dirt-poor tenant farmer who scrapes to keep alive—than rule down here over all the breathless dead.”

The Ancient Greek people remember their loved ones, keeping them at the forefront of their daily practices and traditions. Learning about death in different cultures gives us perspectives into our own lives. Now, let’s examine Ancient Greek mythology and the role of the afterlife to draw our own modern connections. 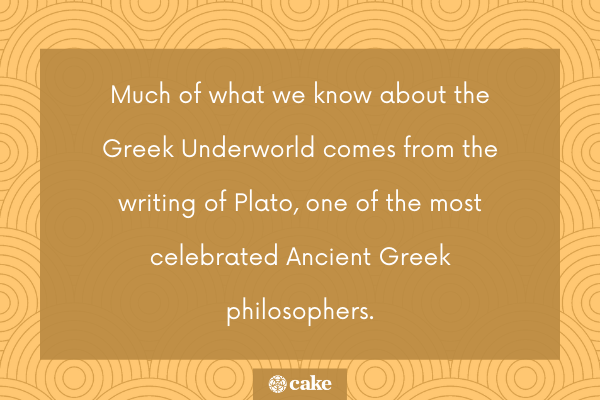 Much of what we know about the Greek Underworld comes from the writing of Plato, one of the most celebrated Ancient Greek philosophers.

In his writings, Plato explains how the Underworld is divided depending on how individuals act during their lives. For those who devote their lives to goodness, they’re rewarded with a pleasant afterlife experience. Like Heaven, life is even better after death for those who lived a moral life.

On the other hand, those who indulge in baser pleasures don’t have the same luxury to look forward to after death. For the vast majority of souls in the Underworld, a bleak existence waits after death.

The worst souls face a fate worse than death. It’s like living the same nightmare on repeat. The Underworld was a place of shadows, darkness, and hopelessness for all but a select few. Only the most exceptional mortals are blessed with eternal happiness in the Greek afterlife.

What gods inhabit the Underworld?

There are only two Gods of the Underworld, though others come and go according to Greek mythology. The most well-known and powerful god of the Underworld is Hades, the God of Death. He’s the leader of this dark world, and he oversees all the souls at rest.

Persephone’s mother, the goddess of agriculture, grew depressed and famine ensued across the land. Zeus intervened, forcing Hades to let Persephone go back to her mother.

Who else goes to the Underworld?

All souls depart to the Underworld after death, but there are other spirits and deities who occasionally call this dark land their home. The God of death (Thanatos), the god of sleep (Hypnos), and the goddess of the night (Nyx) all live in the Underworld.

There are also many famous Gerek myths of gods and heroes who enter the realm of Hades. Heracles is the most common, of course, even if the Disney classic doesn’t do the story justice. According to myth, the Underworld is only for the gods and the dead.

What Are the Three Levels of the Underworld? 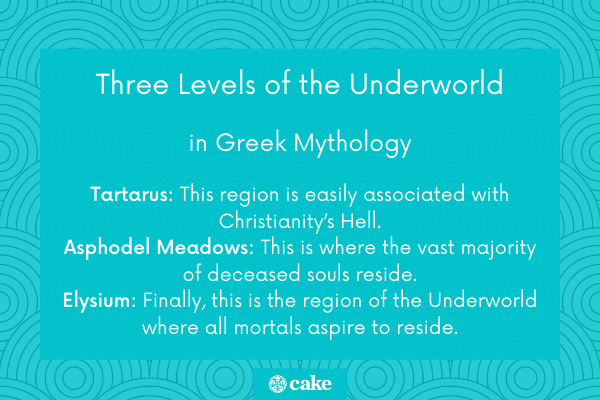 As mentioned above, there are different divisions of the Ancient Greek Underworld. Each soul goes to a specific geographic area depending on the life they led. The three levels are as follows:

The vast majority of souls aren’t bad enough to warrant Tartarus, and they’re not good enough for Elysium. As such, they spend eternity in the Asphodel Meadows, an endless greyness. Though it’s not always easy to understand the Greek mythology behind this belief system, there are clear similarities between modern religion’s understandings of the afterlife.

What Do Souls in the Underworld Do?

Once deceased, souls take a journey to their final resting place in the underworld. First, souls cross a mythological river into the Underworld. They’re ferried by Charon, the infamous boatman tasked with taking souls to the underworld.

According to legend, Ancient Greeks placed coins in deceased loved one’s eyes as a way to offer payment to Charon. This became known as Charon’s obol.

After arriving from the ferry to the Underworld, souls enter through the gates. The gates keep people in but don’t allow human souls to exit. Finally, deceased souls meet a panel of judges who pass sentences based on the mortal’s lives.

As mentioned before, most end up in the neutral Asphodel Meadows. Some receive a special sentence to the other destinations.

For those cursed to Tartarus, the time is spent in a cycle of pain and suffering. Like Hell, this is a neverending nightmare. There is no way out of Tartarus in Greek mythology.

For those who are lucky enough to go to Elysium, they’re greeted with an eternity of rewards and pleasure. Time is spent leisurely as one wishes.

The majority of human souls don’t do much in the Underworld. They face a bleak, grey existence of nothingness. While this might sound harsh, it’s a reasonable alternative to eternal punishment. The hope of reaching Elysium drove many Ancient Greeks to lead moral, fulfilling lives.

Greek Duty to the Dead

In Ancient Greece, honoring the dead is a part of daily life. To not honor the dead is considered impious and frowned upon socially. Regardless of the type of life the individual led, whether virtuous or otherwise, they were to be remembered by friends and family in death.

Proper burial is a way to honor the deceased, and the funeral traditions were very elaborate. Similar to Viking funeral practices, the body was laid out, there was a procession, and the body was either buried or burned. Special funeral pyres were used for these occasions. Graves were marked with sculptures, carvings, statues, and other memorials. Today, much of the art and cultural artifacts leftover from Ancient Greece are part of these memorial structures.

Facing Eternity in the Greek Afterlife

Taking a look at Ancient beliefs in regards to the afterlife gives a glimpse into how things used to be. In a world where famine, war, and death were closer than ever, it’s no surprise that humans adapted a bleak interpretation of what comes after death.

In Greek mythology, mortals are doomed to spend their eternity after death in the Underworld. They’re watched by Hades, the God of the Underworld, and they’re at the mercy of their decisions during their limited time on earth. Those who led the life of a hero could kick back and relax once their days were up. For those who don’t reach these standards, there was much less to look forward to after death.

Ultimately, Greek mythology about the Underworld is a reminder to consider our own legacy and impact. When studying a time and culture like Ancient Greece where honoring the dead is a sign of piousness, what can we learn? Those who came before us found meaning and balance in a world that held more questions than answers. They proved that human memory and legacy is one of the most powerful myths of all.