Since the dawn of time, humans have tried to answer life’s biggest question: What happens when we die? In many cultures, possible answers lied in the many symbols of death. Things like black cats and images of the grim reaper remind us that death is always lurking in the shadows.

For those from ancient times, death was much closer than it is today. War, famine, and disease took people from this earth before their prime. To provide some clarity and comfort, ancient people assigned gods to overlook their dead and the afterlife.

Ancient Greeks, in particular, had multiple gods of the dead. While this might sound sinister, these were complex, intriguing narratives based on myths and culture. In this guide, we’ll share a full list of Greek Gods of death and their stories. 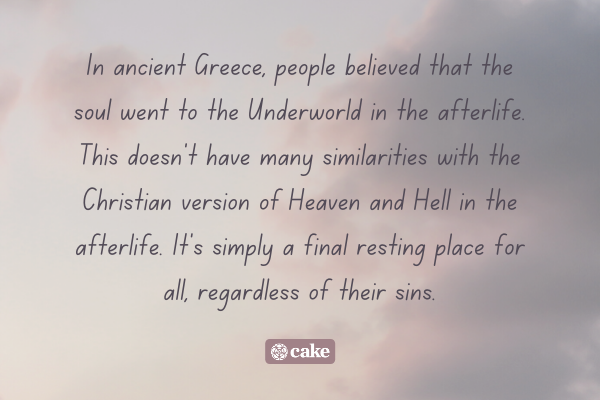 Before we begin, it’s worth discussing Greek afterlife and what people thought happened when you die. In ancient Greece, people believed that the soul went to the Underworld in the afterlife. This doesn’t have many similarities with the Christian version of Heaven and Hell in the afterlife. It’s simply a final resting place for all, regardless of their sins.

There is a lot of mythology surrounding the ancient Greek afterlife. If you’ve ever read Homer’s Odyssey, then you’ve already encountered a lot of this thinking. The Underworld wasn’t a pleasant place, nor was it Christianity’s hell. In the Odyssey, Achilles says it best. He explains that he would rather be a landless slave on earth than a king in the Underworld.

The afterlife in ancient Greek was greatly defined by the philosophers and thinkers of the day. Plato articulates the different plateaus of the afterlife in his work The Phaedo. In his version, a person’s “goodness” is what marks their place in the afterlife. They were rewarded with a more pleasant version of the Underworld, though this is far from Heaven.

Ultimately, a person’s fate in the afterlife depending on how their loved ones remembered them. Mourning and remembrance played a large role in ancient times as they do now. It was important to look upon these memories of the dead fondly and to keep ancestors close. Now, let’s examine the many different Greek gods of death and their role within the afterlife.

The Greek gods of death include:

Demeter is a Greek goddess also known as the “Dark Mother.” She is the mother of Persephone, the goddess who is abducted by Hades, king of the Underworld. Once her daughter is taken by Hades, Demeter’s grief is said to have caused all the crops on earth to die and stop growing altogether.

Though Persephone returns to earth, she is doomed to spend six months of the year with Hades in the Underworld until the end of time. Because of this, the earth dies at the beginning of autumn and through the early months of spring with Demeter’s mourning. 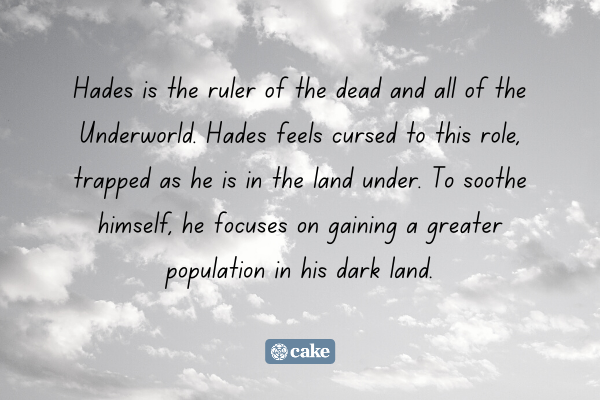 It’s hard to talk about the Greek afterlife without also discussing the king of death himself: Hades. The three brothers, Hades, Zeus, and Poseidon, all have an important domain under their control. Zeus is the king of Olympus, Poseidon is the ruler of the sea, and Hades is the god of the Underworld.

Though he’s often thought of us as the “god of death,” this actually wasn’t his role. That title belongs to Thanatos. Still, Hades is the ruler of the dead and all of the Underworld. Hades feels cursed to this role, trapped as he is in the land under. To soothe himself, he focuses on gaining a greater population in his dark land.

In the Underworld, Hades rules with his queen, Persephone. Though he’s assigned to judge and torture the deceased in the Underworld, this was something he often assigned to one of his minions. Like death himself, he is not easily moved or changed by stories of grief or sorrow.

The Furies in Greek mythology are goddesses of revenge and death. They are personified curses, aiding Hades in the Underworld. Though their origin isn’t clear today, there are some ideas for where the Furies developed from. Most believe they were originally ghosts of the murdered, turned into goddesses of vengeance.

There are three different Furies referred to throughout Greek mythology. The first is Allecto, the goddess of anger. The next is Tisiphone, the avenger of murder. Finally, there is Megaera, the jealous fury. Together, they reign with Hades in the Underworld. These were the ones who punished the dead souls in the afterlife. 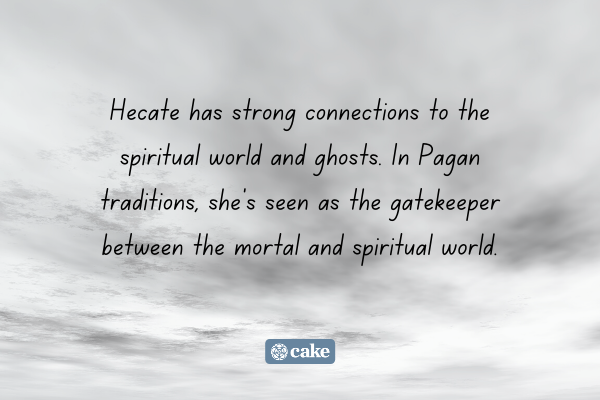 Originally, Hecate was a goddess of fertility and childbirth. However, over time, she earned an association with the moon and the Underworld. She gained more recognition during Halloween time since she’s also the goddess of the witches.

Hecate has strong connections to the spiritual world and ghosts. In Pagan traditions, she’s seen as the gatekeeper between the mortal and spiritual world. Though she’s not nurturing in a motherly way, she’s still seen as a protector for warriors, shepherds, and even children. Like the Furies, she’s not afraid to seek revenge on those who wrong the ones she loves most.

In Greek mythology, there’s the myth of Chaon’s obol. This was the belief that relatives needed to place coins in the eyes of the deceased. The coins were a form of bribe or payment for Charon, the ferryman of the dead.

Charon was one of Hades' many gods in the Underworld. He would lead the dead through the river leading them to their new realm. For those who couldn’t pay the ferryman or couldn’t afford a proper burial, they would spend centuries lingering along the riverside.

Nyx is the Greek goddess of the night. She was also one of the first Greek gods, forming at the dawn of creation. Created by both air and darkness, she gave birth to both light and day.

Nyx is one of the more mysterious gods of ancient Greece. She was seen as the very substance of night, nothing but a veil of dark mists. She spent her time in the Underworld with Hades, helping him look over the dead.

Cronus has a gruesome, complex history in Greek mythology. He overthrew his mother and made himself sovereign of the entire world. The father of Hades, Zeus, and Demeter, and Poseidon, he was one of the most powerful of the gods. Unfortunately, his wife saw into the future to prophesied that one of his children would overthrow him one day.

To keep this from becoming a reality, he swallowed all but one of his children—Zeus. Zeus freed his siblings later in life, overpowering his father. Cronus was thus imprisoned with the Titans. Eventually, he reconciled with his son and reigned over the Island of the Blessed Dead.

Of course, no guide to Greek gods of death would be complete without Thanatos. Thanatos is death personified. He’s the son of Nyx, the goddess of night, and the brother of the god of sleep. He’s a relentless, merciless god that believes all mortals should be subject to death eventually. Death, in the form of Thanatos, is the great equalizer.

The Greeks believed Thanatos is the one to carry humans off to the Underworld. The Fates, or the goddesses of destiny, determine a human’s time on earth came to an end, and they would meet Thanatos. He was the grim reaper of Greek mythology.

There are some figures who defeated death himself according to legend. Both Heracles and Sisyphus defeat Thanatos and live to see another day.

Though it’s not possible for humans to defeat death, it’s a concept that’s appealing for obvious reasons. In fact, the study of death and death practices is named Thanatology after this god.

Stories of Death in Ancient Greece

These myths might sound far-fetched today, but they’re one of the many answers to an age-old problem. For the ancient Greek people, mythology and gods helped explain the things that couldn’t be explained. With death resting at the end of all of our lives, it’s no wonder the Greeks looked for gods and goddesses to look over them during this complex time.

This list of Greek gods of death shows that death takes many forms. It’s not always scary and dark. It can be merciful, and it can be just another adventure. It’s also ruthless in that it doesn’t discriminate. Ultimately, death is one of the biggest questions humans have to answer for themselves.