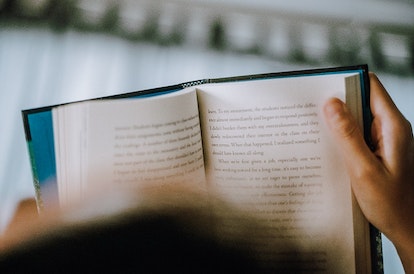 The value of a poem lies in how it makes you feel, think, or believe. Or, how you carry it with you after you put it down.

Poems can speak to happiness, sadness, love, loss, and grief. They hold lessons and stories, emotions and farewells. Some poems are so gripping they’re impossible to ignore. But with the pain captured in verse, we can find a little solace.

Whether a child, parent, spouse, or furry companion, poetry has the uncanny ability to take one back to the moment—back to the place a heart needs to feel. Oftentimes, that feeling is despair and loss, but sometimes, intolerable grief is followed by an unexpected hope, too.

Short poetry is often immeasurably dense and intense. Read these slowly, and absorb and reflect on every line.

For some, grief leaves them feeling isolated and cold inside their own emotions. Others wonder how to weep more, moan louder, or summon the will to live inside what feels like the most profound depression ever experienced. In the poem "Grief," you'll note both of these ideas.

2. "The Apple Tree" by Dorothy Parker

Dorothy Parker was an author, critic, and poet born in 1893. Her poem, "The Apple Tree," reveals the weight of grief that many people carry throughout life through the metaphor of the boughs of an apple tree.

This Irish poem is from the point of view of the deceased. They say they are ever-present in the wind, snow, ripened grain, and even the rain—that their love follows you from daybreak to dusk and back again.

In "Music, When Soft Voices Die," Percy Bysshe Shelley constructs a bed of rose petals to hold every little memory forevermore. His poem is a reminder that the echoes of love are cherished and eternal.

Sylvia Plath observes that the grief in miscarriage is unknowable to others. She watches other people's children play, feels her hopes for this child wane, and in the moonlight, grieves the loss of a sibling for her daughter.

» MORE: Are you helping someone through a loss? Make sure you're on the right track with this post-loss checklist.

Poems About Grieving Your Mom or Dad

Some parents have watched you through nearly every stage of your life, making their loss most profound.

William Allingham expresses that when autumn of life has finally been reached, there’s also dignity. Though there is eventual nighttime for everyone, robins still sing—life still carries on.

Kimberly Flanagan’s poem is about the loss of a dear friend. Grief would then compound doubly if a parent relationship has transitioned also into a friendship.

This poem is at the father's request. Because he has lived a long and loving life, filled with a wife, children, and grandchildren, he asks that his loved ones not to mourn his happy life.

Dylan Thomas writes that all men face the same fate whether they were “wise, good, wild, or grave.” But no matter how one has lived, Thomas challenges his father to make the choice to face death with fight and insight.

In the funeral poem "Dirge Without Music," the poet laments with equal annoyance and resentment. That someone so lovely and bright should spend the balance of time in a dark, dusty grave is a pity to their beauty and light.

Poems About Grieving a Partner or Spouse

Jamie Anderson writes, “Grief is just love with no place to go.” He’s right. And each poet below captures that spirit in some way.

"Annabel Lee" exposes both the physical and mental torment of the poet. This ability to capture such introspection explains why both Edgar Allen Poe’s poetry and history are found inside so many grief blogs.

If you remember only one line in this poem, then remember, "I am pitiful in my love for you." Nikki Giovanni has fully captured what it is to believe that you'll never want or be able to love again by exposing how it is to resign to love so completely.

Ada Limón begins, “You ever think you could cry so hard / that there’d be nothing left in you, like / how the wind shakes a tree in a storm / until every part of it is run through with / wind?” Talented poets can write like they are looking into the depths of a soul.

14. "If Grief for Grief Can Touch Thee" by Emily Brontë

Emily Brontë thought that if one devotes enough energy to both pain and angst, it should be enough to retrieve what is lost. It should then be possible to live inside one’s grief in search of salvation as much as one would live inside love looking for the same reprieve.

Until a friend helped her with clarity, Mary Oliver could not lift herself from the weight of melancholy. Then, she slowly recognized the return of laughter. Further, how often the most beautiful things go without reward.

16. "As the Sparrow" by Charles Bukowski

As with all old chestnuts who reach a somber and albeit sober realization, understanding the magnitude of one’s love when it is too late is gut-wrenching.

Poems About Grieving a Pet

Losing a pet can be as debilitating as losing a human loved one. After all, they can be like children.

In "Epitaph to a Dog," Lord Byron's dog, Boatswain, has contracted rabies. Byron, like any loving father, remained steadfast until the end. Certainly, that devotion is no less than what man's best friend truly deserves.

A dog’s natural, slow observations and keen nose are often a fountainhead of joy. But no matter how much you want them to share their earthly secrets with you, nature will only grant you one unsettling truth: losing your pup is forever and always much too soon.

19. "A Dog for Jesus" by Rudyard Kipling

To love a dog so much that you wish for them to meet you in life's beyond is precisely the thing of which most people hope and dream. And what better place for a constant companion than to be effortlessly bounding, happy and safe up above.

"I Loved You Best" is so sincere in its impartiality and grief. What is it like to have that last kiss on their nose or final gaze into their eyes and expect to remain unbiased with any future pet? Willis’s honesty is overwhelming.

This poem is for those who still think of their cat every day. If you still have broken visions upon half-waking or when glancing into a half-lit corner, then you understand. The sweetest ones never leave—no matter how much time creases life.

Holidays inundate us with reminders of loss. Our memories land inside every holiday song and around every decorated corner.

Not only was Maya Angelou one of America's greatest poets, but she was also one of the most prolific civil rights advocates. In this poem, "When Great Trees Fall," Angelou captures the exaltation in the return of one's spirit.

Longfellow's poem speaks to those who find themselves inside their heads, sorrowful but holding onto the gleaming memories of a loved one. It's nearly magical to be able to capture those simple little moments over and over again.

Alan Harris’s "Wounded Holidays" speaks to those parents who have lost a child and the particular difficult reminder of the loss around holidays.

25. "The Year Before Last" by Unknown

A mother's heart stands still in time when she loses her son. Whether a day, a year, or 10, no amount of time will pass before her grief ends.

Though the Words Are Few, the Sentiment Is Great

Talented poets can elicit the most profound responses in the shortest phrasing. Hopefully, one of the poems above has helped you find the space in your head to acknowledge your grief so that your heart can begin to heal.