Chances are you’ve celebrated either Halloween or Day of the Dead — or are at least familiar with both. Though there are some significant similarities between the two holidays, there are quite a few glaring differences.

We’ll discuss both similarities and differences between Halloween and Day of the Dead below. So, the next time late October rolls around, you’ll practically be an expert. Use your knowledge to help others celebrate accordingly and appropriately.

How are Day of the Dead and Halloween Similar? 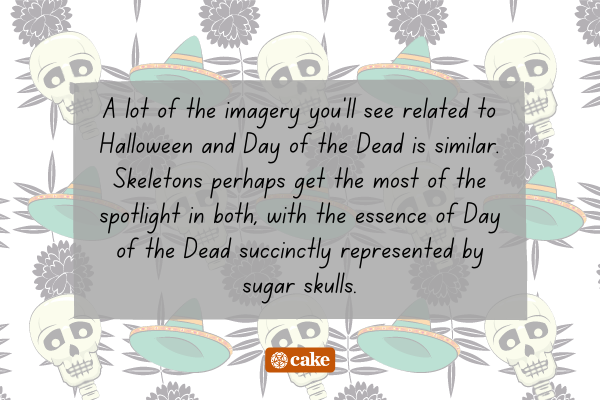 Halloween and Day of the Dead have significant similarities, but by no means are they the holiday nor can they be celebrated interchangeably. You’ll likely witness the similarities below in the coming year if you haven’t already.

You’ll likely see a lot of the same colors when preparing or decorating for Halloween or Day of the Dead. There is a significant amount of black associated with both holidays, but both incorporate pops of color with oranges, purples, whites, reds, and more.

A lot of the imagery you’ll see related to Halloween and Day of the Dead is similar. Skeletons perhaps get the most of the spotlight in both, with the essence of Day of the Dead succinctly represented by sugar skulls. There are a few differences, too, and you may notice that Halloween décor has shifted over the years to borrow more from Day of the Dead.

Halloween falls on October 31 every year, and this also marks the beginning of the Day of the Dead celebration. Though Halloween runs just one day, however, Day of the Dead runs until November 2. Both holidays stem from All Hallows, a Catholic holiday, just in slightly different ways we’ll discuss later on.

October 31 is significant in both schools of thought since it is considered the day when the separation between the living world and the spiritual world is the thinnest, But, the door is open entirely, depending on your interpretation. Here’s an October bucket list you may also be interested in.

4. Ties to spirits, monsters, and death

Halloween and Day of the Dead both fall on days when the spirit world is supposedly very active and accessible, and this isn’t by accident. Both have histories that run thousands of years, and thus have thousands of years of history filled with lore about spirits, monsters, and ghouls as well as saints, too.

Halloween and Day of the Dead provide a unique opportunity to share stories, tales, folklore, and more that may not be discussed during other seasons.

Halloween-esque and other scary movies are popular throughout the year just about everywhere in the world, but they hold a special weight during the later weeks of October and early November. The same goes for Day of the Dead.

Both holidays may have celebrants dressing up in festive attire and gathering for a parade. Like many holidays, Halloween and Day of the Dead provide an opportunity for friends and family to gather together to celebrate both life and death.

Halloween and Day of the Dead incorporate specially themed menus and festive food and drink. When you think of Halloween, of course, you likely think of candy and party foods as well as funky cocktails. Day of the Dead isn’t much different at all, but we discuss some differences below.

8. Transforming oneself with clothing and makeup

Halloween and Day of the Dead both place a huge importance on becoming someone else for the celebration.

With Halloween, of course, you’re not really limited to dressing up as a skeleton or sugar skull-type character. Day of the Dead, like Halloween, typically involves a lot of dramatic makeup changes as a means of transforming oneself, too.

How are Halloween and Day of the Dead Different? 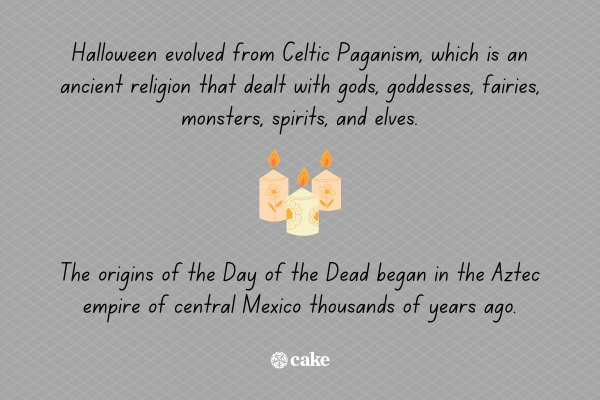 Though we’ve already talked about eight or so similarities between Halloween and Day of the Dead, their differences are pretty significant, too. These two holidays basically converge in the middle and overlap and have done so over time. Of course, this has a lot to do with cultural diffusion and the increasing interconnectedness of our world, to get technical.

9. Meaning and origin of Halloween

Halloween evolved from Celtic Paganism, which is an ancient religion that dealt with gods, goddesses, fairies, monsters, spirits, and elves. In order to appease the evil entities associated with this holiday, the Celts started a holiday on October 31 known as the feast of Samhain.

They chose this day, because, as we discussed, the veil between the spirit world and the living world was the thinnest. The Celts would sacrifice animals and crops and priests, known as druids, would communicate with the dead and predict the future.

Also early on in Halloween’s history, Roman influence played a huge role. The Roman empire expanded to Celtic regions, bringing with it the holidays known as Feralia and Lemuria. In their own way, each day served as a way to honor the dead and bring the living community together.

10. Religious significance of Day of the Dead

The origins of the Day of the Dead began in the Aztec empire of central Mexico thousands of years ago. A huge part of the celebration focuses on leaving offerings and gifts to deceased loved ones who are on a journey through the afterlife. According to Aztec culture, the final resting place for the dead is known as Chicunamictlan, the Land of the Dead.

Though there are strong ties to Mexico, the Day of the Dead also had similar early celebrants in Europe, particularly Spain. On All Souls’ Day, those of Spanish descent would leave wine and bread on their loved one’s graves. These traditions were brought to other areas of the world over time through emigration and diffusion.

11. Where Halloween is celebrated

Halloween is largely celebrated in the U.S. and Canada, but still has a strong influence in its Celtic roots — Ireland, Scotland, and Wales. Halloween is also celebrated to some extent in Western Europe.

12. Where Day of the Dead is celebrated

Halloween food, as we’ve discussed, typically involves variations of party food that’s made to be spooky or creepy. Much of what you’ll consume on Halloween, too, likely involves things like various candies, candy corn, fall foods like candied apples, pumpkin-flavored dishes, and more.

On the other hand, Day of the Dead doesn’t focus around ridiculous quantities of candy or mini hotdogs mummified in puff pastry. Day of the Dead food doesn’t stray too much from typical Latin or Mexican cuisine, incorporating classic dishes like tamales, enchiladas, churros, and mole.

Dressing up for Halloween, for kids, is one of the most exciting times of the year. And, honestly, it can be for adults, too. It’s a day when you can dress up as just about anything you want and run wild (within reason).

Dressing up for Day of the Dead also involves the same spirit of running wild. Typical Day of the Dead dress involves painting one’s face to resemble a sugar skull or constructing a paper-mache head in the same likeness. Celebrants also typically cover themselves in shells or other noisemakers as a way of rousing the dead.

Halloween activities may include parades, as we discussed, but they’re a bit different in spirit than those participated in by celebrants of Day of the Dead. Halloween parades likely include a lot of different characters, like superheroes, monsters, famous people, animals — just about anything.

Halloween is also, of course, best-known as a day of trick-or-treating by younger children. It’s also a common time of year to have movie marathons, parties, go to haunted mazes, houses, theme park events, and more.

18. Day of the Dead activities

Day of the Dead parades are expected to occur, and will showcase a lot of Catrina-esque imagery. La Catrina — a female skeleton in an elaborate, flower- and feather-adorned hat —  has become the most recognizable symbol of the Day of the Dead. Participants all dress in a similar fashion or bring representations of her with them to decorate their loved one’s graves.

On that note, grave decoration is a huge aspect of Day of the Dead. Though it's common to leave flowers and small gifts at memorials or gravesites in the U.S., it’s basically expected and welcomed in Latin American countries. These gravesites and cemeteries also serve as the backdrop for loud parties and gatherings held by families to connect with their loved ones on either side.

The next time you celebrate Halloween or witness a Day of the Dead celebration, take some time to recognize the similarities and differences we discussed. To better honor our shared histories, it’s important to understand the origins of our habits and customs. Truly appreciating the differences we have can help us better celebrate our similarities.

Check out the rest of Cake for articles on Mexican cultural traditions, Pagan funerals, and much more.