Fall symbolizes the changing seasons, the smell of pumpkin bread, and the beginning of one of America’s most adored holidays—Halloween. As the leaves change colors, so does the mood—into one of preparation for your favorite spooky traditions.

But do you know Halloween didn’t begin in America? Although Americans spent 8.8 billion dollars on Halloween preparations last year, the holiday has its roots in ancient traditions.

Halloween gets its name from All Saint’s Day, or All Hallows, a Catholic holiday for celebrating the saints. Later, the name changed to Hallow Evening and finally Hallowe'en. But before then, it was Samhain, a Celtic harvest festival.

In this guide, we’ll elaborate on Halloween’s origins and traditions, both new and old.

Halloween’s Origin: Why Do We Celebrate Halloween? 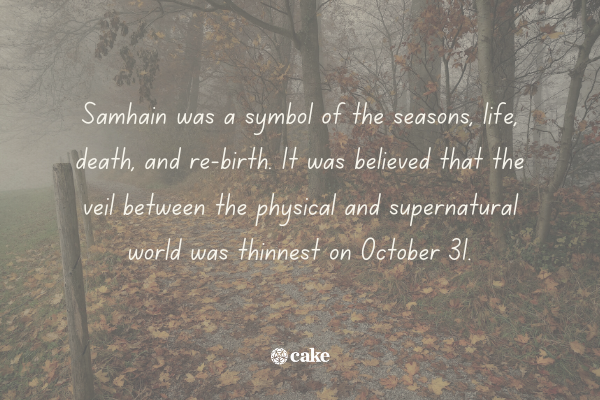 After you dress up in costume and finish indulging in the last bits of candy leftovers, you may wonder, why do we celebrate Halloween? The eerie Halloween origins of ghosts and ghouls come from pre-Christian sacrifices to the lord of the dead and evil.

Let’s take a look at where Halloween came from and how it’s evolved to one of the most loved holidays in cultures around the world.

The Celts were a group of people living mostly across Great Britain, Ireland, and France. They practiced an ancient form of religion called Celtic Paganism.

Pagans believe in many gods and goddesses. In addition to multiple gods, the Celtic people believed in creatures from fairies and monsters to spirits and elves. The rhythm of the season was especially important to them, so they formed seasonal celebrations like the feast of Samhain.

Samhain was a symbol of the seasons, life, death, and re-birth. It was believed that the veil between the physical and supernatural world was thinnest on October 31. Spirits could travel to communicate with the living, and fairies could entrap humans forever.

To appease the supernatural, the Celts gathered to sacrifice crops and animals. Celtic priests called druids led the people in a ceremony to communicate with the dead and tell the future.

As the Romans conquered Europe and eventually the Celtic countries, they brought their death traditions with them.

Feralia was the Roman day of the dead. The Romans visited tombs to leave gifts in memory of their loved ones. Another celebration was Lemuria, a time to honor spirits that died untimely deaths of war or starvation. Just like Samhain, these festivals brought communities together. Eventually, Roman customs blended with the Celtic traditions to create the foundation for Halloween.

When the Romans converted to Christianity, many pagan traditions related to Halloween were lost. Christian influence on the Celtic people was strong, and as the religion spread across Europe to the Celtic countries, instead of replacing the Celtic beliefs, Christian missionaries changed them.

To halt Samhain, the church established the All Saint’s Day feast instead, though it wasn’t wholly successful. People continued to celebrate the evening of October 31st as All Hallows Eve, now Halloween.

How is Halloween Celebrated Today? 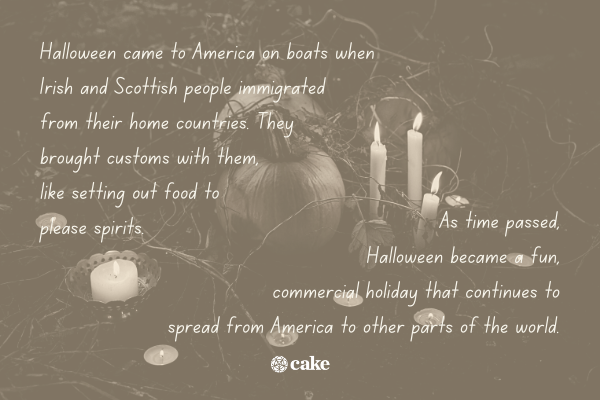 As you can see, the origins of Halloween are ancient, but since Celtic times it’s remained a gathering for friends and family.

Halloween came to America on boats when Irish and Scottish people immigrated from their home countries. They brought customs with them, like setting out food to please spirits. As time passed, Halloween became a fun, commercial holiday that continues to spread from America to other parts of the world.

Halloween is the same day every year, October 31. The date has its origins in Samhain that fell on the same day. On this day, the veil between the physical and the supernatural is thinnest.

Some Americans celebrate during the day by organizing parties and playing games. Most people celebrate in the evening with trick or treating.

Halloween became popular in America but continues to spread to countries around the world. It’s especially popular in the Celtic countries it originated from like Ireland, Scotland, and Wales. People there celebrate similarly to Americans. Although not as popular as the United States and Canada, western European countries celebrate Halloween, too.

In Latin America, people celebrate Dia de los Muertos or the Day of the Dead. People take to the streets, perform rituals, and visit gravesites. Remembering the dead is also a common theme in Eastern European countries where, among modern Halloween traditions, people celebrate their own ethnic holidays. 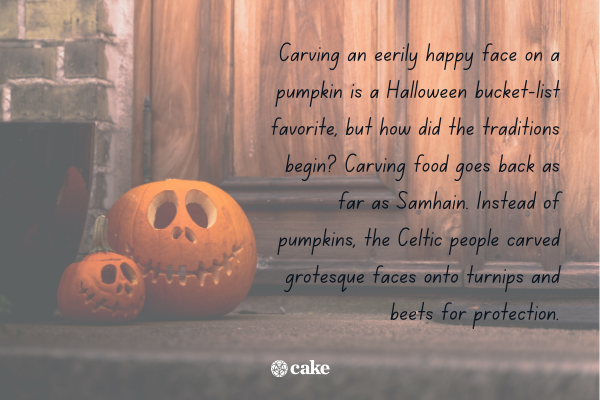 In Celtic times, Samhain was a time to connect with the spirits, later people became fearful of ghosts and tried to appease them. Today, it’s a time for spooky and thrilling activities.

As mentioned above, before Halloween, there was Samhain. Samhain symbolized the end of the harvest season and the beginning of winter. The Celtic people embraced change and viewed it as a time to worship.

Practitioners gathered in the forest to light bonfires and honor the dead. Fortune telling and games were common activities. Peeling apples to tell the future and offering food and drink were other ways to keep spirits happy.

Many people around the world continue to observe Samhain instead of Halloween as part of pagan religions. For example, Druids practitioners are still around today and meet at Stonehenge—a bucket list destination in the UK—for Halloween worship. Additionally, Wiccan funerals often use the same prayers the Celtic people did.

Halloween is a time to dress up in your spookiest costume, but have you wondered why? The popularity of supernatural monsters and fairies comes from the Celtic people’s beliefs in them.

Not only did the souls of the dead come out during Samhain, but these spooky beings did, too. Samhain worshippers wore animal skins and heads, so the spirits and creatures wouldn’t recognize them.

Early Halloween participants believed their costumes kept monsters and spirits away from them. As pop culture became more popular in America, families turned to commercial characters and entertainers for their costume inspiration.

Today, costumes are less about scaring away monsters and more about getting together with family in a fun way.

Community gatherings have always been at the center of Halloween. From the first Samhain bonfires to medieval gatherings, Halloween brings family and friends together. Early Halloween celebrations focused on fortune-telling, playing games like bobbing for apples, and even mischief. It wasn’t uncommon to find young children playing pranks in disguises on Halloween.

One of the most popular ways communities come together is trick-or-treating. Children go door to door asking neighbors if they’d like a prank or to give them candy. Trick or treating has its roots in medieval Europe. Early Halloween participants went “mumming” or “souling.”

Instead of going door to door, the first trick or treaters put on mumming performances for the community. Souling was done on October 31st. On souling day, poor families went door to door begging for money, apples, or cake. Souling became popular with children, and it’s probably the inspiration for trick or treating traditions today.

Carving an eerily happy face on a pumpkin is a Halloween bucket-list favorite, but how did the traditions begin? Carving food goes back as far as Samhain. Instead of pumpkins, the Celtic people carved grotesque faces onto turnips and beets for protection.

The original story of the jack o’ lantern comes from an Irish legend that made its impact on America. Jack was a trickster eviler than the devil himself. He wasn’t allowed to enter heaven or hell because of his deeds.

Instead, the devil made Jack wander the earth forever with only a lump of coal and turnip to light the way. Jack put the coal into the turnip, leading Irish children, and later American families, to adapt the tradition.

If carving pumpkins and decorating isn’t your jam, starting end-of-life planning might be. It’s natural for thoughts of death and the after-life to cause anxiety during the Halloween season.

One of the best Halloween gifts you can give yourself and your family is gathering to start an end-of-life checklist. A check-list can help you decide what your death traditions will be and who will plan them.

Halloween is America’s spookiest celebration, but it’s not just about dressing up. Halloween and other death celebrations make us think about our own mortality. By decorating our homes, carving jack o’ lanterns, and demanding candy from strangers we are celebrating life and death, just like the Celts used to.