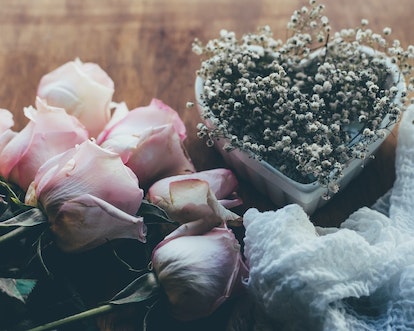 Wishing a partner or spouse a Happy Anniversary is a reminder that you value the love they’ve shared with you. On top of that, you can express your appreciation for other important people in your life, whether they be friends or family, by helping them celebrate their own anniversaries.

You also might want to do so in a unique way. Sending a basic happy anniversary message is fine, but there are other options worth keeping in mind if you want to make a stronger impression.

These are a few noteworthy examples. They’ll help you send the kind of happy anniversary message that genuinely gets your point across.

‘Happy Anniversary’ Wishes for Your Spouse or Partner

Merely saying “Happy Anniversary” isn’t always enough to let your partner know you love them. Consider one of these unique ideas instead!

1. Give them an anniversary survey

Some people want their partners to take the lead when treating them to fun anniversary activities and sentimental gifts.

Others prefer to have some control over how they spend the day. If your partner is this type, include a “survey” with your happy anniversary card in which they can choose an activity, a meal, and a gift from a list of ideas.

If your partner was particularly happy with the menu at your wedding, give them a happy anniversary card in the form of the same menu. Just make sure you actually prepare the food yourself!

Have fun on your anniversary by surprising your partner with a letter in the morning explaining your plans to spend the day with an anniversary “scavenger hunt” that takes you to special places from your relationship. It might take a little planning, but there’ll be a big payoff.

4. Plan a surprise day off

Wishing your partner a happy anniversary doesn’t just involve expressing romantic love. You can also express your gratitude for the helpful role they play in your life by surprising them with a planned-out day off.

If you’re getting married soon, collect items and photos for a wedding time capsule, and surprise your spouse with this gift on your first anniversary. If you already have one, this anniversary could be the perfect time to open it!

» MORE: Taking steps after a loved one's death is a final act of kindness. Here's your complete checklist.

‘Happy Anniversary’ Wishes to a Couple You’re Friends With

Wishing your friends a happy anniversary isn’t merely a kind gesture. It can also let them know you enjoyed their wedding, or have simply been thrilled to see their love flourish.

You want your friends to enjoy their anniversary. Thus, you could send them a gift card or a similar digital gift for an anniversary date activity.

It’s common for significant others to post about their love on an anniversary. However, you could treat your friends to a nice surprise by also posting about their anniversary, discussing how much you admire them as a couple.

Along with a traditional happy anniversary message, if you’re friends with a couple who have limited free time due to recently becoming parents, help them enjoy their anniversary even more by offering to babysit so they can go on a date.

The official wedding photos aren’t the only pictures a couple may have from their special day. Wedding attendees also tend to take pictures. Remind your friends of their wedding with a happy anniversary card featuring a funny or heartwarming photo they may not have seen.

‘Happy Anniversary’ Wishes for Your Parents or Grandparents

Are you trying to let your parents or grandparents know you want them to enjoy their anniversary? Consider these ideas!

If you know your parents have the free time, surprise them with a happy anniversary message that includes details for a romantic weekend away (that you’ve paid for).

12. Send them a “what we’ve learned from you” message

If you’re currently in a healthy relationship, send your parents a happy anniversary letter or email thanking them for the various lessons they taught you about love.

13. Give your parents a date night gift book

Treating your parents to a date night with a gift card for a restaurant or fun activity is a common way to let them know you appreciate their hard work. If you’re willing to spend a little more, send them a happy anniversary letter or email with multiple gift cards for multiple dates.

14. Help a grandparent say happy anniversary to a deceased partner

Your grandparent’s spouse may no longer be alive. Help them say happy anniversary in Heaven with a visit to their spouse’s burial site or similar activity.

Gathering loved ones for a surprise anniversary party will give your parents or grandparents the chance to reflect on the long and happy life they’ve shared.

‘Happy Anniversary’ Wishes for Your Kids

Whether your kids are grown or you’re merely trying to help a younger child have a fun anniversary, keep these messages and ideas in mind.

Make your kid’s partner feel like a welcome member of the family by sending a card with a family picture that includes them. This will make it clear you accept them as one of your own children.

Just as parents like to know they’ve taught their kids valuable lessons about romantic love, so too do kids like to know their own relationships have reminded their parents how to be good partners.

Don’t overlook traditional happy anniversary message ideas! Your kids (and their partners) might appreciate anniversary letters in which you describe the joy you’ve experienced seeing their love grow.

This happy anniversary idea is ideal for teens. Help your kid enjoy the day by escorting them to a date as if you were a chauffeur driving them to prom.

Parents typically want their kids to enjoy happy relationships. Thus, you may want to send a funny happy anniversary letter thanking your child’s partner for putting up with them.

Posting happy anniversary messages on social media lets a partner know you love them enough to tell the world (or at least all their followers) publicly. Consider doing so with these unique ideas.

Some people prefer happy anniversary social media posts to be on the lighter side. Find or create the perfect funny meme for your anniversary, and surprise your partner by posting it.

23. Tell the story of your relationship in GIFs

This is a fun twist on the above idea. On Twitter (or Facebook if you don’t think you’ll annoy your other followers with too many posts!) post a series of relevant GIFs/memes that “tell the story” of your relationship.

It used to be common for partners and spouses to call into radio stations and dedicate love songs on anniversaries. Update this type of message for the digital age by “dedicating” a song to your partner via a social media post.

This is the type of happy anniversary social media “message” you might want to post if you and your significant other want to digitally celebrate your anniversary together.

When posting on Instagram or Facebook about the wonderful times you’ve spent together over the years, you can both post a picture in which you recreate one of your first dates. Bonus points if you have a picture from that date that you can repost as well!

Wishing someone a happy anniversary via a cake is a common choice for a simple reason: it’s sweet (no pun intended).

That said, a cake usually doesn’t offer a lot of space for a lengthy message. That might not matter if any of these ideas appeal to you:

Fitting a sweet happy anniversary message on a cake can be easier if you and your partner both share knowledge or love of a certain language or similar form of communication. For instance, you can include a message in Morse Code, or reference a relevant Bible passage.

If you want your happy anniversary to say more than you can typically fit on a cake, consider using text shorthand/hashtags creatively.

This is an easy way to make a basic happy anniversary cake message a little more interesting. Just as you might represent someone’s age on a birthday cake with the appropriate number of candles, so too might you decide to mark your anniversary with five candles for a fifth anniversary, six candles for a sixth, etc.

29. “A sweet anniversary treat for my sweetie.”

A happy anniversary message doesn’t need to be complicated. When you’re working with limited space, it really can’t be. You can instead simply focus on being cute.

Many romantic quotes from songs, poems, movies, or books aren’t very long, but they can be very meaningful for a couple. You may want to use such a quote for a unique happy anniversary cake message.

Happy Anniversary: How to Express Your Feelings

Saying happy anniversary in a unique way lets a person know you genuinely feel a deep love for them. These ideas can help.