A hearse is a type of vehicle designed to carry the deceased to their final resting place. Most people are familiar with hearses from their association with cemeteries and funeral homes, but how do these automobiles work, and what makes them unique? You’re likely to spot these cars leading a funeral procession, but how does the process work?

Essentially, a hearse is a vehicle adapted with a long space in the back to accommodate a coffin behind the driver’s seat. Nowadays, this could be a limousine with enough space for a casket. However, they were traditionally horse-drawn carriages designed to hold the dead. Hearses are adapted from many different types of cars, including Mercedes-Benz, Cadillac, and so on.

In this guide, we’ll share everything you need to know about what a hearse is and how it holds coffins for a funeral. Whether you’re interested in the history behind hearses or you’re planning a funeral, this is important information to know about the funeral industry.

Definition of a Hearse 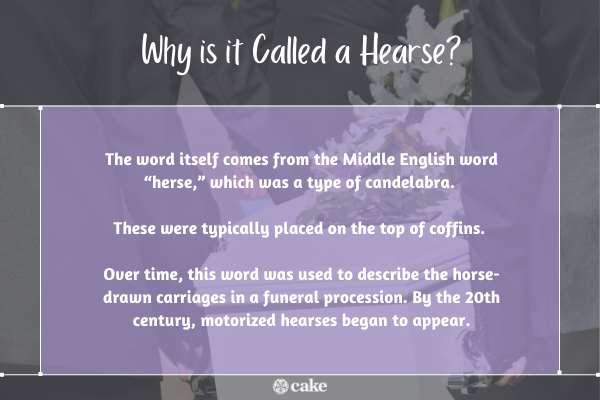 To begin, what even is a hearse? In modern times, it’s a car designed to transport a casket to and from its final resting place. They typically lead the funeral procession, and they’re followed by close friends and family in other funeral cars. Because caskets are large and bulky, they don’t fit in most traditional cars. Hearses are a longstanding tradition, and they’re a respectful way to honor the dead.

Why is it called a hearse?

Where did the hearse get its name? The word “hearse” is a bit unusual and hard to pronounce for some. According to funeral professionals, it’s actually commonly called a funeral coach. This term is more approachable, and it also relates to the role of this vehicle. Still, the term “hearse” has a strong place in the history of the English language.

The word itself comes from the Middle English word “herse,” which was a type of candelabra. These were typically placed on the top of coffins. Over time, this word was used to describe the horse-drawn carriages in a funeral procession. By the 20th century, motorized hearses began to appear. The first motors were actually electric, but these were too expensive for most funeral homes until the 1920s.

The sleek, limousine-style hearse was introduced in the 1930s, and it has remained popular through the modern day. Though this term came from the word for candelabras held over caskets, it’s since become a grim-sounding way to describe a funeral coach.

Drivers of a hearse are typically called hearse drivers. On occasion, they’re also called chauffeurs. The specific title depends on the funeral home, though many hearse drivers work under several funeral homes at once.

Hearse drivers have commercial driver’s licenses, and they’re experienced within their roles. There are many duties within this job that go beyond simply driving, making hearse drivers more than basic chauffeurs.

What Are the Main Duties of Hearses and Hearse Drivers?

With that in mind, what exactly do hearses do within funeral homes? What duties does the hearse driver have? Understanding these specific responsibilities is a good way to familiarize yourself with the entire funeral process.

First, the primary duty of a hearse is to transport the body to the funeral safely. Because coffins are large and heavy, they require a particular type of transportation. Hearses can only transport one casket at a time, which ensures everything stays safe and secure.

Not only is this a practical solution, but it’s also a sign of respect. The dead get a final, solo ride, followed by their close friends and family. The quiet, somber appearance of these hearses is a respectful sendoff that dates back generations.

The first duty of a hearse driver is to know and understand funeral procession etiquette. Typically, during a funeral procession, the hearse leads the family to the final burial site. Sometimes this includes a police escort.

It’s important for passing cars and onlookers to stop and wait for the funeral procession. An extensive knowledge of this etiquette is a necessity for any hearse driver.

Hearse transport is also common for military funerals. In this case, the hearse driver is versed in proper etiquette around military funerals. This might include flag folding, draping the flag over the casket, or special hearse decorations.

Because hearses are used again and again, often for decades, it’s normal to worry about their cleanliness. Though hearses often have a strong chemical smell, this is actually because of cleaning agents used between services.

Hearse drivers and funeral home staff go to great lengths to make sure the hearse is cleaned effectively. It’s incredibly safe and sanitary, so there’s no need to worry about cleanliness since this is a big part of the job.

Are There Different Types of Hearses? 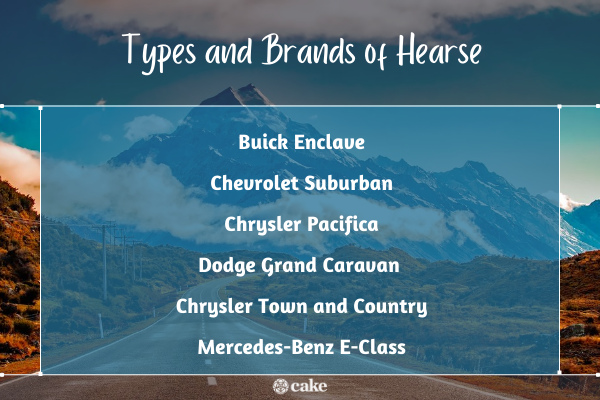 In general, most hearses are from luxury car manufacturers. These are expensive investment cars for funeral homes, and their quality reflects their level of service. The most common funeral vehicle is the Cadillac. The Cadillac XTS is often adapted as a hearse, and it’s one of the most frequently used models today. However, there are other big players on the hearse market like:

The specific vehicle is decided by the funeral home. As you can see, there are many options beyond the traditional Cadillac. All of these well-known models are adapted to fit the traditional hearse look.

How Much Does It Cost to Hire a Hearse and Hearse Driver for a Funeral?

With rising funeral costs across the nation, how much do a hearse and driver actually cost? This is a big part of the final sendoff for many families, but the price tag can often be a concern. Like other types of car rental services, your specific price depends on your location and market.

The average cost of a hearse and driver is around $300. This is in addition to other limo services to transport the family to the cemetery. It’s also common to tip after a funeral, so you might want to budget extra funds towards gratuity for your driver.

Do You Need to Have a Hearse for a Funeral?

Though hearses and funerals go hand-in-hand, do you need to have one at your funeral service? In short, the answer is no. There is no legal or ethical requirement to have a hearse transport the casket to the final resting place. That being said, you will need to have a plan for arranging transportation to the cemetery.

Some funeral homes have alternative transportation options, but these will likely also come at a fee. In some states, you’re allowed to transport the body yourself. It’s best to ask your funeral director about options in your state.

One way to keep the cost low is to hire a hearse and driver, but transport guests and family yourself. Asking close friends and family to drive themselves to the cemetery isn’t an unreasonable ask, and this saves you when it comes to renting a private car or limousine. 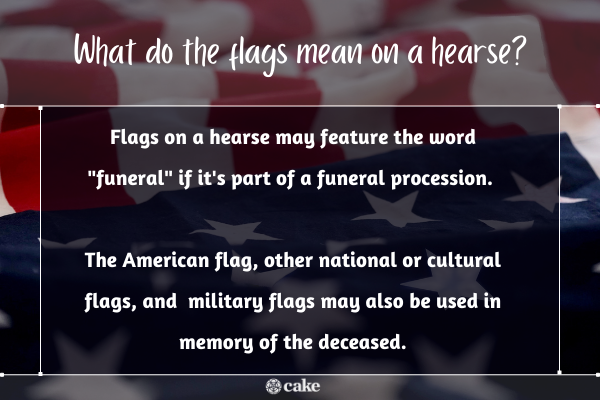 It’s normal to have questions about hearses and how they work. Here are some of the most frequently asked questions and their answers.

Can anyone drive a hearse?

Not just anyone can drive a hearse; you need a commercial driver’s license. This is a special type of driver’s license, so the average driver is not qualified. In addition, hearse drivers undergo specific training with the funeral home to ensure they’re prepared for the unique challenges of driving a hearse.

Who follows the hearse in a funeral procession?

The family traditionally follows the hearse in a funeral procession. The hearse leads the way, sometimes with a police escort. The family follows either in their own vehicles or a rented limousine. It is seen as disrespectful to overtake a hearse, whether you’re in the procession or driving nearby. In some states, this is also illegal.

What do the flags mean on a hearse?

Another common flag is the US flag, which is common for military funerals. You might see other types of flags used to honor someone’s military service, organization, or heritage. Hearses usually have special flag holders for these requests.

While hearses often have a grim connotation, they’re a functional part of modern funeral services. What started as horse-drawn carriages turned into unique, eye-catching vehicles today. Whether you’re planning a funeral service for a loved one or simply curious, it’s interesting to learn how these hearses and their drivers operate.

The funeral industry is a vast and varied place with a rich history. The more you understand the ins and outs, the more prepared you can be to embrace your own mortality. When you’re ready, consider starting your own end-of-life plan for free on Cake.