Did you know that Hinduism has many beliefs and traditions related to the death and dying process? Understanding how death and dying are connected to Hindu culture and religion can help you know what to expect when you attend a Hindu’s death traditions.

Hindu Beliefs About Death and Dying 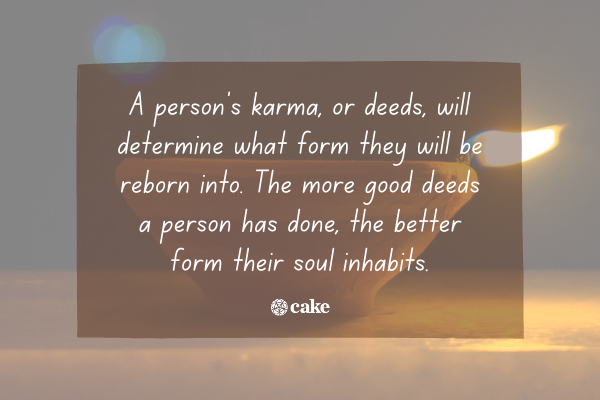 Like any religion, Hindus’ beliefs about death and dying are just as important as the way they live their lives. Unlike death in different cultures, however, a Hindu uniquely views death, not as something to mourn over, but something to view in an optimistic light.

Significance of death in Hinduism

In Hinduism, life and death are interwoven in one continuous cycle called samsara. Each person has a soul, known as the atman. Hindus believe that their atman leaves their body when they die to be reborn into another form.

Depending on a person’s specific beliefs, some Hindus believe that rebirth begins immediately after death. Others believe that the atman spends time in other realms before being reborn in another form.

A person’s karma, or deeds, will determine what form they will be reborn into. The more good deeds a person has done, the better form their soul inhabits. Hindus believe that a person’s atman, or soul, can be reborn as anything from another human to animals and insects.

Most believe that only the worst of people are punished through birth as an insect or lower life form. Rebirth as a human infers that your former life has been one of moral living and good deeds but you are not yet ready to ascend and become one with Brahman.

Becoming one with Brahman only happens when the soul has learned how to rise above the human condition and join with the supreme spirit. If it has not learned how to separate itself from human desires for their fulfillment, then the atman must be reborn into a new life so it can continue learning. This continuous journey is viewed as beneficial for the dying Hindu believer because death brings him that much closer to oneness with Brahman.

Do Hindus believe in heaven and hell?

Hindus believe in an afterlife but not in the same way that Christians, Jews, and Muslims do. According to Hindus, there are multiple worlds or realms a soul can go during their transition between death and their rebirth into the next life.

When people are righteous during their stay on Earth, they go to the upper worlds:

Patala is the lowest of the seven low worlds. This is the place where people who were evil during their lives on earth will spend time suffering. This place of suffering is similar to the way Catholics view purgatory.

The atman of an evil person will reside in Patala for what feels like an eternity until they have thoroughly paid for their deeds. After being cleansed in Patala, this person will enter again into a body. Unlike rebirth from the higher worlds, rebirth from Patala will not be the form of a human, but rather an animal or insect.

As you can see, Hindus do believe in distinct places where souls go while in transition between their former life and rebirth into the next. However, these places are not the same as the Judeo-Christian heaven and hell (or the "second death"). Both higher and lower worlds are viewed as physical places bound by time and space, not as a place to which souls go and remain forever.

Belief in ghosts and spirits

Hindus believe that, through reincarnation, a person’s soul returns to earth to inhabit another form, be it human or animal. Because of reincarnation, there’s not a level of belief in ghosts as in some western traditions. The soul always has somewhere to go, whether to the upper or lower worlds or to immediate rebirth.

If after-death rituals are not promptly carried out or are performed incorrectly, the soul is believed to wait for its release from the body. However, in Hinduism, people do not become ghosts and haunt loved ones left behind.

According to Hindu mythology, there is a ghost form called Bhut. Bhut are believed to be evil, restless ghosts, made to wander the earth due to a violent death or denial of funeral rites. These are believed to be rare, however, and few Hindus give them much thought.

Where Does the Soul Go After Death? 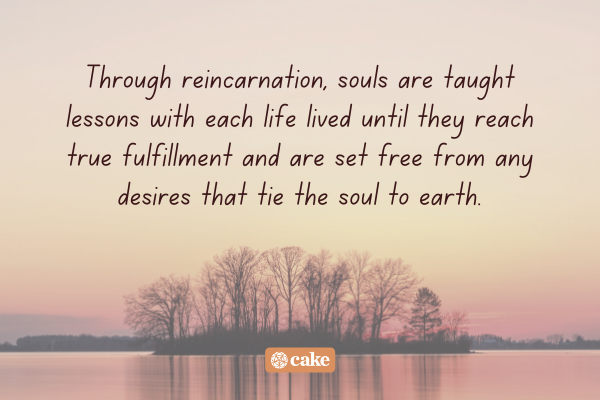 For Hindus, the concept of reincarnation is an essential part of their beliefs about what happens after death. Where a soul goes is seen as part of a continuing journey and a stage of rebirth from one life to the next.

For Hindus, reincarnation is part of the lifecycle of all souls as they seek to achieve oneness with the supreme spirit, Brahman. Depending on the good or bad deeds people accomplished during their life on earth, they will be reborn or reincarnated as another human, an animal, or an insect.

Reincarnation exists for the sole purpose of helping the soul achieve the understanding that no desire on earth will fulfill their deepest longings. Through reincarnation, souls are taught lessons with each life lived until they reach true fulfillment and are set free from any desires that tie the soul to earth.

If you are interested in learning more about reincarnation in general, discover our list of 16 books on reincarnation.

The ultimate form of enlightenment and achievement is to become one with the supreme spirit and return to an eternity of peace and rest.

How Do Hindus Honor and Remember the Dead? 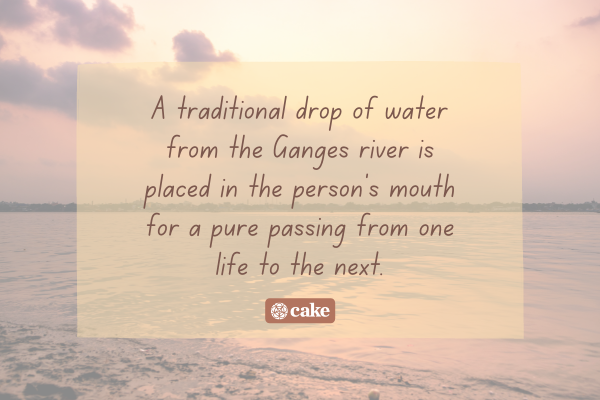 Remembering and honoring the dead is an important part of Hindu life. There are numerous traditions, including two of the most prominent: Gai Jatra and Pitru Paksha.

During the Gai Jatra festival, the entire country of Nepal shuts down for a multi-day celebration in honor of the dead. Any family who had a member pass away joins in a large parade that begins the entire festival on day one. Gai Jatra celebrates the remembrance of loved ones and celebrates new life and rebirth, a key part of Hindu belief.

While Gai Jatra is a joyous and happy time, Pitru Paksha is a time for mourning and paying respect to the deceased through acts of worship. During this season, there are no happy celebrations such as weddings, giving gifts, or starting businesses. Many Hindus remember their dead by fasting, donating to the priests, and performing traditional acts of ancestor worship.

Hindus experience traditions, including chants, when a person is near death. A traditional drop of water from the Ganges river is placed in the person’s mouth for a pure passing from one life to the next. After death, the body will traditionally stay with the family until cremation.

When attending a Hindu funeral, it’s important to remember that funerals are seen as happy occasions, not mournful times. According to tradition at Hindu funerals, white or light colors are worn, scripture is recited, and flowers are a welcome gift for the family of the deceased.

For a Hindu, Death Means Transition

For Hindus, death is not the end, but merely a transition from one life to the next. Death is looked at optimistically instead of mourned as a complete loss. For a Hindu, death brings rebirth and the highest achievement of oneness with Brahman.