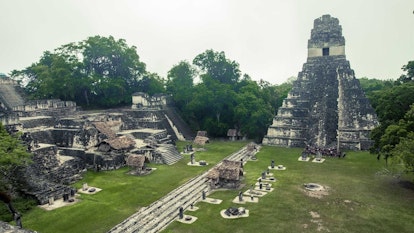 Though most people are familiar with traditional burials when laying loved ones to rest, cremation is actually one of the oldest ways to handle the dead. People across human history have used cremation as a way to honor their loved ones in death, and if you study the history of cremation, you'll notice that it’s developed in many ways since ancient times.

There’s a lot of confusion nowadays not only on how cremation works, but also on how it came to be. Cremation is the process of reducing a corpse to ashes and other essential elements by burning. The family then has the option to store the ashes in an urn or another memento. Scattering ashes is also common.

How did cremation come to be? How did it differ in other cultures, and how did it develop into the funeral practice we know today? In this guide, we’ll share a quick history of cremation.

Tip: If you're looking for something very unique to hold a loved ones ashes (think a game, a classic car, or instrument of choice), you can custom order an urn from a store like Foreverence. You submit a design idea or sketch, then the company designs and 3D prints your urn, so you get a 100% unique container.

Another unique option is transforming your loved one's ashes into cremation stones with Eterneva or into a brilliant diamond with Parting Stone.

History of Cremation in the United States

You might be surprised to learn that cremation is actually chosen over traditional burials in the United States. In 2016, just over half of Americans chose cremation over a burial. This is rising rapidly, and it’s likely due to the high cost of burial and environmental concerns. While cremation is accepted and mainstream today, this wasn’t always the case.

In early American history, cremation was something that was met with hostility, especially from the church. Modern cremation practices didn’t begin until Dr. Francis Julius LeMoyne opened the first crematorium in a small Pennsylvania town. In 1855, he slowed down his medical practice to pursue one of his strongest interests: how to handle the bodies of the dead.

During this time in American history, embalming was increasingly common. This was because it allowed the bodies of soldiers killed in the Civil War to be returned home to their families. Dr. LeMoyne suspected that this process of embalming had a negative effect on his community, leading to the failing health of his neighbors.

Though he faced backlash, Dr. LeMoyne erected his own crematory on his own land. He created his own oven in which the flames never touch the body. The first cremation took place in 1876. Dr. LeMoyne offered this service free-of-charge to entice others to consider this new option. People crowded around the structure to witness this historic event.

Though it would take decades for Dr. LeMoyne’s cremation to become more mainstream, he did permanently affect the funeral industry in the United States. Other cremation societies emerged in the late 1800s, and these only grew throughout the early 20th century.

Today, Dr. LeMoyne’s words are still used in the argument for and against cremation. His bold steps outside of society’s boundaries had an undeniable effect on the funeral industry. Though crematoriums are more modern and technically advanced today, they still rely on some of Dr. LeMoyne’s designs.

History of Cremation in Africa

Cremation is a controversial issue in modern-day Africa. Because today’s Africa is a mix of so many outside cultures, new beliefs are regularly introduced. Cremation is more accepted than it’s ever been, but that doesn’t mean it’s free from the same complex origin as other parts of the world.

Perception of death in Africa

To understand the role of cremation, you’ll need to understand how death is viewed in most parts of Africa. It’s important to recognize that Africa is a diverse continent. There is no single truth that’s universal for every specific country or area, but these are overarching belief systems.

In many African cultures, it’s believed that when people die, they go to meet the ancestors who died before them. The body of the deceased needs to be respected with a burial. Without this, they won’t arrive “whole.” Cremation is seen as disrespectful and un-African based on these long-held beliefs.

In recent years, there has been a push for more cremations. While much of Africa adheres to the Christian belief that the dead are to be buried, this simply isn’t always practical. Many cities are growing rapidly in population, and there isn’t enough space for all the dead.

Additionally, outside cultures, particularly Hinduism, are affecting the popularity of this choice. Hindus traditionally believe in cremation, and the rising population of Hindus is breaking the taboos around this option. Though far from mainstream in most African cities, the tides of change are coming.

History of Cremation in the Americas (Pre-Colonization)

Before colonization (and Dr. LeMoyne’s crematory), was cremation a common choice in the Americas? Pre-colonization America was a diverse place. Home to tribes native people from the north to the south, each area had its own use for cremation.

Native American tribes across the modern-day United States varied widely in their treatment of the dead. Today’s research sheds light on how these people paid respects to the deceased, and some fascinating evidence shows that cremations did happen.

While most Native tribes rarely buried their dead, they had very specific ways of cremation that differ from the processes used today. Early natives likely used cremation pits to burn the bodies of the dead. In the southern states, researches found artifacts and bones from these special burial pits.

Though it’s hard to understand the motivations behind these early cremation sites that existed thousands of years ago, it does show that pre-colonial natives used cremation occasionally for their dead. Interestingly, the bodies appear to have been moved elsewhere after the cremation. This shows care was given to the dead, similar to what we see today.

Before colonization, the native tribes of Central and South America had their own unique burial rites. While these differed across groups, burial was the most common practice.

For the Aztecs, being of noble birth meant you were more likely to receive a cremation upon your death. Cremation was a sign of social status for these ancient people. The elite members of society were cremated with tools of their trade and other finery. Once the cremation took place, the body’s ashes were collected in a vase and buried at home.

Cremation wasn’t common in other parts of Central and South America because wood wasn’t very common. In addition, the deceased was believed to need their body in their afterlife. Like other parts of the world, the funeral practices tie into the local beliefs.

History of Cremation in Asia

In parts of Asia, cremation was the common practice when it came to handling the deceased. Unlike other parts of the world, the same taboos around cremations vs. burials didn’t hold people back from choosing this option. Even today, cremation is still very common amongst many Asian cultures.

In China and Korea, cremation became a popular choice under Buddhist influence. People in China cremated bodies as early as 8000 B.C. This is actually the practice that sparked the adoption of cremation in part of Europe like ancient Greece.

During this time in China, cremation was also the most practical option. Widespread war and political problems made this an easier choice than burials, which were costly and required a lot of space. However, with the introduction of Neo-Confucianism in the 14th century, cremations became stigmatized.

Cremation plays a large role in the funeral traditions across South Asia. In India, Hindus believe cremation is the best way to encourage the reincarnation of the soul. As the world’s oldest religion, Hindus place very little value on the body. This is seen as nothing but a prison for the soul. By cremating the body during a Hindu funeral, the soul is free.

Hindus have used cremation since the early days of the religion. Traditionally, the body was to be cremated along the Ganges River as a way to purify the soul. However, this is no longer the case, as many Hindus are spread across the globe. Today, Hindu practices still focus on cremation as the primary way to treat the bodies of the dead.

Is Cremation Right for You?

As you can see from this long history above, cremation traveled a long way to get to where it is today. In the United States, for example, it went from being a taboo subject that went against the church to the most common option for the deceased in modern times.

Nowadays, there are more options for cremations than ever before. People can choose pet cremation for their furry friends or to have their ashes scattered in a cremation garden. You can even have a memorial diamond created from ashes with a company like Eterneva. Ultimately, the choice is yours when it comes to your end-of-life wishes. Now that you know the complex history of cremation, you’re ready to make the right choice for you.