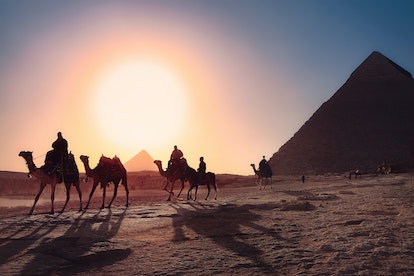 Embalming is the process of preserving the human body. It’s a way to slow down the decomposition process, often achieving a lifelike appearance for the body. In North America, embalming is the norm when it comes to modern burials.

But how long has embalming been a practice, and where did it get its start? Is it legally required to embalm bodies, and does it serve an important purpose? In reality, embalming has a strong place within the history of humanity. While many only think of embalming in relation to modern practices, it dates back much further than you might think.

Let’s take a peek into this unconventional history lesson. In this guide, we’ll give a quick overview of the history of embalming, the embalming process, and the cultural significance of this funerary practice. The best way to understand where to go in the future is by looking to the past—even when talking about death.

How and When Did Embalming Start?

While the Ancient Egyptians are the ones usually seen as the first embalmers, this is actually untrue. The earliest practices of embalming or basic human preservation actually are found in Ancient Chile and Peru. Archeologists have found the earliest forms of man-made preservation of the body in an area known as the Atacama Desert, home to the Chinchorro people.

Why was this area the earliest? It has to do with both climate and culture. First, the hot and dry desert climate was the ideal place for accidental preservation to naturally occur after bodies were buried in the sand. Second, this process is thought to have developed as a special death ritual to honor the dead.

Between 5000 and 3000 BC, the Chinchorro people developed an embalming process known to historians as “black mummy.” It earns this name from the black appearance of the skin after thousands of years.

This process was when the limbs and flesh were fully removed, and the body was heated and dried. The body was filled with animal hair and clay to keep its natural shape, and it was re-assembled.

Between 2500 and 2000 BC, the Chinchorro people developed the “red mummy” preservation technique. During this time, organs were removed through small incisions. Again, the body was dried and filled with natural materials. Finally, the body was painted in red ochre and topped with a clay hat and a wig of human hair.

Though the Egyptians developed similar techniques for embalming, it’s important to realize that the Chinchorro people began mummification 2000 years earlier.

Who was the first person to be embalmed?

The Chinochorro people continued to embalm bodies for thousands of years, but they weren’t the only civilization to develop these skills of preservation. The first Egyptian mummies are assumed to be from about 2600 BC. The oldest Egyptian mummy is a woman preserved in a sarcophagus, and she likely is named Thuya.

» MORE: What do you need to do in the days and weeks following a death? Get the full checklist.

Ancient Egypt: The Framework for Embalming

The most well-known and highly studied example of embalming is by far Ancient Egypt. Though many other cultures had similar processes, it was likely more successful in Egypt thanks to the warm, dry climate.

How did embalming work in Ancient Egypt? It was a very intricate process, and it was one handled by skilled priests. There were also 3 main types of embalming, the most expensive types reserved for the wealthy, elite, and royal. However, even lower-income families could usually afford moderate or inexpensive embalming for loved ones.

First, the body was washed in a compound made with salt and baking soda. This helped dry the skin. For more costly, intricate mummifications, the organs were removed. This always starts with the brain, then the priest moved down the body.

The only organ left intact was the heart. This was where Egyptians believed intelligence and feeling took place (like our brains today), and it was needed in the afterlife.

For the wealthy, the removed organs were removed, washed, and dried before being placed in canopic jars. These jars were buried or entombed with the body. Last but not least, the body would be covered in salt and lie until it’s completely dried out. This would take up to 70 days.

The body was ultimately wrapped in linen, and a death mask was placed over the face. This could be made of plaster or even jewels, depending on the status of the citizen.

The Ancient Egyptians were believed to have mummified over 70 million mummies throughout their civilization. This was the normal practice until the rise of Christianity.

How Has Embalming Changed Over Time?

Over time, many scientists, researchers, and even artists worked to perfect the process of embalming. With scientific improvements in medicine in the Middle Ages and Renaissance, early attempts at modern embalming were made.

The 19th century is when there were the most advancements in the process of embalming. During this time, it was popular to get buried in far-off locations, and families were more likely to be separated by distance. Without preserving the body, it simply wasn’t practical to transport the body a far distance.

These early practices in the 19th century weren’t perfect. The primary concern was the use of embalming fluids with arsenic. Though this was effective, many were worried it would seep toxic chemicals into the groundwater. Luckily, German chemist August Wilhelm von Hofmann discovered formaldehyde which worked in the same way without so much danger.

Today, embalming is still the “norm” after death. While some cultures are against embalming, most modern burials include some element of embalming. The process is usually done to make the body look better for viewing at the funeral.

Today, embalming is done by arterial injections. This is when a chemical mixture (including formaldehyde) is injected into the bloodstream while the blood is drained from the body. This keeps the body looking lifelike, and it also slows down the decay process. It’s important to recognize that embalming does not halt decomposition, it just slows the clock.

In addition to chemical preservation, makeup is usually applied to the skin. Depending on the cost of embalming, other preservation techniques might be used like facial reconstruction, hair styling, etc. Some cultures even experiment in what’s known as extreme embalming in which the body is standing upright or existing in a human-like position.

While embalming is likely to be the norm for a while, there is a push for more eco-friendly, inexpensive solutions. Green burials are increasingly common, and these encourage the body to be laid to rest without any chemical intervention.

Embalming has been a large part of human history since ancient times. Though it began as a way to ensure the soul returns to its body in the afterlife, it’s since become the norm to preserve a lifelike state for sentimental reasons.

Thinking about a loved one’s body fading away on the earth is difficult. Embalming brings peace to many knowing that those they love are preserved where they rest.

Though times are changing, there’s a lot to learn about our perceptions about death and dying through embalming. Not only has this led to countless medical improvements, but it also reveals something important about humanity throughout history.

Ultimately, embalming holds a mirror to our fear of death, reminding us that nobody wants to return completely to the earth. Thanks to the ancient civilizations and the Civil War, we don’t have to.