While much of the world prepares to celebrate Halloween on October 31, residents of the Isle of Man get ready for Hop-tu-Naa. The two holidays occur on the same date, and they share many similar traditions. But Hop-tu-Naa and Halloween are two separate and unconnected celebrations.

Whether visiting the Isle of Man for Hop-tu-Naa is on your bucket list, or you’re interested in holidays that are similar to Samhain and Halloween, you might like to learn about this unique holiday. Below, we’ll explore some examples of rituals related to Hop-tu-Naa, and the history of the holiday and its origins.

What Is Hop-tu-Naa Festival?

Hop-tu-Naa is the oldest existing tradition from the Isle of Man. Historically, Hop-tu-Naa was considered a celebration of the Celtic New Year. It marked the end of the summer season and the coming of winter. Modern-day celebrations of Hop-tu-Naa are considered the Manx equivalent of Halloween.

The Celtic festival of Hop-tu-Naa predates Halloween. It’s the celebration of what was originally considered New Year’s Eve, or Oie Houney.

In ancient times, the Manx people of the Isle of Man would celebrate the harvest season on Hop-tu-Naa. The Manx people would give thanks for the preparations they’d secured and set aside for the long winter ahead.

The name Hop-tu-Naa derives from the Manx Gaelic term, Shoh ta’n Oie, which means, “This is the night.” Some sources also suggest the name Hop-tu-Naa is related to the Scottish New Year’s celebration of Hogmanay.

Hop-tu-Naa is primarily celebrated on the Isle of Man. The island, also known in Manx as Ellan Vannin or as the Isle of Mann, is a self-governing dependency of Britain. It’s located between Great Brittain and Ireland, in the Irish Sea.

The Manx people are a unique ethnic group, often described as Celtic based on their language. Their origins, though, include both Norse and English lines.

Hop-tu-Naa is the oldest continually observed holiday that originates from, and still exists on, the Isle of Man.

When Is Hop-tu-Naa Festival Celebrated?

Hop-tu-Naa is celebrated on October 31 every year. It’s a harvest festival that marks the end of one season (summer) and the beginning of the next (winter). Because it falls on October 31, many people assume that Hop-tu-Naa is just another name for Halloween.  But Hop-tu-Naa is its own original festival. Its traditions, including singing and dancing, carving turnips, and baking bread, all stem from the Celtic celebration of a bountiful harvest.

Hop-tu-Naa originally marked New Year’s Eve according to the ancient Celtic calendar. As the date of celebration for New Year’s Eve changed from October 31 to December 31, some of the traditions of Hop-tu-Naa transferred over, too.

For example, many New Year’s Eve traditions on the Isle of Man and in nearby European countries still imitate harvest festivities, even though New Year’s Eve is well into wintertime.

What’s the Hop-tu-Naa Song and Dance?

One of the key traditions of Hop-tu-Naa is a song and dance known as the Hollantide. Anthropologists and cultural researchers believe that historically, couples danced a specific routine through the streets on October 31, carrying their turnip lanterns.

The Hollantide dance is a simple procession for dancing pairs. It involves a dance step called the Manx Reel Step, as well as the formation of arches by the couples holding hands.

While there are multiple variations of the tune, one version of the lyrics is as follows:

The Hop-tu-Naa or Hollantide song and dance are still taught to, and performed by, Manx school children today. 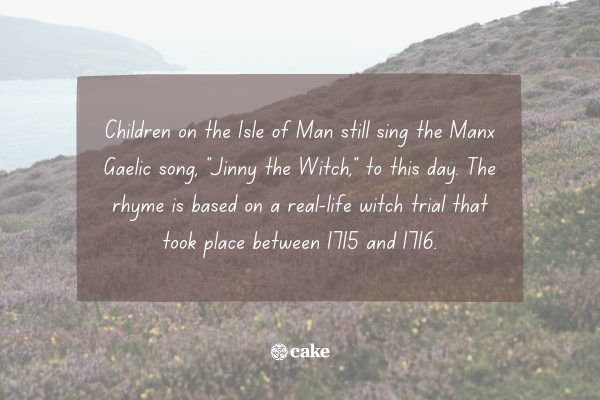 Although Hop-tu-Naa shares some traditions and symbolism with other October 31 holidays like Halloween, it also has its own unique rituals. Here are some of the traditions that you can observe to celebrate Hop-tu-Naa.

As with carved pumpkins, it’s customary to place a candle in your carved turnip to illuminate the design and create a unique lantern.

Similar to the Halloween tradition of trick-or-treating, children historically went door-to-door on Hop-tu-Naa. But instead of receiving candy and sweet treats, children could expect donations of bread, potatoes, and herring.

They’d often carry lit turnips to illuminate their way, and they would sing rhyming songs in exchange for a reward. If a house refused to dispense treats, children would batter the front door with turnip stumps they brought along with them.

Children on the Isle of Man still sing the Manx Gaelic song, “Jinny the Witch,” to this day. The rhyme is based on a real-life witch trial that took place between 1715 and 1716. The accused “witch” was a Manx woman named Joney Lowney.

Some of the lyrics for the tune “Jinny the Witch” are as follows:

Reports state that “Jinny the Witch” was accused of halting the production of corn at her local mill, as well as obtaining fish by mysterious means. She apparently received a sentence of 14 days in prison for her alleged crimes of witchcraft and died in 1725.

Another key tradition related to Hop-tu-Naa is the ritual of divination, or fortune-telling. The ancient holiday was a time for predicting the future, as well as the weather. One such divination ritual involved smoothing ashes over the hearth at the very end of the night.

If, the next morning, a footprint appeared in the ashes facing towards the door, someone in the house would die soon. If the footprint faced inwards, away from the front door, someone would give birth in the coming year.

Another divination tradition called for a Soddag Valloo, or “Dumb Cake.” It was so named because it had to be baked and eaten in complete silence. Women and girls baked the cake on the red-hot embers of the hearth, mixing soot into the batter.

They then divided up the cake and ate it in silence, and walked backwards to their beds for the night. If they completed the ritual correctly, they could expect their future husbands to appear in their dreams.

Another Hop-tu-Naa tradition you’ll find familiar is the ritual of dressing up. Children put on costumes—sometimes ghoulish and sometimes fantastical—and go from house to house requesting treats as described above. Much of this tradition is thought to be influenced by the modern holiday of Halloween.

Hop-tu-Naa originally celebrated New Year’s eve, which took place in October in ancient times. Therefore, many of the traditions that originally accompanied the date of October 31 transferred over the modern New Year’s Eve holiday on December 31.

If you’re visiting the Isle of Man at the end of October, you can expect to observe or take part in the traditions described above. But you might also see those rituals taking place at the end of December in nearby nations.