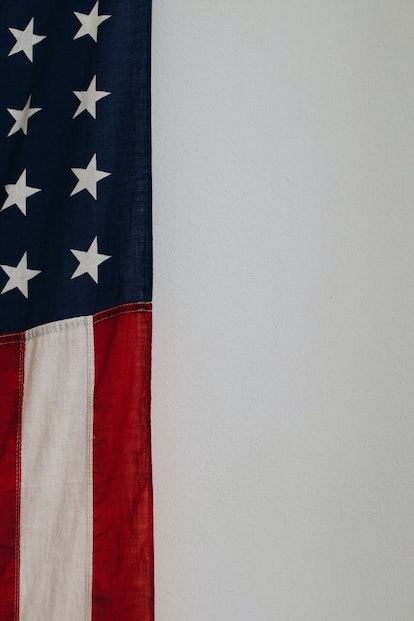 If you want to honor a fallen hero, placing a flag on a veteran’s grave is a great place to start.

You might have known a departed veteran personally, as a family member or friend. Or perhaps you just want to say “thank you” to someone who served your country.

Either way, placing a flag on a veteran’s grave is a respectful and thoughtful gesture. It’s a simple action that goes a long way in demonstrating your support for veterans, both living and deceased.

If you want to place a flag on a veteran’s grave, though, it’s important to make sure you do so correctly. Below, we’ll help you understand the etiquette and protocol for honoring veterans with gravesite flags.

1. Know When to Place a Flag on a Veteran’s Grave

To properly honor the United States Flag Code (which we’ll discuss more later on), you should avoid using the American flag as gravesite decoration year-round. This is especially true when it comes to cemetery flags, which can easily become dirty and tattered by inclement weather.

Exceptions to the Flag Rule (like allowing the flag to be placed near the ground where it could get dirty and displaying the flag throughout the night without proper lighting) exist only on certain holidays.

Those holidays are the dates you should consider placing a flag on a veteran’s grave. They include:

The most popular flag-placing dates are Memorial Day through Flag Day and Veterans Day.

» MORE: Taking steps after a loved one's death is a final act of kindness. Here's your complete checklist.

2. Check In With Groups in Your Area

If Memorial Day or Veterans Day is approaching, a group in your area might be planning a flag-placing event. Local member groups who coordinate flag placement on national holidays include:

If you have a loved one who’s buried in a military cemetery, call and speak to the cemetery’s administrative office. Ask them about any flag ceremonies that are taking place and how you can take part or attend.

Some larger military cemeteries have monument commissions to handle the placing of flags on special holidays. They sometimes also hold flag ceremonies, similar to a military funeral.

Smaller military cemeteries often allow Boy Scout and Girl Scout troops to help with flag placement, instead. Either way, you’ll want to know whether anyone is already in charge of placing flags at that cemetery.

Now let’s get into the Flag Code previously mentioned. The U.S. Flag Code is a federal law. It was drafted on Flag Day in 1923 and distributed nationwide by the American Legion.

Even though it’s technically a Federal Law, it isn’t enforced on a national level. Several parts of the Flag Code have even been ruled unconstitutional. For example, the Code prohibits desecrating an American flag in any way. And a Supreme Court ruling found that this goes against the First Amendment right to free speech.

Because of this and other Supreme Court rulings, the Code is generally considered unenforceable. In short, that means you likely won’t get fined or penalized for breaking the Flag Code. But the Code is still considered proper etiquette for handling and acting around a flag.

If you want to treat the American flag with dignity and respect as recommended by the Flag Code, here are some rules to follow:

These are just a few of the many etiquette rules set forth in the U.S. Flag Rule. But when you’re placing a flag on a veteran’s grave and celebrating Memorial Day or Veteran’s Day these are the points to keep in mind.

Tip: If your loved one is cremated instead of buried, you can create a custom, patriot urn with Foreverence. This is a great way to show respect for a loved one's service.

The correct placement of an American flag at a veteran’s grave is one foot in front of the headstone, in the center.

While that might seem fairly straightforward, placing a flag or flags at the gravesite will differ based on the type of cemetery and grave. Below are some different scenarios to consider.

Any time you intend to plant a flag directly in the ground, as opposed to in a flag holder, it’s important to check with the cemetery director first. They can interfere with the cemetery’s regular maintenance and cause other problems.

In addition to an American flag, you can bring flowers to decorate a veteran’s grave. You might want to do so, especially if the veteran was a loved one. If you’re not sure what type of flowers to bring, you might want to consider the different types of military funeral flowers.

It’s best to avoid leaving other graveside decorations, like stuffed animals, stakes and streamers, and anything made of plastic. These items can easily come apart or get stuck in the ground and cause problems for the groundskeepers, as well as distracting other mourners.

After the holiday has passed, it’s your responsibility to remove any flags you place on veterans’ graves, and to help other members of the community remove their flags.

According to the Flag Code, an American Flag can’t be displayed at night unless it’s properly illuminated. But the Cemetery Administration makes an exception for gravesite flags on holidays like Memorial Day and Veteran’s Day. For example, flags can usually be placed three days prior to the holiday and remain for up to one week afterward.

Make sure you check with the cemetery director or volunteer group to determine when you’ll be placing and removing the flags.

8. Safely Store or Retire Your Flags

In keeping with the U.S. Flag Code, it’s important to store flags safely when they’re not in use. As you collect your flags, examine them for damage and stains. Place the flags that are in good condition into a dry and secure storage box for next year.

If you discover any flags that are tattered or damaged, set them aside in a separate box. Don’t throw them in the trash, as this is against the Flag Code and considered disrespectful to the flag.

Instead, contact your local American Legion post to inquire about flag retirement. Most chapters have annual retiring ceremonies where they properly dispose of damaged American flags. Boy Scout and Girl Scout troops,

Nationwide, the family members of veterans, military personnel, and ordinary citizens work together to honor veterans on special days like Memorial Day and Veterans Day.

You can honor veterans on special dates like Memorial Day by visiting national monuments like Arlington National Cemetery. But you can also take part in the national tradition of remembering veterans by placing a flag in your own home town.

If you're looking for more ways to honor veterans, read our guides on Veteran's Day gift ideas and how to honor veterans. Also, consider unique memorial options like memorial diamonds from Eterneva or even a memorial tattoo. There are no limits to how you honor those you love.