When you start end-of-life planning, there are a lot of things to consider. Burial practices alone involve a few different decisions. Do you want to be buried or cremated? Are you interested in green burial options? Would you like friends to attend a funeral or would you prefer a more uplifting celebration of life ceremony?

To make the choices that work best for you, it’s helpful to know as much as possible about all options.

For centuries, people have been opting to be buried in cemeteries and graveyards. But while a grave is often referred to as a final resting place, that’s not necessarily the case.

Given how much a cemetery plot costs, you might think you’re purchasing it forever. But some cemetery plots do have an ownership expiration date. Here, we delve into some of the details surrounding cemetery plot ownership. 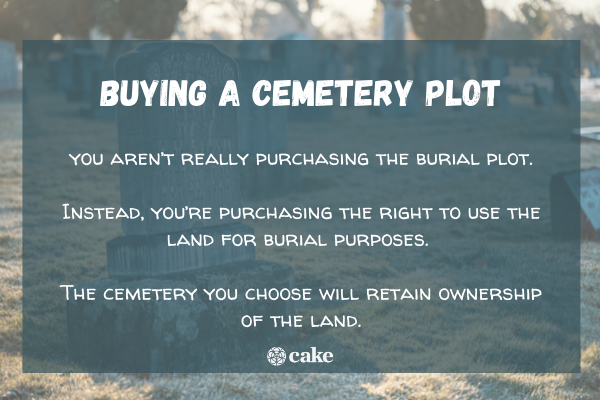 The average cost of a funeral in the United States is $11,000. A big part of that expense comes from the cemetery plot purchase.

The average cost of a burial in a public cemetery can range from $200 to $2,000. In private cemeteries, plots can cost from $2,000 to $5,000. In urban areas with large populations and limited burial spaces, burial plot costs can be as much as $25,000. And that’s for a single plot! This doesn’t include fees for additional elements like grave liners or grave markers. You can read more about public vs. private cemeteries here.

You might think this kind of investment will stay protected forever, especially when you consider the initial cost of purchasing a plot. But while purchasing a cemetery plot can feel like buying real estate, there are some differences.

The main distinction is that you aren’t really purchasing the burial plot. Instead, you’re purchasing the right to use the land for burial purposes. The cemetery you choose will retain ownership of the land.

The laws regulating cemetery lots are akin to contract law. It’s the difference between having an easement instead of actual ownership of the land.

Depending on where in the United States you live the rules may differ. The cemetery may include language in their contract that allows them to reclaim a burial plot after a certain period. It’s always important to do your research and find out the policies for the cemetery you are interested in.

Can Anything Happen to a Grave After Decades or A Century? 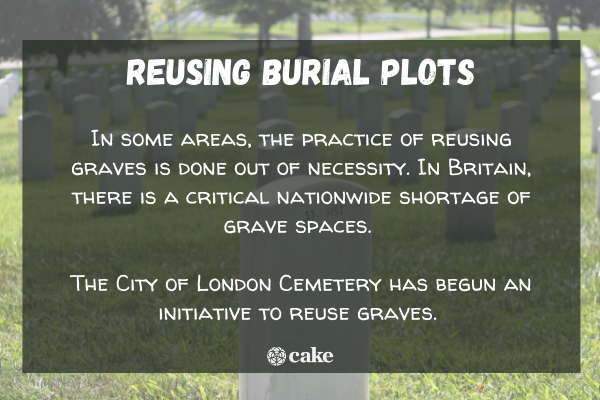 So why is it so complicated to answer the question of whether graves expire? There are multiple issues at play. First, cemeteries tend to be regulated by the state. So the laws will differ on a state by state basis. This means you need to familiarize yourself with the regulations of the cemetery where you decide to buy a lot.

Beyond that, private and public cemeteries often have different policies. For example, cemeteries attached to churches often have limited space. Over time, a church cemetery may be filled up.

Allowing plots to expire could free up space for people to be interred there in the future. But some probate cemeteries have protectorate capabilities, do a plot there will be yours for longer.

So what happens when a cemetery gets full? In some cases, the cemetery is simply closed to more burials. In national cemeteries, where veterans are interred after death, sites close when they are full. In other cases, people make use of gravesites a second time.

Depending on the jurisdiction, laws may allow burial of a second body on top of a body that has already been interred. Typically, that decision would live with the family that owns the cemetery plot. A graveyard usually can’t resell the plot to someone unrelated to the first person buried there.

Cemetery reuse due to shortage of space

In some areas, the practice of reusing graves is done out of necessity. In Britain, there is a critical nationwide shortage of grave spaces.

The City of London Cemetery has begun an initiative to reuse graves. Graves meeting certain criteria were made deeper so that existing remains could be reburied deeper into the ground. Then, a second body was buried in the grave as well.

The original headstones remain in place. But, a new inscription for the second body was etched onto the other side of the headstone.

Over 780,000 people had been buried in the City of London Cemetery in the past 160 years, and it was running out of room. This initiative allowed the cemetery to accept new bodies for burial while being respectful of the bodies already there.

The criteria for the grave selection process was as follows:

There have been some objections to initiatives like the one at the City of London Cemetery. But the need for sustainable burial practices is growing. If handled with sensitivity and care these practices can become the norm.

Cemetery reuse due to development

As many as 50,000 old graves were affected by the building of the HS2 rail line in London. These graves needed to be moved to allow construction to the rail to continue. This move was not as well-received as the City of London Cemetery initiative.

These kinds of moves aren’t limited to Britain. In 2012, an entire cemetery was relocated to make way for a new runway at Chicago’s O’Hare airport. Nearly 15,000 graves — some as many as 160 years old — were relocated. Families of the deceased fought this decision all the way to the Illinois Supreme Court.

Retailer Walmart has also come under fire for decades for relocating and destroying gravesites. This includes the graves of both indigenous people and slaves.

Unfortunately, there may be no way to guarantee a gravesite will remain undisturbed forever. You can look up local ordinances and find cemeteries that allow graves to be held in perpetuity. But over decades and centuries, the world around us changes. And so do laws and finances. Even the best-laid plans can go awry after enough time has passed.

Instead of trying to ensure a cemetery will remain untouched forever, we should reexamine burial practices. While doubling people up in graves may temporarily help with overcrowding, it’s only a stopgap. A shift in the funeral industry will help, but is slow to come.

Putting focus on cremation and green burial practices may be the only real way to prevent grave relocation down the line. You can help this change happen by exploring alternatives to traditional burial, and letting your family know your preference. Planning ahead allows your time to share your choice with your family and friends. And gives your time to make the choice that works best for you, and the earth.

If you're looking for more burial planning advice, read our guides on purchasing an affordable headstone and all about green cemeteries.