However, defining specific generations is a bit of a challenge. Not only are researchers torn, but there’s a lot of disagreement about when to start or stop a new generation. Again, it usually comes down to shared experiences.

Like a family tree, generations share things in common amongst themselves based on things out of their control (birth year). In this guide, we’ll break down the definition of a generation and determine just how long one lasts. 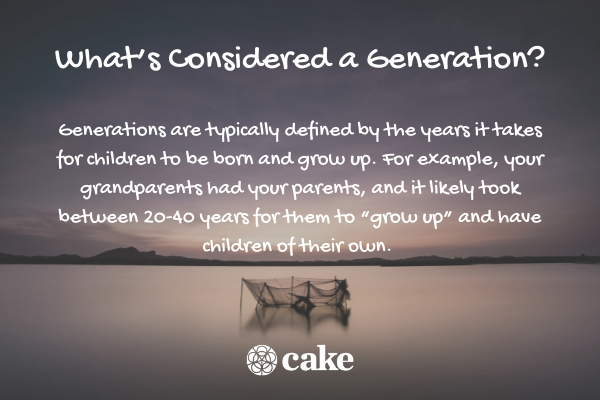 There are different ways to look at the term “generation.” It’s a way to describe family ties in things like genealogy books, and it’s also a sociology term for understanding groups of people.

When most people refer to a generation within a society, they’re talking about a collective group of people born at a similar time.

Families have many generations. A generation in terms of kinship is a way to describe the parent-child relationship. That means you’re in the same family generation as your siblings and cousins, whereas your parents are the generation before you and so on. If you have children of your own, they’ll belong to the next generation.

Similar to the sociological context, a generation refers to people born around a similar time. Most families work in this way, with people having children (or grandchildren) around the same time. While there is no one-size-fits-all, this is true for most families.

Generations are typically defined by the years it takes for children to be born and grow up. For example, your grandparents had your parents, and it likely took between 20-40 years for them to “grow up” and have children of their own. This time frame is usually the way to define generations within families.

In sociology, researchers look at generations a bit differently. According to the dictionary, this term refers to “a group of individuals born and living contemporaneously.” What this means is these are people who were born around the same time, and they experience similar things as they age.

In specific countries, researchers have a particular interest in generations. By looking at generations and defining them, it’s easy to see differences across different demographics.

Different experiences also affect generations in unique ways. For example, a war, recession, or technological change might have a huge impact on a specific generation.

Today, there are four main generations researched socially: Baby Boomers, Generation X (Gen X), Millennials, and Generation Z (Zoomers). Sociologists aggressively study the differences between these generations to come to pretty large conclusions, and there’s a lot we can learn about our collective experiences.

How Long is a Generation? 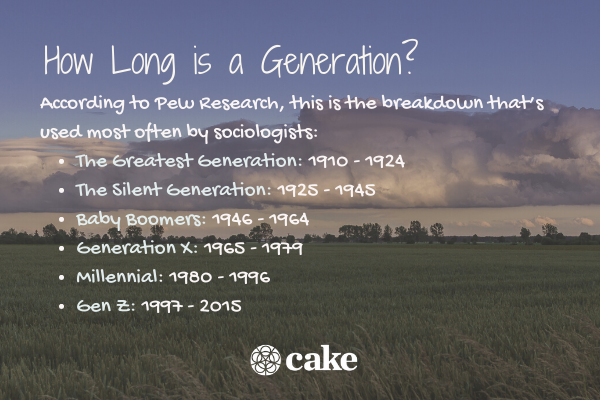 If you ask anyone what generation they’re in, you might not always get a straightforward answer. Researchers have long disagreed about specifically how long a generation lasts. At its base level, it lasts as long as it takes for someone to be born, grow, and have children of their own. However, this isn’t a simple number to estimate.

In addition, other factors impact the way a generation develops. Big changes to society might end a generation prematurely or even extend its life. The biggest example of this would be the technology boom in the 1990s. For children born in the mid-90s, it’s hard to define exactly when one generation begins and other ends.

Most research centers agree a generation is anywhere between 20 and 30 years. Recently, there’s been a lot of disagreement over the start and end of the Millennial generation. It’s been useful for leaders to look at the specific events defining this generation.

For instance, a Millennial typically remembers things like the rise of smartphones, the September 11 terrorist attacks, and the 2008 recession.

Ultimately, there’s a lot of flexibility in how we define generations. According to Pew Research, this is the breakdown that’s used most often by sociologists:

Again, these generations share experiences that define their upbringing, career prospects, personal bucket list goals, and finances. Having a generation you connect with gives a sense of collectivity and bonding. How much do you relate to your generation?

How Do You Calculate a Generation? 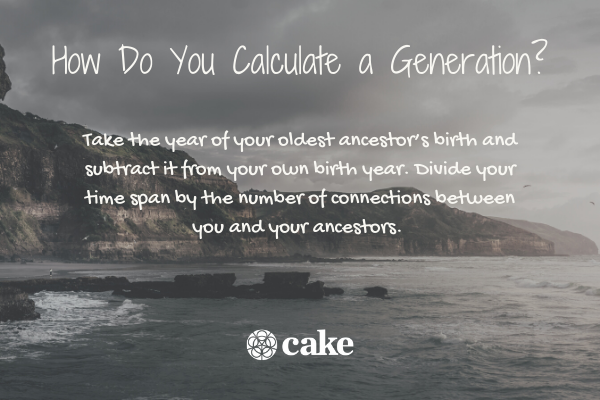 As mentioned above, a generation is typically a 20 to 30 year period, but this could be different depending on your family. In the past, people reproduced at a younger age than they do in modern times. That means our definition of generations is always changing and evolving.

Steps to calculate your family’s generation

If you’re ready to create your own generation calculation, you’ll need a few key pieces of information.

Once you have all the information you need, start your calculation with these steps:

You can break this interval down in a number of different ways. You might just look at the changes throughout the 19th or 20th century, or maybe between males and females. There’s a lot you can learn from this number, and it might shine a light on your family’s unique experience.

The Bottom Line on Generations

Generations aren’t always as cut-and-dry as they seem. A lot of people have an opinion of different generations, whether they’re commenting on senior citizens or the youth of today. What we can all agree on is that these generational ties play a large role in our society and our families. It’s how we define experiences, relationships, and culture.

If you’re thinking about where you come from, it’s time to also consider where you’re going. Start end-of-life planning to make proactive decisions about your own life and legacy. As we can see from studying generations past, these small decisions add up over time. This is how you’re remembered, so make it count.