Responding to an apology can be challenging, especially if you aren’t ready to accept it. Someone may try to say “I’m sorry” for something that happened after a tragic death. Or a person might apologize quickly and try to smooth things over. How do you handle these moments without defaulting to, “It’s OK,” when it really isn’t?

Here's how to accept an apology:

Apologies can create uncomfortable, awkward moments, so it’s easy to feel rushed into accepting one before really thinking about it. Here, you’ll learn more about how to listen and evaluate an apology before responding. A small amount of time can make a world of difference when a relationship is under stress. 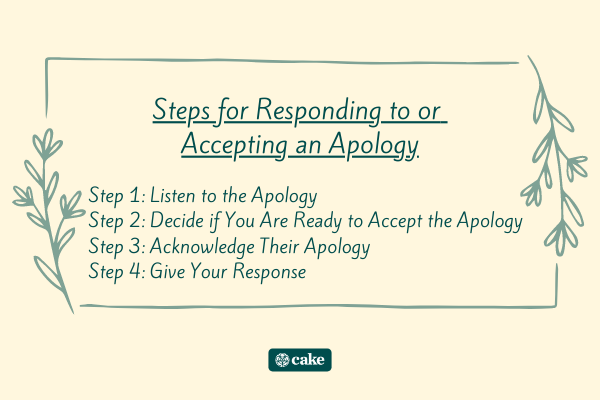 Step 1: Listen to the Apology

Find a quiet location with few distractions and prepare yourself to listen. Regardless of how ready you are to hear the apology, listen carefully with open ears.

Try to avoid reacting or interrupting and allow their apology to stand on its own. You will have plenty of time to respond after they finish speaking.

Step 2: Decide if You Are Ready to Accept the Apology

Once you’ve heard the apology, you get to decide whether you’re ready to accept it. It’s kind and respectful to acknowledge a person’s apology when they offer it, but you are not obligated to accept it. These questions can help you decide how to respond.

Does it seem sincere?

Body language can betray a person who isn’t apologizing sincerely. If they seem impatient or have a defensive posture, they may not be giving you an honest apology. Eye contact, a sincere tone of voice, and lowered head are signs of humility and remorse.

Does it include “but” or “however”?

These two words can often cancel out an apology. It’s lip service to try smoothing over the problem. Anything a person says after, “but,” or, “however,” does not fully acknowledge their actions or your pain.

Do they acknowledge the pain they caused you?

Some people apologize by saying how awful they feel and don’t say much about the person they’re speaking to. An apology that recognizes your emotional pain is worth remembering. You need to know the other person honors your emotions before moving forward.

Do they accept responsibility for their actions?

This part is critical. For an apology to be acceptable, the other person must show they understand how their actions caused you pain. When you hear them accept personal responsibility, you have a chance at repairing the trust between you.

Do they want to move quickly past the apology and return to normal?

If they skip through the apology and try to act like everything’s normal, step back and take a breath. Their apology may be an attempt to get out of an uncomfortable situation and save face. You have reason to be doubtful.

Are you ready to move forward?

It is 100 percent OK if you aren’t ready to accept the other person’s apology at the time they offer it. Even if they are sincere and ready to make amends, you may need more time. And if you aren’t able to accept it now, say that clearly.

It’s always appropriate to acknowledge someone for making a genuine effort. Regardless of your response, start by thanking the other person for gathering their courage and speaking up. If you have hopes of repairing your relationship, your respect and kindness are critical now.

The other person may have hurt you, but you won’t improve anything by being hurtful in return. When both of you act in good faith, you set the stage for honest communication.

Step 4: Give Your Response

You aren’t obligated to accept an apology just because someone offers it. It’s up to you to decide whether the time is right. The following list offers up several kind and respectful responses you can give depending on your situation.

We often say, “It’s OK,” far too often when someone apologizes. It’s easy to say and helps us avoid feeling uncomfortable. But often, a more detailed reply is better for addressing emotional pain and restoring trust. Reserve the, “It’s OK,” answer for times when the other person’s actions have almost no effect on you or create a minor mishap.

Acknowledge their effort while remaining uncertain

It takes guts to offer an apology, and this effort is worth recognizing. You can acknowledge a person’s effort to apologize without accepting it or offering forgiveness in return. Don’t feel pressured to accept an apology without being sure that you’re ready.

Thank the person for reaching out to you. If you aren’t sure about your next step, tell them you need more time to think about it. Regardless of their reaction, remain calm and kind.

When you’re ready to accept someone’s apology, you can move forward with the relationship. It does not necessarily mean you have forgiven them or put the problem behind you. That step may take more time to unfold.

By accepting the apology, you acknowledge that what the other person offered was sincere and with positive intent. You believe they are willing to repair the trust between you and make up for what they did wrong.

You may not be ready to accept their apology right now, or you may not believe it’s sincere. If you can’t accept it, thank them and state that you appreciate what they’ve said. Some emotional wounds heal slowly, so it’s reasonable to take your time with this if you aren’t sure yet. 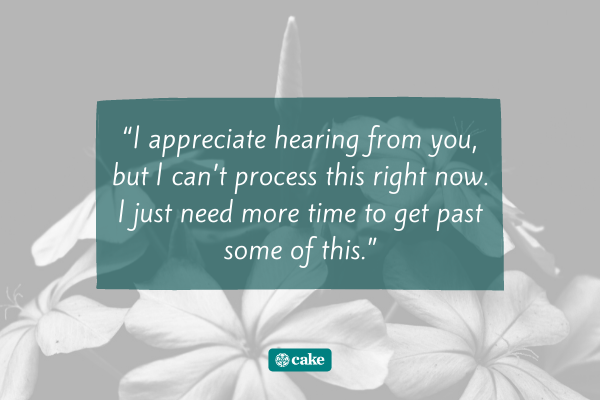 Apologies can happen in a variety of situations. Sometimes you may be dealing with other issues or aren’t emotionally ready to discuss the situation. Take a look at how these apologies are handled differently in each circumstance.

If someone’s apologizing after a death or tragic event

When tragedy strikes, grief can become overwhelming and complicated. If someone apologizes to you during this time, suggest reconnecting later. You won’t be able to process an apology clearly when you’re still in the early stages of grief.

If you’re still hurt or upset by someone’s actions, be open about this. Let them say their apology and acknowledge their effort, but be clear that you aren’t fully ready to move forward yet. Commit to revisiting it later after letting your emotions settle.

If you accept their apology

To accept an apology, you should feel that it was sincere and that the other person took full responsibility for their actions. If you feel satisfied and are ready to move forward, these responses are good ways to start the next step. Accepting an apology is not the same as forgiveness, so only say that if you are ready to let go of the issue.

If you need more time

Apologies don’t always happen at the right time for both people. If someone apologizes but you need more time, be honest about this. Listen first and then make it clear that you still aren’t able to accept it right now.

If you think the apology is insincere

Sometimes a person apologizes before they are ready to accept responsibility. If you think they aren’t sincere, tell them you can’t accept their apology now and be clear about your reasons. Let them know what was missing in their apology and what they need to show you in the future.

Moving Forward After an Apology

Creating a sincere apology takes effort, and so does responding to one. Resist the knee-jerk reaction to say, “It’s OK,” and consider a more genuine answer. Responding thoughtfully to an apology helps you know when you’re ready for the next step.

Condolences & what to say Relationships