It’s not an unusual sentiment. Trees hold great symbolism and meaning across many different cultures. In many ways, their life cycle mirrors the human experience. People start from a seed. You grow from young, small and easily buffeted by the wind too strong, tall and firmly rooted in the ground. Eventually, you grow old and become gnarled and stooped under the weight of your growth and experiences.

Our Top Picks for Tree Pod Burials and Alternatives

Imagine that when you died you didn’t get buried in a coffin six feet under the ground. Instead, you opted for natural burial and your body serves to nourish the soil around you. And in that very same spot, a young tree is planted and begins to flourish and grow.

A future like that isn’t too far off. Two Italian designers launched a project called Capsula Mundi or “burial pods” which seeks to change the way you think about and interact with the concept of death. 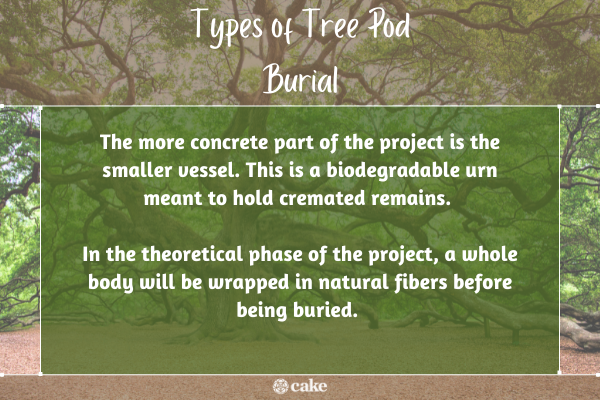 The Capsula Mundi project was started, in part, as a way to remove the taboo around discussing death. Humans have an aversion to facing our mortality, especially when you’re young. Funerals often have stiff, formal ceremonies and dark, claustrophobia-inducing coffins; without these trappings, you can begin to look at death as a return to nature.

In a tree pod burial, a small or large vessel is buried under the earth. The Capsula Mundi project has two options for burial, one of which is still theoretical. The more concrete part of the project is the smaller vessel. This is a biodegradable urn meant to hold cremated remains.

In the theoretical phase of the Capsula Mundi project, a whole body will be placed in the fetal position and wrapped in natural fibers before being buried. This process will be done with the large vessel.

Green burials are illegal in Italy where this project is headquartered, which is a large part of why the large vessel only exists in concept, but not in practice. However, the people behind the Capsula Mundi project hope to one day effect a change in those laws by challenging the way people think about death and dying.

The environmental impact of tree pod burials cannot be overstated. Traditional burials fill the earth with nonbiodegradable hardwood and steel, and bodies are pumped full of toxic embalming fluid. Natural burial options like tree pod burials will have a huge impact on the environment as the practice becomes more widespread.

People who gravitate toward green burial options are largely very eco-conscious and attuned to the current worldwide dilemmas stemming from climate change. Creative people also tend to flock to unique concepts like burial pods and cremation diamonds because they find the non-traditional approach refreshing.

How Much Do They Cost?

Because Capsula Mundi is the brainchild of two designers, it should come as no surprise that they have designed this item with consideration of form and function. The shape of a coffin is not one that occurs in nature. It is bulky and unwieldy. The egg shape of the pod is symmetrical in a pleasing way. It also carries a lot of symbolism, as eggs are the starting point for many life forms.

The small egg-shaped vessel that is Capsula Mundi’s biodegradable urn looks simple, but a lot of thought has gone into its size and shape. There’s also a good deal of engineering that goes into ensuring that the vessels are completely biodegradable. The designers are able to make interventions in the production process that allow them to add unique handcrafted flourishes so every urn is unique.

This level of design and style doesn’t come cheap. The biodegradable urns cost $457, and that doesn’t factor in the cost of cremation or burial plots. The average cost of direct human cremation is $1,100. However, you may be able to find similar urn options like this BioUrn for less than $200.

If you own land, it may be a perfect place to plant a tree burial pod. Be sure to check your local laws though, as not every jurisdiction allows for human remains to be buried on private property, even if it’s in the form of ashes. Also note that if you ever decide to move it may be quite challenging to relocate the planted tree, which could be distressing for your family. Many people have been opting for a conservation burial to avoid this dilemma.

In a conservation burial, burial fees are paid to an entity that uses those funds to acquire land and protect it in perpetuity. The burial fees for a conservation cemetery or natural burial preserve can cost anywhere between $1,000 and $4,000.

While this isn’t a small price tag, it goes to a worthy cause, protecting land for years to come. It also enables you to continue tending to your loved one’s tree even if you end up moving.

What Happens During a Tree Pod Burial? 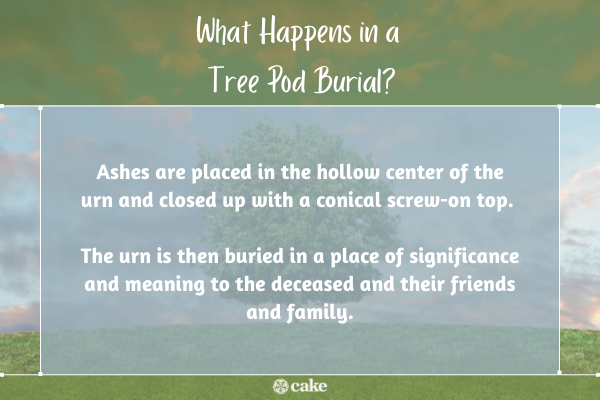 A tree pod burial is sure to be unlike any other funeral you’ve ever experienced. While some green burial practices are becoming more widespread, tree pod burials are relatively new and quite niche. Here’s a small preview of what you may expect:

Before a person dies, they will select a tree to be planted upon their death. This choice can be made by terminally ill people who know they will die soon. Or, it could be done by a healthy person to ensure their wishes are followed at the time of their death.

Ashes are placed in the hollow center of the urn and closed up with a conical screw-on top. The urn is then buried in a place of significance and meaning to the deceased and their friends and family.

After the urn is buried, a tree will be planted directly above it. Once the tree is planted, the family and friends of the deceased will be able to tend to the tree as a kind of living memorial.

Beneath the earth, the urn will biodegrade and the soil will reclaim and be nourished by the ashes within. The soil will be richer as a direct result of the ashes and will help the tree above it flourish and grow. Instead of a symbol of death, the tree is a tribute to ongoing life.

Is a Tree Pod Burial Right for You?

Tree pod burials may seem off-putting to people who have never considered nontraditional burial practices. But for some, being part of the soil that nourishes another living thing can a beautiful legacy. Tree pod burials allow you to be reclaimed by nature, while also allowing you to continue to live on in a truly tangible way that goes beyond the spiritual plane.