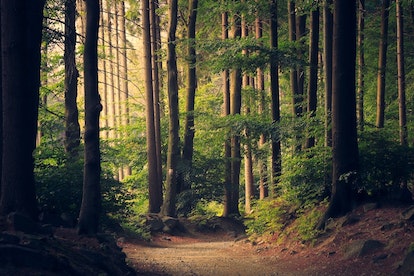 Human composting can be seen as not only an exciting burial alternative, but an easier way to give back to the earth. As sustainability and eco-friendly options for eating and preserving have gained popularity over the years, some others wonder: how can human bodies be composted as well?

Human bodies are composed mostly of carbon, water, and other organic elements. Even if bodies are buried without embalming, after a few years, they tend to decompose in the moist earth and their particles are dispersed into nature.

What is Human Composting?

The purpose of human composting is to mimic nature and contribute to the food chain. It’s not really a chain, but rather energy flowing in a constant cycle.

If you took science courses in high school or college, you may remember this. The sun provides energy to plants. These plants flourish until they’re consumed by a rabbit. A rabbit is then eaten by a coyote. Eventually, this coyote is killed by a bear. In the final stage of the energy cycle, the bear dies. Since they’re at the top of the food chain, it’s unusual for another predator to kill them. As the bear decomposes, nutrients go back into the soil. This helps plants grow, which allows the entire cycle to start again.

Through agricultural and technological advances, humans are now far removed from this natural cycle. They are the only creatures that don’t exist as a natural part of the energy cycle anymore. In theory, we all return to the earth eventually but at this point, that process is incredibly delayed.

Whether we choose cremation, a natural burial, embalming fluids or weighty caskets, these things delay decomposition significantly. All of these materials are also partly synthesized and can disrupt the decomposition cycle by adding poisonous materials. There’s no tradeoff for nutrients being put back into the soil till many years later. By then, at the current state of our environment, it might be too late.

How human composting came to be

The option for human composting began thanks to Katrina Spade, a graduate student in architecture who studied the funeral industry for a time. Her findings were disappointing, showing that the Western funeral industry is incredibly expensive and unsustainable.

While researching this topic, Spade researched how other cultures handle their dead, with a wide range in results. Traditional burial or cremation are just two ways for people to bury their dead. Spade’s research spurred her to collaborate with scientists at Washington State University, specifically in the Soil Science Department. Spade, together with scientists, conducted trial research to reduce human remains to soil-like material.

It’s the same concept as composting, with the only difference being the remains involved. With the body of a loved one, it is tricky to introduce composting as an option, given the possible sentimental attachment.

Now, Spade pilots her own company called Recompose. Spade’s company is structured to provide an alternative to burial and cremation options, and comes at a great time in the State of Washington.

Recompose is based out of Washington state, which recently passed legislation allowing human composting. Legal eco-burials are now available in that state. Under Spade’s direction, Recompose is up and running and will open a proper location to process human remains in Spring 2021.

How Does Human Composting Work?

You’re probably familiar with the basic tenets of composting. It requires a few simple things: oxygen, microorganisms, and organic material. Organic material is a broad category, which includes anything from food scraps and weeds to human remains.

Microorganisms break down this waste. But the entire process requires oxygen since it can’t occur in a vacuum. Even if you haven’t composted before, you know what this process looks like. Have you ever left a banana peel somewhere? If you come back to it after a few days, it looks different.

The technical term for composting human remains is recomposition. It relies on making unstable material stable. They will change and break down into natural elements over the course of time.

The idea of recomposition might seem new, but managing livestock deaths has been an issue for years. In that situation, it’s called closed vessel livestock mortality composting. The tenets this process relies on are important for human recomposition, too.

The actual process is pretty simple. The body is covered in natural materials, which facilitates the process. After being covered with straw or wood chips, the body breaks down due to microbial activity. It takes three to seven weeks for the body to be transformed into soil.

How to Use Human Composting

Everyone makes their end-of-life planning choices differently. Personality, religious views, budget, family traditions, and environmental concerns are all factors. Fortunately, two of those factors are easily researched. How much does human composting cost, and how does it impact the environment?

Burials are like weddings—costs range based on the individual. ost people spend somewhere between $8,000 and $25,000 on a funeral and burial.

Most cremations cost over $6,000 dollars. Since Spade’s facility won’t be running until Spring 2021, she can only provide estimates. The figure she quoted to local news networks is quite reasonable, with the total being around $5,500 for the entire process.

There are no energy costs or harmful chemicals involved. No formaldehyde, metal, or wood is sunk into the earth. In some situations, the best we can hope for is a ‘do no harm’ approach. With recomposition, your human remains will produce one cubic yard of soil. This is enough to plant something fruitful and lovely when the time comes.

Where is Human Composting Legal or Illegal?

If you live in a major city, you may be painfully familiar with restrictive codes. You may not even be able to compost kitchen scraps! Human remains, even when processed by a respectful, research-backed company like Spade’s, is out of the question. In legislative terms, though, progress is being made. The United States allows alkaline hydrolysis, a water-based form of cremation that mimics the idea of breaking down human remains, in 19 states.

Technically speaking, it’s not illegal in other states. Few laws govern the concept of human composting. But other laws may stand in the way. In the interest of protecting the environment, waterways, and other crucial geographical features, laws are in place. These prevent things like a burial plot without a liner or other harmful practices.

Some of these laws limit human composting by its very nature. Interest is growing, though. Other states and countries are inquiring about Spade’s project.

Human composting has been legal in Sweden since 2005. A pilot in unique funeral methods like promession and alkaline hydrolysis, this field is no different.

It’s tempting to make end-of-life planning decisions quickly or not at all. Human composting, as a feasible option, will not be available until 2021, based on Recompose’s strategy.

If this works for you, great! If not, there are other environmentally friendly, cheap options for you to explore. Have you considered a natural burial? Or green burial options? If not, these may be exactly what you’re looking for.