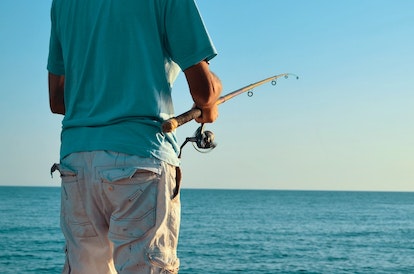 A father is often a child’s first teacher. From walking, riding a bike, learning how to eat, and how to tell the truth… fathers are the ubiquitous role models for their children. And as people age, their relationships with their parents change, evolving from teacher, confidant and maybe even becoming a friend.

But when a father dies, it can be hard to find a replacement for that unique gap in your life. It is especially hard to cope with a father’s loss during special occasions. How should you reflect on your dad’s birthday? What about your first Christmas without dad?

Thankfully, writers have put pen to paper when it comes to the toughest kinds of emotions. With poetry, quotes, and songs, perhaps you can find a unique combination to help express your sadness about missing your dad.

Poems That Say ‘I Miss My Dad’

Like anyone else, many poets had complicated relationships with their dads. From adoring children to wise adults, these poems chronicle those dynamics.

Merwin muses over the regrets he has about his father. As a young man, he was very busy with his own life. When he visited his father for the last time, though, things changed. Rather than rushing to leave his dad, he doesn’t want the visit to end. Sometimes, impending death provides similar moments of crystal clarity.

Sometimes ordinary dads are the greatest superheroes. Guest’s dad was nothing special. He wasn’t rich or famous, and received no accolades for his worth. But he rejoiced in his children, and that was enough. Guest’s dad was happy that his kids wanted to see him, and that fostered a firm relationship.

3. "Where the Sky Meets the Earth" by W. Todd Kaneko

This is a great poem for someone in love with nature. This is an odd poem that talks about how the earth isn’t a fit place to bury someone. The sky is where a human belongs, free with birds. At the end of the poem, Kaneko concedes that the sky and the earth are sometimes the same.

Knowing some souls alters us forever. When they die, the very air seems altered. Breathing and seeing become harder. And you start to remember things more clearly. Everything you never got to do with them, the kind words they said to you...it all suddenly matters much more.

5. “Letter to My Father” by Martin Espada

This is a deep, nostalgic memory of boyhood days. It’s a recollection of memories when Espada’s father seemed like a god to him.

6. "Away" by James Whitcomb Riley

Riley’s approach makes an impossible concept easier to understand. He refuses to say that his friend is dead. This may come across as denial, but it isn’t. Riley only takes a different perspective, and says that his friend is ‘away.’ That means they’ll reunite eventually, even though Riley doesn’t know where.

7. "Men at My Father’s Funeral" by William Matthews

Sometimes, silence is more powerful than words. This poem is from the perspective of a son who delivered a eulogy for his father. Williams delivered it, even though he had a rocky relationship with his dad. He can’t help comparing the difference between them, though. He is the one speaking, and his father is forever silenced.

8. "Father of My Country" by Diane Wakoski

If your father was distant, it may be hard to emotionally process your feelings. Wakoski admits that she rarely talked about her father. He was in the military, and she barely knew him. As an absent figure in her life, putting words to her relationship is a struggle.

9. "Those Winter Sundays" by Robert Hayden

Looking back to memories sometimes provides clarity about your dad. Hayden’s poem centers around one repetitious act of service from his dad. Every day, his dad would get up in the cold. This was before central heating! His dad would be the one to shiver through the morning and light the fire. By the time everyone else got up, the house was warm again.

Some fathers leave a legacy in the physical home they created. Smith talks about how the pipes and floorboards, even, are a testament to his dad.

Songs That Say ‘I Miss My Dad’

Many singers talk about their relationships under the disguise of lyrics. Songs about missing someone can be cathartic for you.

Have you ever dialed your dad’s number, even though you know he won’t pick up? Swindell has made a habit of dialing his dad’s number. When something breaks down, or he wants to celebrate, he automatically tries to tell his dad.

Aguilera had a complicated relationship with her dad, and sings about the very painful hurt and loss she experienced as a result. She admits that she blamed her dad for things that weren’t his fault. On the other hand, though, Aguilera puts the blame where it belongs. If you had a rocky relationship with your dad, this might be the perfect song.

13. "Dance With My Father" by Luther Vandross

Some memories are so tender and loving, they stay in your heart forever. The singer’s father died when Vandross was seven. Even so, he remembers a warm, loving home. The memory of his father dancing with Vandross and his mom is a precious one.

Carey insists that she’ll never say goodbye. This is because she carries the people she loves in her heart. As a child, she admits to misunderstanding her father. As an adult, this brought issues.

They separated emotionally and physically. Distance came up between them. But even so, Carey knows that her dad loved her very much. This might be a good funeral song for dad.

Born into a complicated family situation, Clapton voices his emotions in this tune. For a long time, he believed that his grandmother was his mom. He believed he had a sister, too—who was actually his mom. Coming to terms with this, and his fatherlessness, was a major blow.

16. "The Living Years" by Mike and the Mechanics

It’s painful to know that you should have told your father something before he died. The singer wishes that he could have found the courage to voice his feelings. But all his emotions are trapped on scraps of paper and imperfect conversations.

17. "Leader of the Band" by Dan Fogelberg

Support is sometimes the best gift a dad can give. His father chased his dreams, and taught his son to do the same thing.

Springsteen also had a difficult relationship with his dad. As he got older, he learned it was because they were too similar. It’s a difficult thing to admit. After a childhood at war, it would be easy to label his dad as the enemy. As he grew older, though, Springsteen gained perspective.

This song is uniquely told from both the father and son’s perspective. It’s a meandering ballad that’s meant to inspire forethought and gratitude. It’s easy to jump the gun, especially when you’re young. As a father figure, Stevens cautions that his son does otherwise. This is a good choice for your first father’s day without dad.

20. "When The Tigers Broke Free" by Pink Floyd

This is a song about someone’s father dying in war. The only announcement they got was a notice in the mail.

Messages or Social Media Posts That Say ‘I Miss My Dad’

21. I still remember the time my dad and I went hiking. It was only a few years ago, but one of the items on his bucket list was climbing Mount Rainier. We made it all the way! So happy to have those great memories with him. I miss hiking with you, Dad.

22. My dad was the one who taught me to drive. I learned in his car: a 1973 Dodge Challenger with a manual transmission. It was the coolest car I’d ever seen. I miss spending those afternoons with him in empty parking lots.

23. My dad was one of the best writers I ever read. Even though I’m biased, I loved seeing him work through a project. From ideas to seeing his face when his books arrived in boxes, it’s still one of my favorite memories. I miss getting the chance for a sneak peek at his newest novels.

24. I went hiking on my dad’s favorite trails today. I miss stopping to take pictures together, or look up a new bird that neither of us recognized.

25. I spent the day making fudge for Christmas stockings, just like Dad used to. I miss cooking with him!

26. My dad started a printing business in the 1970s. He had nothing going for him, but he still built it from scratch! Eventually, he handed it over to me. I miss the opportunity to ask him questions whenever something’s going wrong.

27. My dad was one of the most important people in my life. He taught me how to read, how to ride a bike, and how to study for the SATs. I miss him dearly.

28. My dad was always the person I would ask for advice. I miss those long conversations with him.

29. My dad is the reason that I joined sports. I miss him so much, and wish he could see me playing on a college team now.

30. I miss the fun of picking out a surprise present for my dad. Merry Christmas in heaven, Dad!

Grief is a sticky, complicated emotion. Taking the time to feel each emotion, even if it’s unpleasant, can help you in the long run. It also makes room to treasure all the great memories you made with your dad.

If you're looking for more ways to commemorate your father, check out our guide on what to do on your father's death anniversary, or "rest in peace" quotes.