Big emotions can inspire us to make the world a better place: we might donate money to a charity or have a plaque or commemorative marker placed. Our emotional outlets, on their own, may not be enough for the degree of grief or joy we want to express, so we turn to outward forms of showing how much someone means to us.

Whether we’re responding to the amazing life someone has lived, or to our grief when they die, it’s common to share stories about inspirational people by contributing to the causes they loved or putting their names in various places around our communities.

And if you're interested in unique ways to remember a loved one who passed away, you can consider a custom urn from a store like Foreverence or even have a memorial diamond made from ashes with a company like Eterneva.

What ‘In Honor Of’ Means 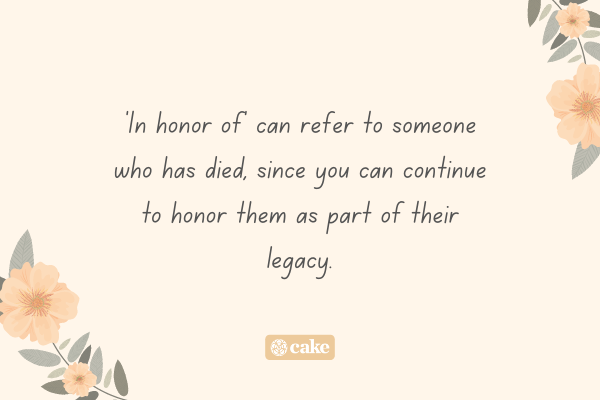 The phrase "in honor of" is more widely used, and used in more places. It simply means that you’re thinking of and paying respect to a particular person when you do something, such as donate or give a gift. Honor means “great respect for someone,” so ‘in honor of’ means anything that shows deep respect for someone else.

If you say that you are running a marathon in honor of your brother, he may still be alive and simply deserves your respect and gratitude.

‘In honor of’ can also refer to someone who has died, since you can continue to honor them as part of their legacy. For instance, some people who participate in Relay for Life charity events for cancer dedicate their day of walking ‘in honor of’ an amazing person who they know has died of the disease.

What ‘In Memory Of’ Means 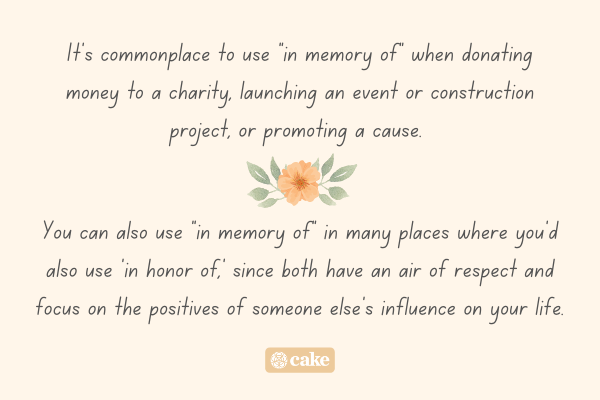 Using "in memory of" is more specific because it shows respect for someone who has died. It wouldn’t make sense to say you dedicate a competition victory ‘in memory of’ your Mother who is sitting in the front row. Someone who is still present to share memories with us doesn’t live on only in our memory.

Instead, "in memory of" is used specifically as a way to say that a major contributor to a particular choice or accomplishment is someone who passed away and lives on in our memory.

It's commonplace to use "in memory of" when donating money to a charity, launching an event or construction project, or promoting a cause. When making charitable donations or donating a portion of an inheritance, some people want that money to support a cause their deceased loved one believed in. In that sense, the donation symbolizes their legacy.

You can also use "in memory of" in many places where you’d also use ‘in honor of,’ since both have an air of respect and focus on the positives of someone else’s influence on your life. 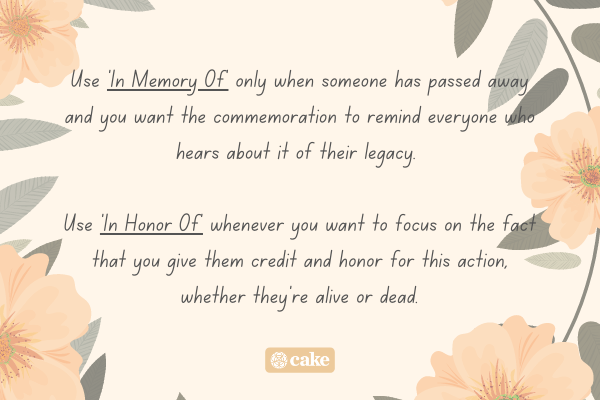 The simple choice is to use ‘In Memory Of’ only when someone has passed away and you want the commemoration to remind everyone who hears about it of their legacy.

Use “In Honor Of’ whenever you want to focus on the fact that you give them credit and honor for this action, whether they’re alive or dead.

Giving someone an award at a major event or function. Sometimes, when an award is given in honor of another person, that person may be present to deliver the award or give some remarks about why the recipient is deserving. You also might give an award in honor of a person who made significant strides in a field in their lives, but who has already passed away.

Naming a building or something else after them. Even if it's much smaller than a building, many commemorations are held in honor of a person who made a major impact on or made a big donation to the institution.

Dedicating a major accomplishment. When someone runs their first marathon or wins a gold medal in the Olympics, they often mention it was in honor of someone important in their lives. The same is said when movie stars win Oscars, where they get the chance to express gratitude through honoring those who helped them achieve their success.

Raising money for charity. Often, when someone devotes major energy to raising funds for a good cause, they have a personal connection to that cause. They're working in honor of someone who inspired them. For instance, if your friend experienced bad online bullying, you might become inspired to fundraise for an anti-bullying group in her honor.

Use ‘in memory of’ when…

Placing a memorial marker. If a marker is being placed to remind people of someone who died, the appropriate phrase to use is “This marker is placed in memory of…” followed by the person’s name. ‘Memory’ is used often for the rituals we complete to process our grief.

Donating to a charity they loved. While you donate to a charity in honor of someone, you can also donate in a person’s memory, recalling what mattered to them when they were alive. There can be comfort in enjoying something that someone we loved enjoyed.

Dedicating a book or art to someone who passed away. If you dedicate a piece of artwork or a book you’ve written by saying, “in memory of (person’s name),” you are indicating that the book is meant to call attention to the legacy of a person who has died. Pointing out their influence on you keeps their memory alive.

Hold a memorial service. Holding an entire service in someone’s memory is an example of an event that is focused on missing the person and their passing, making ‘in memory of’ a good choice of phrasing.

Creating a memorial scholarship. One common way to use ‘in memory of’ is in the dedication of a scholarship that is named for and in memory of a beloved deceased family member or friend.

Buying a memorial gift. Whether you make a photo album or create a commemorative ornament, you can make something to share with a fellow loved one, perhaps someone who is grieving even more than you are.

Getting a tattoo because of someone important in your life. One way that people commemorate loved ones is through tattoos that are of a significant symbol or image in memory of that person after they pass away. The tattoo remains as a reminder to think of and remember, a sort of memorial gift to show that their memory will live on.

Showing Honor and Memorializing Those We Love

The uses of "in honor of" and "in memory of" are subtly different, but often the same actions can be done for both.

If you choose to honor someone who is still living but who overcame many challenges or inspired you, that is the main circumstance where you want to use "in honor of." For any time when you want to draw attention to the great personality, accomplishments, or skills of someone who has passed away, you can honor them through the phrase "in honor of" or you can work to make their legacy live on through the phrase "in memory of."