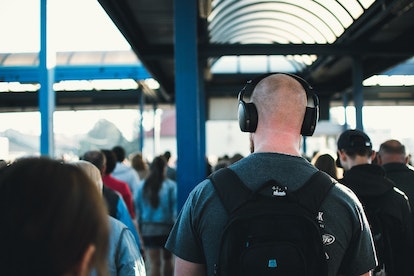 Anyone who thinks magic doesn’t exist outside of books and movies just hasn’t listened to the right song yet. Inspirational songs come in all shapes and sizes, and they power us through life’s most difficult challenges. Music is a form of time travel, transporting us through the years to bring us back to our favorite memories, places, and people.

If you need an extra push right now, there’s a soundtrack for you. These songs about time, change, and emotions remind us that we’re never alone in your feelings. Keep these songs close for when you need them most. These are the 50+ popular inspirational songs that will inspire you no matter the situation.

Pop songs are naturally upbeat and happy, so it’s no wonder that they’re also powerful motivators. Add these pop classics and modern hits to your playlist!

1. "Here Comes the Sun" by The Beatles

This pop-rock classic by the Beatles is one of the most recognizable songs of all time, and it’s sure to get you singing along.

Though somber at first, Rocket Man slowly builds into a triumphant melody about the lure of the stars and the universe.

One of the funkiest beats of the past few years, Uptown Funk is guaranteed to get you dancing.

Another classic by the Beatles serves as a call to action, encouraging listeners to pursue your dreams and find love.

Walk the Moon’s hit pop song has one simple message—get up and dance with me!

There’s nothing more motivating than Taylor Swift telling you it’s time to just “shake” all those bad feelings away.

Sia’s “Elastic Heart” paints the picture of someone fighting against the odds for love.

This 1980s classic was Elton John’s announcement to the world that he was back and better than ever after a battle with addiction.

A party classic, Miley Cyrus’ “We Can't Stop” reminds you that it’s your party, you can do what you want to.

This dance hall hit is not only a bop, but it’s also got an inspiring message about your life’s plan.

If rock ‘n roll gets your heart pounding, these songs are for you. With a long history of overcoming obstacles and sticking it to the status quo, rock is the perfect way to feel connected to your past and power forward towards the future.

For all the underdogs out there, Spoon’s created your battle cry.

This indie-rock favorite is all about self-forgiveness and feeling comfortable with yourself.

The Shins only promised a Simple Song, but they instead deliver an uplifting ballad to life and love.

As the title implies, you only live once. It doesn’t matter what you choose, just that you live life on your own terms.

It’s unclear whether the singer in “From Now On” is only with his lover in his dreams, but that alone is enough for him.

16. "Waterloo Sunset" by The Kinks

Written by lead singer Ray Davies, “Waterloo Sunset’ Is a lyrical song about the generation lost to World War II. What would happen if the war never happened? As long as they have each other, they’re in paradise.

If you want to have the best night out, you have Freddie Mercury's full approval.

Doctors use lithium to regulate the mood of patients with depression or other mood disorders. Kurt Cobain spins this meaning in “Lithium,” taking on a teasing tone.

This dream-like song compares life to a dream, reminiscing on a lover and lost memories.

20. "Sympathy For the Devil" by The Rolling Stones

This Rolling Stones classic serves as a history lesson. More importantly, it offers a unique take on the devil’s nature, implying that people aren’t often what they seem.

Rap and hip-hop have long been used as a form of storytelling. These rappers below all have something important to say, and now it’s your turn to listen.

This song by two of today’s top rappers is about standing up in the face of doubters.

As one of Juice WRLD’s many hits from before he died, this song is a form of therapy for the rapper who considered his relationship similar to a lucid dream.

Post Malone uses this song as a celebration of his success, and he invites listeners to join him.

This rap classic is Eminem’s call to action, saying it’s your moment, so own it.

“Just a Dream” proves just how powerful songs are when it comes to reliving past feelings and relationships.

Drake thanks God for his successful journey through the music industry.

Written amidst the LA Riots of 1992, this song is about remembering the good days.

This techno-rap mix has one clear message—what doesn’t kill you makes you stronger.

One of the most iconic dance hits of all time, “Push It” encourages listeners to get up and dance.

Country music evokes memories of simpler times without compromising on the feelings and themes of today. You don’t have to be from the country to fall for these classics.

After receiving a postcard from West Virginia, John Denver was inspired to write a song about a mountainous, welcoming place.

Dolly Parton’s strong voice begs Jolene not to take her man. Though she’s not optimistic, Parton isn’t afraid to fight for what she wants.

33. "The Devil Went Down to Georgia" by The Charlie Daniels Band

This song recounts the devil’s visit to Georgia where he challenges a boy to a fiddle duel. The boy plays for his soul (literally) and wins.

Womanhood isn’t always sunshine and rainbows, but it does have its perks. Shania Twain celebrates women everywhere with this country classic.

Dolly Parton might have a joking tone with her “9 to 5” lyrics, but she makes a big statement about the inequality of women in the workplace.

36. "Before He Cheats" by Carrie Underwood

Who knew revenge could be so sweet? Carrie Underwood does, apparently.

“Cruise” is a song about enjoying the simple things in life.

Blake Shelton speaks directly to blue-collar workers in “God’s Country,” reminding them of how great it is to be alive.

After getting the news of his father’s life-threatening illness, the singer learns to live each day like it’s his last.

Some emotions are more powerful than others, and Taylor Swift sees her love burning red.

Graduation marks the end of one chapter and the beginning of another. Let these songs ease the transition while reminding you that while the experiences were temporary, the memories are forever.

Is youth wasted on the young? This upbeat song is all about wishing to return to yesterday with the wisdom of today.

42. "Stuck In The Middle With You" by Stealers Wheel

Written as a parody of a music industry cocktail party, this song pokes fun at spending time with different types of people.

This Queen favorite is all about enjoying your time with your friends, no matter how limited.

As the name implies, this is the ultimate graduation song. The lyrics are guaranteed to bring tears to everyone’s eyes.

This song is a reminder that friends are forever.

OneRepublic argues there’s no room for regrets if you’re living life to the fullest.

This 1980s classic is a reminder of the best times in life.

No one ever told you that life would be this way, but the Friends theme song has an important message. Your friends will always be there for you!

We could all use some help powering through our workouts. These songs work hard, so you can too.

Titanium is one of the strongest metals, and this song is an anthem for strengths.

Being a rebel has its perks, and Portugal. The Man surprises listeners from start to finish.

An unofficial party anthem, this song is all about the mixed feelings of heartbreak.

As the theme song to Rocky III, it’s no wonder this is an athletic call to arms.

This pop mix is hard not to dance to, and its upbeat tempo is just what you need to feel the burn.

Press Play on Your Inspiration

Music is a powerful tool for inspiration. Like our favorite life-changing books, these songs stick with you after they end. They loop in your head and keep you company in dark times. Whether you listen to pop, country, or everything in between, it’s time to get your motivation flowing.

Let these inspiring songs empower you to take the next step towards a confident future. Start end-of-life planning to prepare for everything life has in store.