The vocabulary of death can be confusing as the processes and the language have changed over time. To make it more confusing, people have also created euphemisms to describe some portions of the process regarding the death, burial, and funeral of a loved one.

As the subject of death became more taboo and less physically present, language was developed to help people protect themselves from the subject's harsh realities.

The vocabulary of death itself is also very formal. When someone dies, everyone starts sounding like their grandmother. They use the words "condolences," "bereavement," and "interred."

Let's discuss the word "interred." We will find out if there is a difference between that word and the more common "buried." We will also discuss how these words relate to "inurned" and "interned."

What Does It Mean to Be Interred? 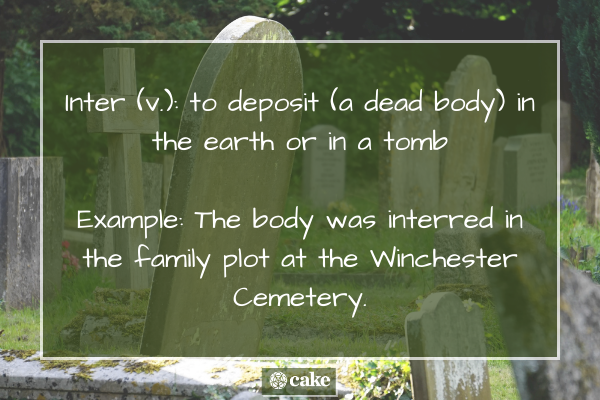 Merriam-Webster defines the past tense and past participle of "inter" as "to deposit (a dead body) in the earth or in a tomb."

Those who remember their prefixes or studied roots in high school English may recognize the "terr" within the word as being related to the Latin root "terra," which means "earth" or "ground." "Terr" is also found in the words "terrestrial," "terrarium," and the phrase "terra firma" (which means "dry land").

You may run across the word "interred" used to describe the burial of something besides a body, though Dictionary.com says that this usage is obsolete. Though few would say "the dog interred the bone in the backyard," you are more likely to see "the family interred the photograph with their loved one."

The body was interred in the family plot at the Winchester Cemetery.

You may also see "interred" used to describe the act of burying something alongside a deceased body.

The family interred the Maestro's baton with his body.

Finally, some may use the word "interred" when a body is placed in an above-ground burial place. This isn't the precise definition of the word, but it can be found in literature.

The remains of the saint were ultimately interred in the cathedral.

What Does It Mean to Be Buried? 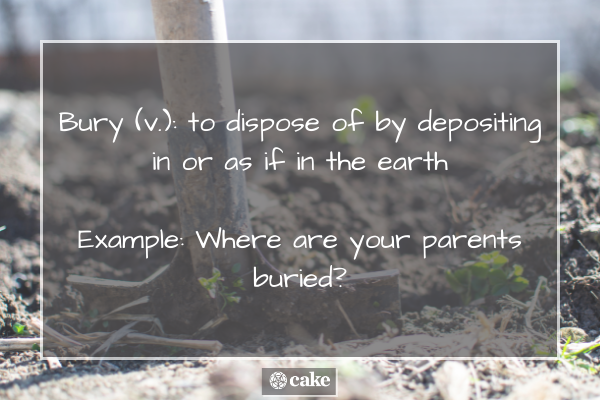 In the funeral industry, "burial" usually refers to a process of a person being laid to rest within a casket in a cemetery plot. Many Americans would consider this as the traditional burial process. However, a person can choose to be cremated and have the cremains buried in a cemetery.

The first definition listed in the dictionary for the word bury says, "to dispose of by depositing in or as if in the earth."

The word "bury" comes from the Old English word "byrgan," which means "to raise a mound, hide, enclose in a grave or tomb, inter." It is also related to the Proto-Germanic word "burzjan," which means "protection, shelter." The term "burying-ground" was first used to label a cemetery" around 1711.

When writing about death, the word "buried" is usually used literally.

Where are your parents buried?

Some may use the word more generally to refer to a death.

Steve is having a hard time because he buried his mother today.

Other Words That May Cause Confusion 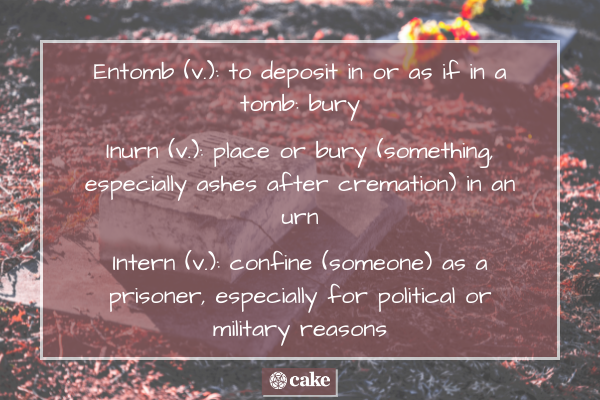 Before we discuss the critical differences between the "interred" and "burial," let's make everyone confused by discussing three other words that are somewhat related: "entombed," "inurned," and "interned."

"Entombed" is also similar to bury or inter, as in "to deposit in or as if in a tomb: bury." The word is also used when remains are placed inside a structure, such as a mausoleum, columbarium niche, crypt, or cave.

"Inurned" also means "entomb or "to place in an urn." Some people choose to keep their loved one's cremated remains inside an urn temporarily before scattering the ashes or permanently inside a columbarium niche.

"Interned" means "confined or impounded especially during a war." Some people inadvertently add the "n" sound to the second syllable when speaking about death. This is incorrect.

What do we learn from all these words? We know that people tend to be extremely confused about which word to use when writing about death. Let us help the situation by giving you a few key differences between the words "interred" and "burial."

Most of these differences lie in very specific uses and details. However, once you review these key differences between "interred" and "burial,” you will know for yourself if you are using the right word.

1. "Buried" can refer to a person being placed underground.

Cremated remains can also be buried. If you plan to bury your loved one's cremated remains, first check with the cemetery staff. You may need to purchase a specialized urn that will not collapse under the weight of the earth. Otherwise, you may need to buy a vault for the urn to be placed in before burial.

When people speak of "interred caskets," they mean buried caskets. At times, the word can be used to describe the body being put to rest in some other way. The "interment of the casket" can mean that the casket is buried, placed in a mausoleum, or placed in the walls of a crypt.

3. "Entombed" is typically used when the body is placed in a mausoleum, columbarium niche, or lawn crypt.

Mausoleums are above-ground structures that hold bodies. A columbarium is a structure that contains many "niches" or shelves to hold urns. A lawn crypt is a modular unit buried underground that holds many caskets.

4. "Inurned" means that the cremated remains are placed inside an urn.

Some people choose to leave their loved one's remains in an urn forever, and others may scatter them or create something out of the cremated remains.

5. The word "interned" is unrelated to death.

An internment camp is a prison used during times of war. Interment (without the second "n") is used to describe an individual's final resting place.

6. You may see the words used together.

For example: The man's inurned remains were later interred at the cemetery.

7. Interred is a euphemism for "buried."

In the industry, some words are preferred over others to soften the harsh realities of death. Some people use the word "interred" instead of "buried" because they want to avoid the imagery of a body being placed in the ground.

8. Interred is a formal term for "buried."

People tend to use more formal language when writing about death.

What Does This Mean for You?

At some point, you or someone you love will need to decide what to do with your body. They (or you) will need to consider all the types of burials and decide on your final resting place. We have referred to traditional burials and cremation, being entombed in a mausoleum or a lawn crypt, having your urn placed in a columbarium niche, a mausoleum, or buried in a cemetery.

What you may not know is that these choices are just the tip of the iceberg. As people have become more open to alternative final resting places, the industry has exploded. You can have your cremated remains placed in a pod to help fertilize a tree, pressed into a vinyl record, dispersed by being blown up in a firework, or made into a beautiful piece of glass artwork.

Even though we learned that the word "interred" originated from the Latin root "terr" meaning "earth" or "ground," not everyone uses the word correctly. The word "interred" is not always used to mean the burial of a body, so you may have to use the surrounding context to determine the actual final resting place.

When it comes to making your own plan, precision is essential. Leaving instructions that you wish to be "laid to rest" at a specific cemetery may leave your family scratching their heads. After all, does that mean you want to be cremated and have your remains buried or placed in a columbarium niche or garden wall at the cemetery?

Do you wish to be placed in a casket and placed in a mausoleum or lawn crypt? These words are just among the many to describe your final resting place.