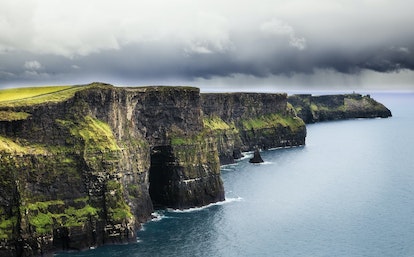 Grief can be an incredibly raw feeling. Fresh loss can make you feel as though a vast chasm has opened within you. Sometimes you want nothing more after the death of a loved one than to scream and cry. Sometimes the only thing that keeps us from making an emotional scene at a funeral is a sense of propriety (or just a fear of embarrassment).

For a long time, there was a practice where loud and flashy displays of emotion were de rigueur. In Ireland, keening was a big part of the mourning landscape starting around the sixteenth century.

Keening remained a standard part of Irish funerals until the middle of the twentieth century. Here we’ll learn more about keening and its storied history.

What’s the Tradition of Irish Keening?

Before we talk about the history of keening, let’s talk about its definition. Keening is, in simple terms, a vocal lament for the dead. “Keen” is derived from the Irish and Scottish Gaelic term caoineadh, which means “to weep or to cry”. But it isn’t just formless wailing. There is a methodology behind this ritual, which we will explore.

Keening was, without exception, performed by women. These women could be family members. However, they were often paid, professional mourners who were frequently compensated with a glass of whiskey.

While keening is usually associated with Ireland, the tradition actually has its roots in various other cultures.

The ancient Greek poet Homer wrote about female mourners who wailed somewhere between the 12th and 8th centuries BCE. In the 5th century BCE, the Greek historian Herodotus described keening-like behavior amongst ancient Egyptian women and the women of Sparta. Virgil, the ancient Roman poet, also referenced keening in his epic poem Aeneid, which was written in the first century BCE.

While these acts weren’t called keening, the descriptions of them seem indistinguishable. And these are far from the only examples. Jewish, Spanish, and British traditions have precursors to keening, as do countless other cultures.

So what is it that characterizes these examples as precursors to keening? Namely, they embody many of the same ritualistic aspects. These include:

What differentiates Irish keening from these other examples is their adherence to more formal and specific poetic elements. These include:

While keening was an incontrovertible part of Irish funeral tradition, the practice has nearly died out. In the 1950s, the Catholic Church expressed disapproval with the ritual. The reasons for this were manifest. The official line from the church was that keening was pagan.

However, modern theorists posit that the church didn’t want priests overshadowed at funerals, especially by women. Families, fearing the disapproval of the church, began to shy away from the practice.

Marie-Louise Muir explored the end of the tradition in a 2016 BBC Radio 4 documentary called Songs for the Dead. She interviewed some of the very few people left alive who witnessed keening in their childhood.

Irish folklore also has a figure with many parallels to keeners. Banshees (or Bean Sídhe in the Irish language) are mythological female spirits who signal the impending death of a family member or loved one. They herald death by shrieking, screaming, or keening. Their eyes are often described as being red from constant weeping. They are a member of the fae community.

Keening can be incredibly off-putting to someone who isn’t used to it. In Songs for the Dead, Muir described it as:

“To my ear, as an orchestral, classically trained musician, they were off-note. That unsettled me. It’s akin to nails being scraped down a blackboard. Every atom of your body cringes against it. You just recoil. You’re recoiling from the horror of loss, but this music is incredible. It’s expressing how you’re feeling.”

But while keening is an acquired taste, it played an important role in the mourning process. Even if you weren’t a keener, just witnessing their raw emotion could be cathartic.

Through their emotional wailing, family members could feel as though someone was putting a voice to their grief. It was also considered a way to honor the dead and share their accomplishments.

Examples and Songs of Irish Keening

While keening has largely fallen out of fashion, there are many enduring examples of Irish keening songs. They are incredible cultural artifacts that are well worth listening to.

They also make excellent Irish funeral songs if you’re planning a traditional Irish funeral. Here is a list of keening songs for you to listen to:

1. “Song of Keening" by Áine Minogue

Minogue is an accomplished Irish harpist, singer, and composer. She was born and raised in Ireland and has made a career performing and arranging music that honors her heritage.

On this track from Celtic Lamentations, Minogue uses her deep knowledge of keening to improvise in the traditional style.

The late Eithne Ní Uallacháin was a gifted singer and flutist. This song from her album Bilingua incorporates elements of an ancient lament called “Caoineadh Airt Uí Laoghaire”.

Pádraigín Ní Uallacháin is an Irish singer and songwriter, as well as an academic. She was raised in an Irish-speaking family, which has given her deep traditional roots.

Her research skills paired with her musical talent makes her an ideal candidate to preserve the keening tradition.

Minogue appears on this list more than once, because she has done so much to preserve and elevate the tradition of Irish keening.

She sings this Scottish lament, a variation on the Romeo and Juliet story, in Scots Gaelic.

Bagpipes and keening have some similarities: namely, the sounds can be off-putting to people who haven’t developed a taste for them.

While the songs listed above are all excellent examples of keening, they aren't the most authentic keening recordings. Those are found on the 1957 album Songs of Aran. This field recording documents several vocal traditions from remote Irish isles, including two keening songs.

Both keening tracks are labeled “Caoineadh na Marbh”, which translates to Caoine for the Dead. One is attributed to Bridget Mullin, while the other is credited simply to an unknown Aran female singer.

The Rich Tradition of Irish Keening

Keening is a tradition that, sadly, has mostly gone away. You can occasionally still find it at an authentic, traditional service like an Irish wake. But this unique and remarkable mourning ritual is in danger of being forgotten.

Take the time to read more about it and listen to some keening songs. Even if it’s not to your taste, you may find yourself surprisingly moved by this haunting tradition.