One of Ireland’s best-known traditions is the Irish Wake. Ireland’s rich history of both Paganism and Christianity has led to a unique funeral practice that’s often misunderstood by outsiders.

To those who have never been to an Irish wake, these events appear jubilant and profoundly sad simultaneously. This culture of both morning and merrymaking has survived to modern times. The Irish have a unique perspective on death that reveals itself in their wake tradition.

Jump ahead these sections:

Whether you’re attending an Irish wake or you’re simply interested in this one-of-a-kind practice, keep reading. We’ll uncover what happens at an Irish wake, including customs, songs, and etiquette. 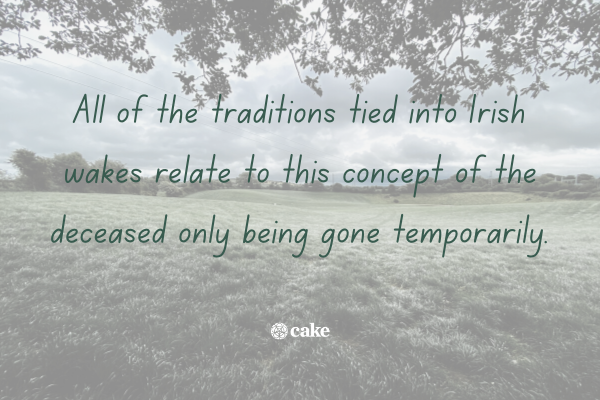 An Irish wake involves allowing family and friends to pay their last respects to the deceased with an open casket, rituals, prayers, music, poetry, food, and drink.

The Irish wake tradition goes back further than Pagan times. Unlike other Western traditions, Irish funerals can go on for days, especially in the case of an older person dying. While traditions are slowly becoming more modern, Irish wakes still take place in the countryside and other parts of the world with large Irish populations.

In Irish tradition, the day someone dies is their “third birthday.” The first birthday is their actual birth, the second is their baptism, and the third is when they enter the kingdom of Heaven. With this final “birthday” comes a new celebration for the loved one.

The most well-known part of the Irish funeral process is the “wake.” This name supposedly comes from the lead that was historically in pewter mugs used for drinking stout. Lead poisoning would cause a sleep-like state that’s said to look similar to death until the person wakes up a few days later.

While this is likely just a rumor, it’s interesting to see how this tradition survived through generations. All of the traditions tied into Irish wakes relate to this concept of the deceased only being gone temporarily. While wake practices differ across Ireland, attending an Irish funeral is something you’ll remember for a long time to come. 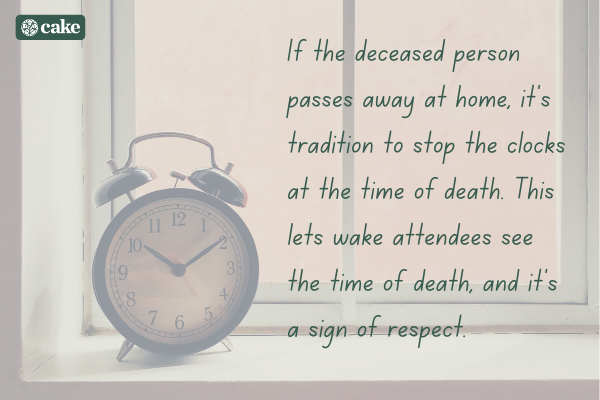 Now that you understand the unique history behind Irish wakes, it’s time to take a look at the many traditions. While these can vary according to the local area, there are a lot of things that make Irish wakes the experience they are.

There are a few practices particular to Irish wakes. The first has to do with household clocks. If the deceased person passes away at home, it’s tradition to stop the clocks at the time of death. This lets wake attendees see the time of death, and it’s a sign of respect.

Another practice is the treatment of mirrors. In Irish folk legend, mirrors are gateways to other worlds. Some believe that the soul travels through these mirrors.

To stop this, mirrors in the home point towards the wall. This allows the soul to pass on to Heaven uninterrupted. All of these practices add to the symbolism of Irish wakes.

In Ireland, the funeral prayers are traditional Catholic prayers. While the family might choose their own eulogies during the wake, the funeral mass will likely focus on familiar prayers for the departed.

These will either be in English or Gaelic, and the most common Irish prayers are:

Music is very common in Irish funeral ceremonies. Music is often sung or played on popular instruments, often the bagpipes.

It's common to hear Catholic funeral songs, particularly during the mass service. Outside of religious music, songs are based on folk traditions. Common Irish wake songs include:

With such a rich literature tradition, it’s no surprise that many Irish wakes and funerals include poetry. From traditional Celtic proverbs to well-known ballads, there are a lot of options for families to choose from. Popular Irish memorial poetry is:

Irish eulogies are also common at wakes. These define the part of the wake used to offer condolences. Irish eulogies, also called “keening,” coming from the Gaelic word for “the Irish cry.”

In these eulogies, the speaker shares the qualities of the deceased as a way to express his or her grief. Keening isn’t clearly defined, but it falls between a prayer and a poem used to share the pain associated with loss.

One of the most well-known keening is “The Lament for Art O’Leary.” Written in 1773 for Eileen Dubh Ni Chonail. It goes:

“My steadfastly loved one…

Your blood was streaming from you

And I did not stop to wipe it, but drank it up from my palms…

My love and dear companion…

Rise up and come home beside me…”

Food and drink are a large part of Irish wakes. During the wake, people usually bring food to the grieving family’s home. Alcohol is also brought during this time. Tea and sandwiches are served during the wake visitation hours, and it’s not uncommon for whiskey to be poured into the evening.

Sharing meals and drinks is a way to celebrate the life of the departed. It also brings some relief to those mourning. Like many traditions, food and drink are a way to heal and bond.

There are clear processes for a traditional Irish wake. First, the deceased’s body is “laid out.” Historically, this was when the body was cleaned, dressed, and placed in a coffin for display in the home. Today, funeral homes handle these steps. Either way, the body almost always returns to the home for the wake period.

Mass is the following day, and the coffin stays in the church overnight. After the funeral mass, the body takes its last journey to the cemetery where it’s buried.

Finally, after the burial, it’s normal for the family to host a lunch or memorial for those who attended the funeral. Celebrations and merriment can continue into the evening. 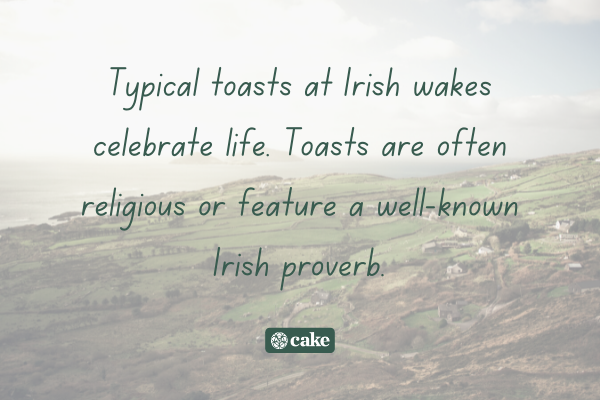 If you’ve never experienced an Irish wake before, it is hard to know what to expect. These frequently asked questions will help you attend an Irish wake with confidence.

What’s the dress code for an Irish wake?

For an Irish wake, it’s traditional to wear black. Because these funerals can be multi-day affairs, you’ll wear black to the home wake, funeral mass, and burial. For the mass, in particular, it’s important to dress conservatively.

In some parts of Ireland and the western world, black is becoming less of a requirement. However, this will depend on the family’s wishes. Read our full guide to what to wear to a funeral for more guidelines.

What should guests do at an Irish wake in a home?

Family members and guests are welcome to visit during a home wake. When you enter a home for a wake, you should remain to the side of the coffin. You are free to say prayers or spend time reflecting on your time with this person.

Keep in mind that it is considered rude not to view the body. Guests who are not in the immediate family are usually expected to leave the home by 8 pm.

Should guests bring food or drinks to an Irish wake?

Bringing food or drinks to an Irish wake is encouraged. Not only is this a kind gesture to the family who likely is too busy to prepare meals, but it’s a sign of respect.

There are no limitations to what you can bring, but remember everything should be easy to serve and in a disposable container. In the Irish tradition, both food and wine are welcome as sympathy gift ideas.

Other than food or flowers, it is not common or expected for guests to bring sympathy gifts to an Irish wake. Instead, guests show their respects by spending time with the family and reflecting on their time with the deceased.

Do people play games or dance?

Aside from the funeral mass itself, Irish wakes are lively affairs. While this will depend on the family’s particular customs, it’s not uncommon to play games or dance, especially late into the evening.

The Irish don’t shy away from whiskey or even homemade alcoholic brews, so these are quite the celebrations.

What are some typical toasts at an Irish wake?

The most common toasts usually reflect on the deceased or wish blessings on the grieving family.

Celebrate Life at an Irish Wake

Unlike other traditions, Irish wakes don’t shy away from all of the emotions that surround the death of a loved one.

From the outside, these can be confusing events, especially considering the high levels of excitement. However, for anyone who’s experienced them firsthand, they’re truly a spectacular way to celebrate a life well-lived.

Now that you know what happens at an Irish wake, you can see why it’s one of the most respected funeral celebrations. Even though these traditions are slowly modernizing, it is still important to understand where they came from.

Learning about traditional funeral practices is a great way to educate yourself about end-of-life planning for yourself and your loved ones.