If you or someone you know has recently lost their spouse, it may be difficult determining if a widow is Ms. or Mrs., or something else altogether. You may also be asking, “Is a widow still considered married?” This and other status changes in a newly widowed person can create much personal and social confusion.

Avoid awkward situations and the anxiety of addressing someone who’s recently lost a spouse by learning from and following some of the suggestions below.

Is it Widow, Widower, or Something Else? 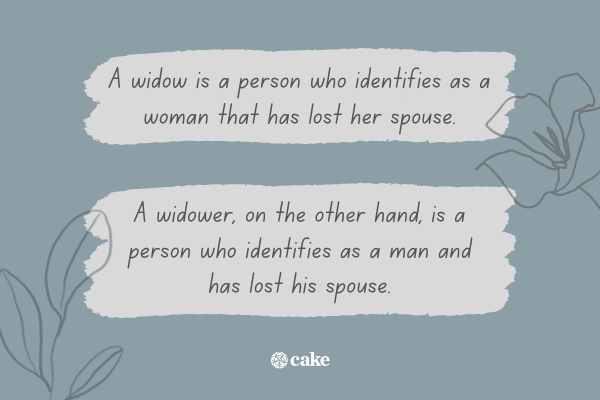 Before launching into the marriage status of someone whose spouse has passed, you may be wondering...which term is even applicable to this situation?

When it comes to dealing with the aftermath of your partner’s death, one of the most challenging things to contend with as a widowed spouse is your changed status.

For example, you may not know if a widow is Ms. or Mrs., or something else altogether. You may not even know what to call someone in this situation. Do you call them a widow or a widower?

Here is the difference between the two:

There are complex emotions that come up after your spouse dies that can affect many people differently. Consider joining a widow support group to help you process and understand your grief.

Are You Considered Married if You’re a Widow or Widower?

Whether you consider yourself married as a widow, widower, or widowed spouse is a matter of personal preference. Legally you are no longer married after the death of your spouse. From a spiritual standpoint, in religious ceremonies, you usually recite vows that say married “until death do us part,” or something similar.

Some basic things to keep in mind are:

How Long Are You Considered a Widow or Widower? 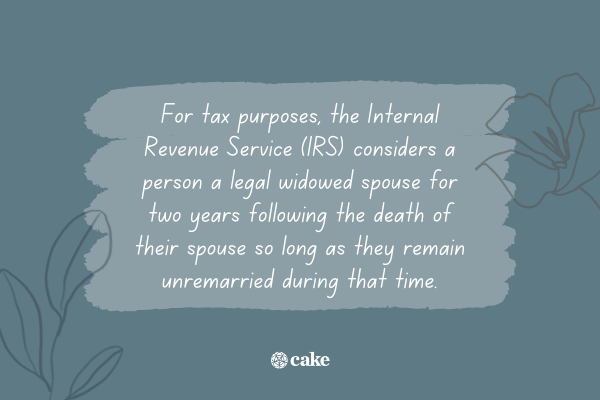 A person can live out the rest of their lives under the title widow or widower as long as they do not remarry after the death of their spouse.

For tax purposes, the Internal Revenue Service (IRS) considers a person a legal widowed spouse for two years following the death of their spouse so long as they remain unremarried during that time.

Dating after death of spouse

Many newly widowed persons ask how long after a spouse dies is it okay to date. There’s no magic formula for deciding on the right time for a person to start dating again. You’ll have to find what feels right for you, and consider where you’re in your grief process before making that decision.

Some people are ready to start dating almost immediately after the death of their spouse. Others may choose to remain single for some time while mourning, or for the rest of their lives.

A person that has dedicated the last several weeks and months of their spouse’s lives caring for them may feel ready to start dating almost immediately after their spouse’s death.

One reason for this is that they’ve had time to process their grief and may feel ready to move on with their lives soon after. Although society may shun a widow who starts dating immediately after their spouse’s death, there’s nothing legally or morally wrong with doing so.

The stages of grief for a widower can be different from that of a widow. While one person may be feeling the effects of their grief and sorrow for months after the death of their spouse, others are ready to resume living their life almost immediately.

When a widow(er) loses their spouse at a young age, it may be challenging to live out the rest of their lives without getting back in the dating pool. In cases where young children are involved, a young widow(er) may consider dating to find a suitable partner to help with the childrearing.

If there are no children, a widowed person may want to start dating to find a suitable partner to have children. There are no legal rules against dating after your spouse's death, and you can do so whenever you feel that you're emotionally ready to move ahead with your life.

Different cultures have differing views on dating after the death of a spouse. Cultures worldwide have their set rules and traditions in how they view dating and remarriage after widowhood. The expectations for men and women may differ according to these sets of beliefs.

In the U.S., dating after a spouse’s death is considered a normal part of moving forward from grieving. It’s not out of the ordinary for a widowed person to remarry in Western culture. And, although society may raise a few eyebrows when someone remarries soon after the death of their spouse, the gossip soon quiets down, and life resumes as usual.

What is a Qualified Widow or Widower?

A qualifying widow or widower is another name for a federal tax filing status that allows you to file taxes as if you were still Married Filing Jointly with your spouse. This privilege is extended for two years following the death of your spouse.

For the two years after the year of your spouse's death, you can use the Qualifying Widow(er) filing status if all five of the following statements are true:

The benefits of the Qualifying Widow(er) filing status is lowered tax rates and the highest standard deduction amounts on your taxes if you don't otherwise itemize your tax deductions.

This filing status entitles you to use joint return tax rates and the highest standard deduction amount (if you don't itemize deductions). It doesn't entitle you to file a joint return.

Consult with a qualified tax accountant for more detailed information as to how this filing status may help you save on your taxes.

Other Implications of Being a Widow or Widower 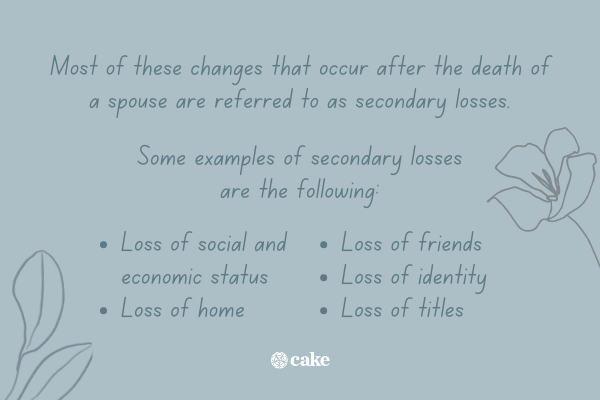 Some other things to consider after becoming a widow are how your social life and status will change. Most of these changes that occur after the death of a spouse are referred to as secondary losses. The primary loss is that of the spouse, and the secondary losses being the resulting losses.

Some examples of secondary losses are the following:

You can expect that once the condolence visits and phone calls end, the social invitations may start to dwindle. This is especially true if your friends are all part of a married couple.

When you lose your spouse at any age, you lose a part of your income that you may have grown dependent on to meet your necessary living expenses.

Unless there was a life insurance policy in place or other sources of income, chances are that you’ll have to make financial adjustments to your spending and lifestyle.

Many people whose spouses have died face the challenges of reinventing themselves and their lives now that they are no longer a part of a married couple.

Marital Status After Death of Spouse

How you address a widow comes down to personal preferences. You can avoid some awkward moments by merely asking the widow how they prefer to be addressed.

A spouse’s death legally changes a person’s status to “no longer married,” but a person can choose to consider themselves married for as long as they want. There’s no right or wrong way in choosing what to call yourself. It all comes down to a matter of personal choice.

Loss of spouse or partner