One day, over a thousand years ago, a man began having visions and hearing voices. To help him understand why—he meditated. Then an angel appeared and shared his revelations. This man was Muhammad, the prophet of the second-largest religion in the world, and the angel was Gabriel.

Years passed, and Muhammad began to preach publicly. The messages he received from Gabriel were written down in the Qur'an, the Islamic holy text. Today, the Qur'an guides Muslims around the world on how to live their life. For Muslims, physical life is only the beginning. Eternal life doesn’t begin until after death.

In this guide, we’ll explore the vivid descriptions of the Muslim afterlife, where the soul goes, and why it’s essential to understanding Islam. By learning about death cultures around the world can we reflect on our own beliefs about the afterlife. 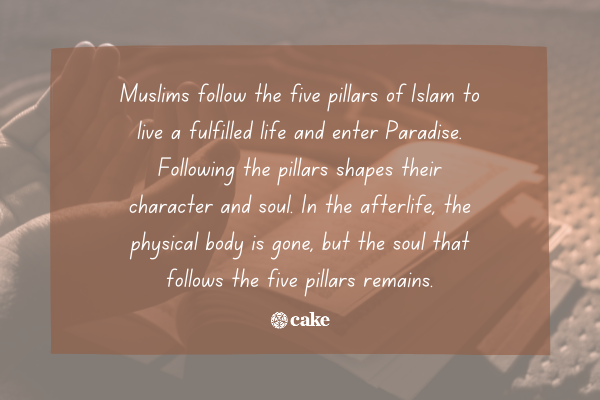 The afterlife or Paradise is the ultimate goal for Muslims. It’s a beautiful place filled with peace, prosperity, and life’s pleasures. To reach this beautiful place, Muslims must dedicate their life to Allah or God. Muslims look forward to death—a time when they begin a new life.

After death, angels ask the dead questions like: “Did you pray to God? Did you pray to only one God? How did you spend your life and youth?” Only those that follow the pillars of Islam throughout their life answer correctly. Earthly life is the ultimate test. Only after that does true life begin in Paradise.

Being kind to others is a cornerstone of Muslim culture. If Muslims follow these pillars in their lifetime and treat others with respect, they can expect entry into Paradise.

The Qur’an is the most important holy text in Islam. Muslims read the Qur’an daily and use it as inspiration in living life. For them, it is the literal translation of God’s word. Adults read the Qur’an to children when they’re born and during Muslim funerals as the deceased enters into the afterlife.

Most Muslims try to memorize as much of the Qur’an as they can. The holy text includes parables, stories, conversations, and rules. It describes Paradise and the rewards that await Muslims who live a moral life. Some Muslims believe entry to Paradise will depend on how many Qur’an passages they know.

The basis of the Islamic afterlife comes from the Qur’an. Now that you’re familiar with its significance, we’ll explore what happens to the deceased’s soul after burial.

Muslim funerals are specific and straightforward. Family members wash and wrap the deceased in a cloth before letting the body rest. It’s what happens in the grave that’s most important. The grave “trial” tests how devout a Muslim was in their lifetime.

Two angels, Munkir and Nakeer, question the deceased about their life and beliefs. They ask: Who is your prophet? What is your religion? How easy or challenging the separation of the soul is depends on the answers. The separation is painless and fluid for devout Muslims, but very painful for non-believers.

The Qur’an mentions: If he is one of the rejecters, the erring ones. He shall have an entertainment of boiling water (56:92–93). It’s said that angels beat the non-believers and punish them with boiling water. After the test, the earth squeezes non-believers to crush their bones while serpents chew their flesh. The torture lasts until Judgement Day when Allah resurrects all beings from the grave.

For those that pass the test, the separation of the soul comes easily. The grave expands to accommodate the soul, and the foods and breeze of Paradise welcome the deceased. But, the soul isn’t in Paradise yet. Life in the grave is a dream state where souls wait in pain or pleasure.

The In-Between or Barzakh 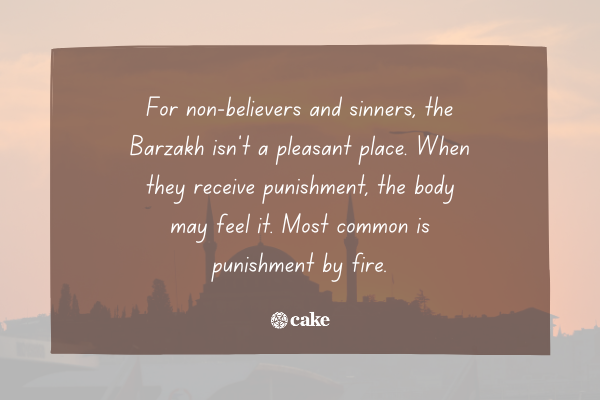 There is a life after death and before Paradise. Muslims describe it as Barzakh. It’s the period between living in the grave and the Day of Judgement when God resurrects all souls. In this life, souls can connect and speak to each other. Believers don’t suffer any physical pain in the realm. They have the pleasures they need.

As mentioned before, the grave expands. The believer’s soul can smell or even hear the Garden of Paradise, but they aren’t there yet. Some describe it as a “dreamless sleep” where the faithful can wait comfortably. The Qur’an writes: and before them is a barrier until the day they are raised (23:100).

For non-believers and sinners, the Barzakh isn’t a pleasant place. When they receive punishment, the body may feel it. Most common is punishment by fire. God sends non-believers to the fire both morning and evening. The squeeze of their grave is so strong that their organs exit from their extremities while animals feast on their flesh.

After they die, Muslims believe that their soul rests until Judgement day. On Judgement day, God holds every person accountable for their actions—good or bad. It’s called the Apocalypse or end of the world in the Christian afterlife.

There’s still hope on Judgement Day for the sinner who believes in one god. But, the ultimate sin—believing in more than one God—is unforgivable, and the price is eternal punishment. The Qur’an says: Your Lord is full of forgiveness for mankind in spite of their wrongdoing (13:6). Some people may spend time in the hellfire, but their souls can still rest in Paradise once they serve their punishment. 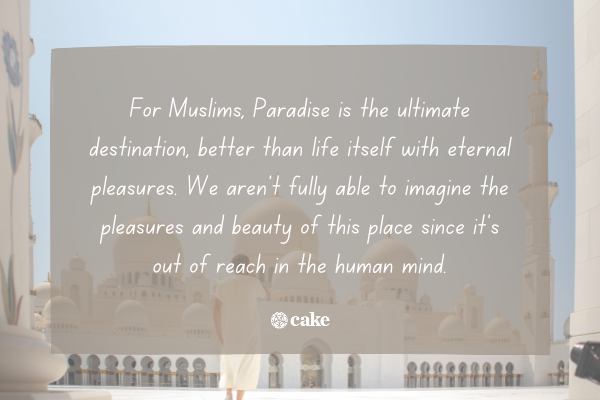 Unlike other religious texts like the Bible or Torah, the Islamic Qur’an vividly describes Paradise. Only in Paradise does real life begin for Muslims with pure souls. Muslims focus on Paradise throughout their life. Instead of passing pleasures like money or objects, it’s fasting, faith, and almsgiving in the physical life that assists souls into Paradise.

The Qur’an writes: There will be two Gardens containing all kinds (of trees and delights); In them (each) will be two Springs flowing; In them will be Fruits of every kind, two and two. The Fruit of the Gardens will be near (55:46-60). For Muslims, Paradise is the ultimate destination, better than life itself with eternal pleasures. We aren’t fully able to imagine the pleasures and beauty of this place since it’s out of reach in the human mind.

For Muslims, life is predestined. God knows our past, present, and future. Muslims must live a faithful and kind life to reap the rewards of Paradise. Islam isn’t the only religion with rewards. In Christianity, the afterlife is in Heaven, and in Judaism, it’s the Garden of Eden. Now that your familiar with the Muslim afterlife, hopefully, you’ll find it easier to give Islamic condolences at a gathering or have a conversation about death with a Muslim friend.

For thousands of years, humans have contemplated the meaning of life and death. No matter your belief or lack of, death is the ultimate equalizer. We all live and die—what happens in the afterlife is up for debate.