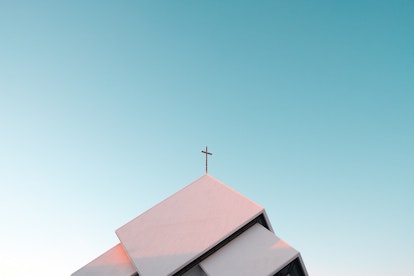 Are you planning to attend a Jehovah’s Witnesses’ funeral? Unsure what to expect? Or, are you curious about their customs? Witnesses’ beliefs surrounding death may be different than yours. But their funeral traditions, proceedings, and etiquette are easy to understand.

One of the first things you’ll notice about a Jehovah’s Witnesses’ funeral is that it will be humble. Not to say that other faiths’ services aren’t humble. But in the Witness religion, it's unacceptable to display signs of wealth or prominence. You won’t see any lavish flower arrangements or gold-adorned caskets. Keep this detail in mind when purchasing a sympathy gift. And when writing sympathy messages.

Showing your support for the bereaved family should be your focus. No matter what belief system you identify, love and respect transcend every one. You may have heard that Jehovah’s Witnesses’ don’t “celebrate” anything. But, that’s not true. They just have a different way of doing things. Learn more about Jehovah’s Witnesses’ beliefs, and their funeral traditions in this article.

COVID-19 tip: If you're planning a virtual Jehovah's Witness funeral using a service like GatheringUs, you can still adapt many of these traditions to include your online guests. Brainstorm with your funeral director or event planner to help you figure out the logistics or any limitations.

Witnesses believe death applies to the physical body and the soul. This belief is different from many other systems. Most religions support the idea that the soul lives on after death. Jehovah’s Witnesses’ believe that you cease to exist when you die. Since your soul does not live on, Witnesses’ are encouraged to cut ties with the dead. This doesn’t mean that Jehovah’s Witnesses forget about decedents. But they don’t place much emphasis on the physical body.

These beliefs come directly from the Bible. There are specific passages in scripture that Witnesses’ draw their beliefs from. Those about resurrection are commonly referenced. John 11:25; Romans 5:12, and Peter 3:13 are three passages that are regularly cited. Jehovah's Witnesses' beliefs come from the Watchtower Bible and Tract Society (The Society). These are the main entities for the Witnesses’ belief structure throughout the world.

Start planning
» MORE: When someone dies, they leave a life behind. This checklist takes you through the next steps.

If you didn't receive an explicit invitation to a Jehovah’s Witnesses’ funeral, don’t worry. All  Witnesses’ ceremonies, including funerals, are open to the public. If you attend a Witness ceremony don’t be surprised if you are referred to as a “Non-Witness.” Those who are not Jehovah’s Witnesses’ are often called that.

Do not mistake Witnesses’ funerals or memorials as wakes or celebrations of life. Witnesses’ funerals are simple, humble affairs. Jehovah’s Witnesses do not believe in the excessive glorification of a person. That is why they do not celebrate major holidays or birthdays.

The service may be an open or closed casket. It will likely take place in a Kingdom Hall, or Witnesses’ place of worship. It may take place in a funeral home. The service is typically led by a male elder. The elder may be a member of the congregation. Or part of the family of the deceased. Close relatives, especially elders, will sit near the front close to the casket. Other attendees will sit behind them.

Order of service or program

The actual funeral service is brief. It doesn’t involve a lot of components. After the service ends you may be invited back to the family’s home for a group meal. This won’t be a large party. And be aware, Witnesses’ don't drink alcohol. If you're invited for a meal, be prepared for a quiet affair.

At other Jehovah’s Witness observations, hymns called Kingdom songs are recited. Today, there are hundreds of original songs and iterations of these songs.

Each prayer at a Jehovah’s Witnesses’ funeral serves a specific purpose. The funeral prayers come from the Bible. They correlate to the thoughts and emotions that funeral-goers are likely experiencing.

Jehovah’s Witnesses may read the following scripture at the ceremony. These passages help to make sense of death. And they can reaffirm that there is hope for resurrection.

Well wishes, prayers, and positive thoughts are all part of the service. But it likely will only last 15 to 30 minutes. This doesn’t mean that this is all the time you should set aside for the bereaved. There may be a burial service.

Or, you may be invited to share a meal with the bereaved. If you have a packed schedule attending only the service is okay. The bereaved will appreciate any time you can give.

Following the service, there may be a graveside service and burial. This depends on the family. Some may take the decedent to a crematorium.

Jehovah’s Witnesses are not against cremation. They believe that God will restore the dead in a manner similar to the restoration of Jesus after his crucifixion. So the state of the person’s physical remains does not matter. This is the main argument for Jehovah’s Witnesses supporting cremation.

The Bible has many different accounts of cremations. Some texts suggest cremation was a punishment for lower-class people or criminals. Others say it was for members of high society who had a good relationship with God.

Typical mourning and remembering the dead

As a Witness, it’s understood that there’s a time to mourn and remember the decedent. The amount of time for mourning varies. There is no set time frame. It will depend on the individual’s family. It is expected they will grieve as anyone else would.

Jehovah’s Witnesses may be more stoic and composed than you’re used to during the service. The emphasis on resurrection means Witnesses’ do not view death as a negative thing. But that doesn’t mean they’re not grieving.

Etiquette at a Jehovah’s Witness Funeral

If you have an idea of how to behave at a funeral, you should feel comfortable attending a Witnesses’ funeral. It’s a reserved, somber event. But it will have a tone of hopefulness and faith.

If you have any doubt regarding attire or appropriate behavior, it’s best to err on the side of conservatism. Unless given specific permission, refrain from using your cell phone. Respect the privacy and feelings of the bereaved. If you wish to take photos, wait until the funeral service ends. Or instead, take photos at the group meal.

Acceptable funeral attire for a Jehovah’s Witnesses’ funeral is similar to other funerals. Clothing should be dark in color. It should also be conservative. Men should wear jackets and ties. Women shouldn’t show too much skin. You should also wear subtle to no jewelry and accessories.

Flowers are allowed at Jehovah’s Witnesses’ funerals.  But opt for a sensible bouquet or small arrangement. You can also bring the bereaved family food.

If the funeral falls around a major holiday, steer clear of festive arrangements. Jehovah’s Witnesses do not observe Christmas, birthdays, or any other “pagan” holidays. Bringing something festive would be in poor taste. This doesn’t mean you can’t choose a predominantly red and green bouquet. That’s fine. However, if the bouquet is red and green and has a plastic Santa Claus, look for something else. If you shop for funeral arrangements, you shouldn’t have any issues.

Remember and Mourn with Respect

Even if you didn’t know the decedent well don’t be nervous about attending a Jehovah’s Witnesses’ funeral. If you observe the ceremony and show your support to the bereaved, you will have no issues. The family will appreciate your well wishes and support. Jehovah’s Witnesses treat funeral proceedings in a certain way.

Their approach may be different from yours. Regardless of your beliefs death always deserves respect and reverence. If you feel compelled, you can join the family in prayer after the service. Whatever you choose, be respectful. Doing so honors the deceased and their beliefs.