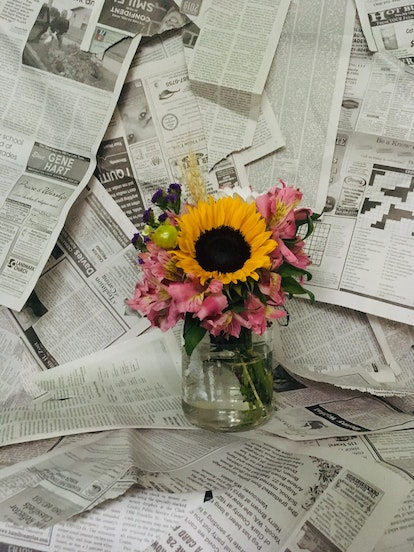 An obituary is a formal death announcement, usually seen in a local newspaper or published online. Writing an obituary for a loved one who died is often challenging. This is especially true if you don’t know how to write an obituary.

This is more than just a goodbye to the deceased. It’s a way to detail the life and legacy of someone you love, creating something memorable for generations to come. For a Jewish loved one, it’s also important to be mindful of Jewish funeral traditions.

Because Jewish funerals typically take place the day following the death, it’s essential to work quickly to publish your loved one’s obituary. Here’s a complete guide to how to write an obituary for a Jewish loved one, as well as key examples to get you started on the right foot.

Steps for Writing an Obituary for a Deceased Jewish Loved One

Writing an obituary requires careful consideration for the deceased, surviving relatives, and the legacy one leaves behind.

This is more than just an announcement of the death. It’s part of someone’s story. Follow these steps to write an effective, compelling obituary for a deceased Jewish loved one.

To begin, you’ll need to collect key information about your loved one. This includes the following:

While you don’t need to include all of the above, it’s not uncommon to do so. The amount of information you include will depend on your budget, the publication’s guidelines, and so on. It’s common to publish obituaries online nowadays, which means you often have more space to work with.

2. Begin by announcing the death

The opening of the obituary is the formal announcement of death. This establishes the basics like the name, age, and place of residence for the deceased person. There are many different ways to formally acknowledge a death, and the one you use comes down to personal preferences. Some ideas are:

This section depends entirely on how much or how little you feel like sharing. You might also wish to include the cause of death, though this is never required.

After announcing the death in the first 1-3 lines, begin sharing the individual’s biography. This isn't their full life story. There simply isn’t enough space for that. It’s a brief highlight reel of someone’s greatest accomplishments and achievements.

Whenever listing a relationship, include the full name of that individual. For example, when listing a marriage, include their spouse’s name and the year of their union. This section is most often in chronological order, but there are no strict rules.

Before sharing the service information, make a point to list any surviving family members. The obituary is for the living, and these family members help tell someone’s story. It’s normal to name closest relatives first, like spouses or children, followed by parents, siblings, grandparents, and so on.

It’s also typical to list any predeceased relatives. These are individuals who passed away prior to this death. It’s usually written as “[Name] is predeceased by his father, [Full name].” Sharing the names of surviving and predeceased family creates a web of ancestry and remembrance.

Last but not least, share the time and date of the service. If it’s not open to the public, write that the family will be having a private memorial. In Jewish tradition, it’s common to include the name of the rabbi who is officiating the service.

Because it is not seen as respectful to send flowers as part of Jewish condolences, the family might choose to list sympathy gift ideas to be sent in lieu of flowers. They might ask for a donation in someone’s honor, food, or other forms of support.

Last but not least, sometimes there is space to include extras with the obituary. These could be photos, quotes, poems, and more. While photos will add to the overall cost, especially if used in a local newspaper, they truly help shape someone’s legacy.

If you do choose to include a photo, many opt for a recent photo. Including both a recent and dated photo helps local community members recognize them, and it’s also something to hold on to for years to come.

An obituary template is often the best way to understand the format and function of this specific type of writing. Because we don’t usually write obituaries often (if at all), having a guide to follow simplifies the process.

Example for a parent or grandparent

Jeff Johnson, 80, of Boston, MA, passed away on August 1 in Amherst, MA, surrounded by his friends and family. He had been fighting cancer for years, and his family was at peace knowing his suffering had come to an end.

Jeff was born in Boston to Jeremey and Gina Johnson on September 30, 1940. He went to high school at Boston Central, and he graduated in 1958. After college, he joined the military, where he served in the Air Force for 20 years. While overseas, he met the love of his life, Diana. They returned to Massachusetts, where they had two children, Ben and Mary.

Jeff enjoyed attending events with his kids and playing golf with his friends on the weekends. He was the first to help a friend in need, and he will be remembered for his acts of community service. Jeff is survived by his wife, Diana, his children, Ben and Mary, and his grandchildren, Mark and Mason. His parents, Jeremy and Gina, died in 1995, and he will be buried in the same family plot.

Example for a child

Mary Smith, age 5, passed away in her mother’s arms on April 1 in Tampa, Florida. Though her life was short, it shined brightly. Born to parents John and Ruby Smith in May of 2000, Mary was diagnosed with a heart condition at birth. She never let that slow her down, and she was a joy to her entire family.

Mary is survived by her parents, John and Rub, her brother, Max, and her grandparents, Martin and Jill Smith. The family is holding a private service in her honor. She will be buried at Springtime Pastures Cemetery in Tampa, FL. The family requests any donations in Mary’s honor to be made to the Tampa Children’s Hospital.

Example for a partner or spouse

Dakota Greer died on January 15 in her hometown of Spring, Iowa, at age 50. She passed with her children by her side, a positive spirit until the very end. Dakota was born in 1960 to parents Isabella and Reid Easton.

After graduating high school in 1978, she attended The University of Iowa, where she studied Engineering. She was one of the first women engineers at Iowa Mechanics Institute and paved the way for women in STEM everywhere. She married her high school sweetheart, Haris Greer, shortly after earning her Master’s Degree.

She quickly returned to work after having her three children, Charles, Linda, and Ana. Though she loved her job, she always had time for family and friends. Dakota is survived by her children and husband, and is predeceased by her parents, Isabella and Reid, and her brother, Pat. Her funeral will be held at Temple Beth Shalom under the care of Rabbi Mark.

Example for someone who died suddenly

The Denton family is sad to announce Bob Weston’s passing, age 25, on September 5. He passed in the hospital, surrounded by his family, after a tragic car accident. Though his time on earth was cut short, his friends and family know he always lived life on his own terms.

Born to Ella and Viktor Denton of Seattle, WA, Bob was always a lively, rambunctious child. He was the first to speak up for what he believed in, and he was a friend to all. After graduating from the University of Seattle in 1999, he took a year off to travel the world and take in all life had to offer.

Though he’s gone too soon, he will be remembered by his parents, Ella and Viktor, and his long-term girlfriend Emily Underwood. A funeral will be held in his honor at Seattle Synagogue by Rabbi Emanuel on September 6. His family asks for the community to respect their privacy at this time.

Writing an obituary for a Jewish loved one doesn’t have to be complicated. As long as you’re able to tell their story in a way that would make them proud, you’re successful.