On the surface, traditional Korean funerals might be vastly different from any funeral you attend in the U.S. Korean funerals are rooted in Confucianism, a set of Chinese teachings that guide how a person should live his or her life.

The Korean government uses these teachings to guide citizens on subjects like education, politics, and love. Korean funeral practices grew from rules for the “right” funeral etiquette and customs.

Are you attending a Korean funeral or want to learn more? It can help to know about traditional customs and modern changes.

Tip: No matter what a family's culture and traditions are, planning or attending a funeral is hard. So, too, are the many other tasks you might face after the death of a loved one. If you'd like some help and guidance through the process, check out our post-loss checklist.

Korean Views on Death, Dying, and End of Life 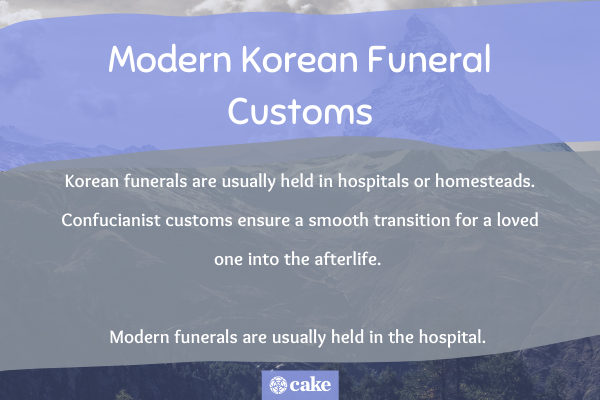 Confucianism principles define a person’s status within the family and community. There's no clear belief about the afterlife in Confucianism. Confucianism revolves around ancestor worship and filial piety — being good to one's parents.

Some Koreans are Buddhist or Protestant (check out our guides on Buddhist and Protestant funerals) and over 50 percent don’t identify with a religion. Many believe that their deceased relatives leave from this world into the afterlife.

Koreans believe it is their duty to help the deceased make a smooth transition into the afterlife in case their loved one becomes a wandering ghost, or kaekkwi,

Customs for a Korean Funeral

Korean customs used to be more elaborate. In the past, Confucian philosopher Chu Shi’s Family Ritual was a standard for Korean society. The writing was a blueprint for how Koreans should approach private and public life. Its funeral traditions began among the wealthy and spread all over Korea.

The rapid growth of Korea changed these customs, though traditional customs are still performed in small villages. Most young people live in city centers, away from traditional ceremonies. The lack of time and space all contribute to shorter ceremonies and the growing rate of cremations.

Tip: If you're planning a virtual Korean funeral using a service like GatheringUs, you can still partake in the rituals below. Talk with your funeral director or event planner to see what they can adapt for a live stream.

Korean funeral traditions begin as soon as a loved one dies. The family wails in a show of emotions called kok to announce the death in the community. The wailing may continue until the burial.

The family may choose to buy burial clothing ahead of time to assure their loved ones of a proper burial. Sangju — the chief mourner — is the first son or grandson of the deceased. He “let” his parents die, so he is believed to be committing crimes against heaven. As an expression of filial piety, he is in charge of the pre-burial, funeral rites, and memorial.

The sangju is in charge of preparing the body. The deceased is covered with a white quilt or burial shroud. The body is washed with incense, nails are cut, and hair is combed. Cotton is put in the mouth and ears, coins on the eyes, and rice in the mouth. The fallen hair and nail clippings are placed in the coffin. This ritual helps the deceased in their journey into the afterlife. In the end, the body is dressed in suui, the traditional hemp funeral garb.

Many of these pre-funeral traditions are done by the funeral service these days, but the sangju is still a central part of the funeral. He is the one that organizes the funeral service. Mourning begins as soon as a family member dies, and it continues for three days. Modern hospital funeral homes have dining rooms and bedrooms for families to stay and mourn.

Funerals used to be held based on social status for three, five, seven, or nine days after death. Today, they are usually held on the third day of death.

Here is an example of a traditional service:

Children of the deceased used to be expected to live at their parents' gravesites for three years. Children abstained from pleasures like meat and wine. It isn’t practical for people to move out of the city any longer, so this practice is almost nonexistent.

Tip: If you'd like to ask for donations to help with funeral costs or to give to charity in memory of your loved one, you can set up a fundraiser online with a website like Everloved.

Flowers are replaced with food offerings in traditional funerals. In modern funerals, offering flowers is more common. Mourners put funeral flowers at the deceased's altar or at the entrance of the funeral room in a hospital or home. 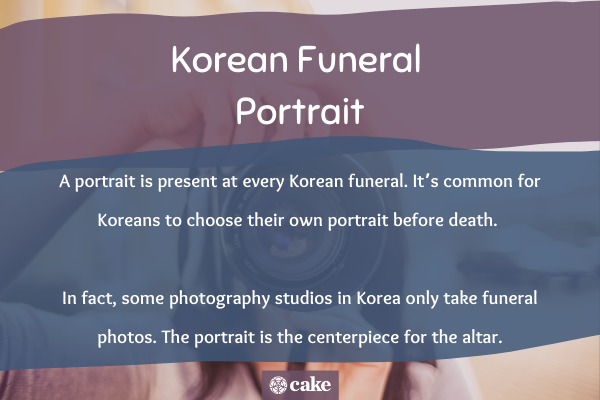 A portrait is present at every Korean funeral. It’s common for Koreans to choose their own portrait before death. In fact, some photography studios in Korea only take funeral photos. The portrait is the centerpiece for the altar.

Food offerings benefit the deceased and their loved ones. The food is a tribute to the deceased’s spirit helping them along in their journey to the afterlife. In some communities, these offerings are eaten for an extended period of time by those who could otherwise not afford the meat.

Today’s funerals still place emphasis on food and drink. Instead of offerings to the deceased, families sit around a large table in the funeral dining hall. Funeral halls make the same food across the entire country: spicy soup, meat, and fish.

Role of wailing and expressing grief

Open grief is a sign of dedication toward the deceased. Wailing doesn’t stop for the entire mourning period in traditional funerals. Family members yell “Aigu, aigu” for a parent or “Oi, oi” for other relations. The chief mourner wails for the longest time. It is an expression of grief or even guilt.

There are three times to wail:

After the first year, the wailing subsides to twice a month. You can expect to find crying family members at a modern funeral. Koreans show as much emotion as possible while they grieve. How hard family members sob is a reflection of their dedication to the deceased in the Confucian tradition.

Traditionally, pallbearers sang a loud and mournful community chant while carrying a large stand for the coffin. Folk songs were practiced three times the night before and four types of songs were sung.

Traditional songs are dying in the modern funeral. Hospitals, where funerals are usually held, have noise restrictions. There is also no room for pallbearers to carry a coffin in the narrow halls.

Pallbearer ceremonies are still performed in villages. But only the older generation knows them. Younger people aren't usually interested to learn these complex songs. Yet, the government is playing a key part in preservation by funding music and performers. Families can request a traditional pallbearer procession from organizations for free. These organizations are desperate to keep the tradition alive. 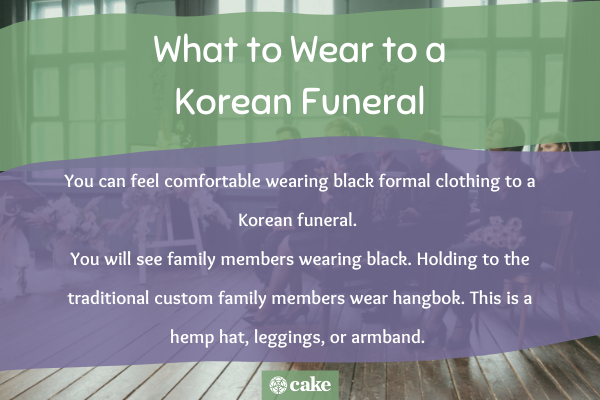 Today, traditional Korean funerals are performed by close-knit rural communities. Still, Confucian customs apply to modern funerals. These traditions may be confusing to outsiders. There are some basic etiquette rules you may want to follow when attending a Korean funeral.

What to wear to the funeral

You can feel comfortable wearing black formal clothing to a Korean funeral. You will see family members wearing black. Holding to the traditional custom family members wear hangbok. This is a hemp hat, leggings, or armband. Usually, the chief mourner wears a black suit with a hemp armband. Hemp clothes continue to be a large business in Korea. Hemp clothes are durable and finer than regular clothing.

In the past, hemp clothes — or sangbok — were worn by the immediate family. Sons and grandson were fully adorned in hemp including a hat and straw shoes. Distant family members wore mixed pieces like only the hemp coat. Parents and husband wore sangbok for three years and distant relations for three months. In modern times, Koreans lean toward a practical approach.

You don’t have to bring flowers to a modern funeral. Only immediate family or large organizations provide flowers, usually large chrysanthemum wreaths. You may want to bring small white or yellow flowers to put at the shrine but it isn’t necessary. In any case, choose more subdued colors like white or even yellow. Bright colors like red or green are reserved for celebrations in the Asian culture.

Instead, you should give a small donation to the family. Instead, donations for funeral expenses are expected. Usually, $50-$100 is sufficient. The rising costs of funerals have made this a necessity.

Korean Burials and Mourning the Dead

Koreans choose natural burials in the countryside. The earth is packed on top of the coffin in layers of odd numbers. The grave isn’t deep, and it remains visible to remind the family of their loss. Coffins are made of natural materials like wood to decompose faster.

The rate of cremation is rising. Korea is a small country running out of both space and time. Family members lack the resources to return to the gravesite as often. According to the Ministry of Korea, the cremation rate was almost 85 percent in 2019. The lack of ground space has contributed to cremation rising. Per Korean law, families that opt for natural burials have to dig up the remains after 60 years to save land space.

Instead, to remember the dead many Koreans keep cremation beads in their home. These are put in special containers in the home and honored by family.

Things to Keep in Mind

Korean funeral culture is embedded in the community, and Confucianist rites survived centuries to still be prominent in funeral services.

There are two types of Korean services you can attend: the traditional and modern funeral. Most funerals have at least some traditional customs. You can show the most respect by familiarizing yourself with traditions. As long as you attend the funeral within three days of the death announcement, you won’t have to worry about breaking etiquette.