Last rites are a way to bring peace to those approaching death. They’re often associated with Catholic funerals, though they actually take place during the dying person’s final days. The formal name form this practice in Catholicism is Viaticum. This is a type of Holy Communion given to someone who is dying. It also includes specific prayers and ceremonies.

The Last Rites are a religious process for cleansing one of his or her sins before they leave this earth. Since Catholics believe in judgment after death, they want to leave this life as clean souls free from sin. The practice and prayers of the Last Rites protect the recipient on their journey to the afterlife.

In this guide, we’ll explain everything you need to know about Last Rights as well as what’s said during these ceremonies and the most popular types of rites.

What Are Last Rites? 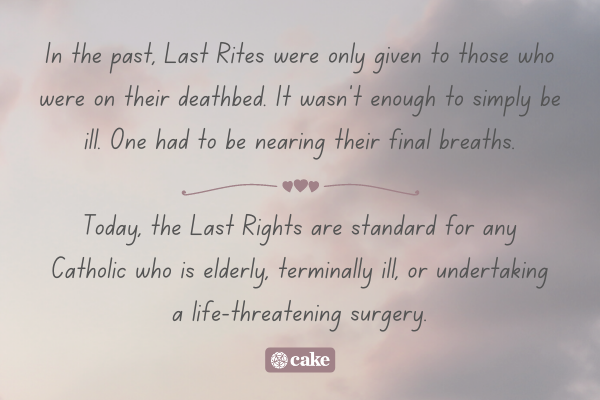 The Last Rights, or Viaticum, specifically refers to 3 sacraments. These are confession, the anointing of the sick, and final Holy Communion. Each of these is a way to cleanse a person’s soul of sins in preparation for the afterlife.

In the past, Last Rites were only given to those who were on their deathbed. It wasn’t enough to simply be ill. One had to be nearing their final breaths. Today, the Last Rights are standard for any Catholic who is elderly, terminally ill, or undertaking a life-threatening surgery. Let’s look closer at the three sacraments:

Finally, if someone is in immediate danger of death, there is also the Apostolic Pardon. This isn’t a sacrament or even a rite. It’s offered by a priest or by the dying person themselves if they reach the requirements for this particular practice. An Apostolic Pardon is an indulgence given immediately before dying to remove any punishments for any sins.

Start planning
» MORE: If you just have a will, they might play Nickelback at your funeral. Make a comprehensive plan today.

When Are Last Rites Performed? 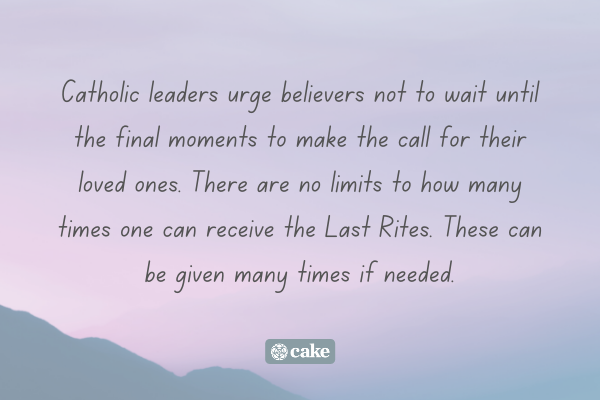 In the past, the Last Rites were commonly performed in extreme circumstances. They were for those who were nearing death. When we think of Last Rites, images of war and famine might spring to mind. During times where death was common, priests would circle the battlefield, hospitals, and even neighborhoods performing Last Rites for those on their deathbeds.

Today, the Catholic belief is a little different. There’s a proper time for every sacrament. For example, confession and Holy Communion are welcome all the time.

However, anointing of the sick has some limitations. Even these aren’t as strict as you might think. This is not a sacrament only for those at the point of death. The anointing of the sick is for anyone who is beginning to be in danger of death. Whether they’re approaching their old age or they’re suffering from a long-term illness, Last Rites are an option.

Catholic leaders urge believers not to wait until the final moments to make the call for their loved ones. There are no limits to how many times one can receive the Last Rites. These can be given many times if needed. Because of this, it’s safer to err on the side of caution when performing Last Rites.

During the Last Rites, there are several prayers given. These are not funeral prayers, though these sometimes overlap. The first prayer is for the anointing of the sick. This prayer is simple. It goes, “Through this holy anointing may the Lord in his love and mercy help you with the grace of the Holy Spirit. May the Lord who frees you from sin save you and raise you up.”

The priest will then say the Lord’s Prayer. The priest will recite a final prayer during the communion— a prayer for protection from the Lord. It goes, “This is the Lamb of God who takes away the sins of the world. Happy are those who are called to his supper.” The recipient will then consume the eucharist, usually wine and a wafer, which concludes the sacraments.

Who Can Perform Last Rites?

Only a bishop or priest gives certain sacraments. Only bishops and priests can be the minister for a confession or the anointing of the sick. However, in dire circumstances, laypeople have actions they can take.

You don’t need to be a priest or a bishop to perform the Holy Communion. There is no scripture restricting who can give a communion. This is something anyone can do if a priest is not reachable in time.

Who Can Receive Last Rites?

If a sick person is not baptized and is approaching death, he or she can not request Last Rites. They will need to request a baptism, which is a gateway to the sacraments. Last Rites are only common in Catholic traditions, not other forms of Christianity.

How to Perform Last Rites 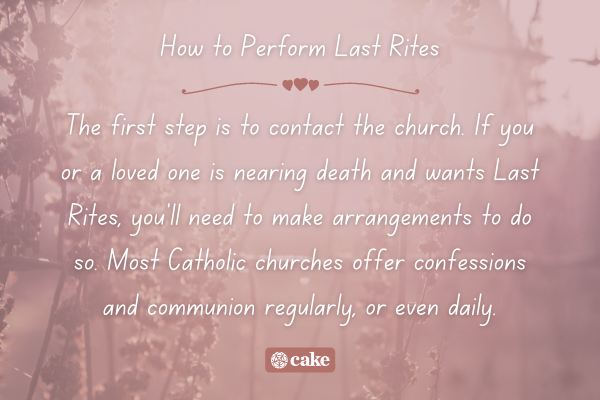 The administration of the Last Rites depends on the specific circumstances. Some dying people are not able to travel or communicate, and they might not be in good standing with the church. All this plays a role in how these Last Rites are performed. However, here is an overview of the process.

The first step is to contact the church. If you or a loved one is nearing death and wants Last Rites, you’ll need to make arrangements to do so. Most Catholic churches offer confessions and communion regularly, or even daily.

However, you’ll need to make arrangements with the church for the anointing of the sick. In some cases, a priest travels to a sick person and performs bedside Last Rites. Again, this will depend on the individual and the situation.

If the person can speak, the priest will start with the sacrament of confession. The priest first makes the Sign of the Cross, and they lead the ill person in what’s known as an Act of Contrition. This is a prayer that expresses sorrow for one’s sins.

Next, the priest recites the Apostles' Creed, which is a renewal of one’s baptismal promises. The recipient does not need to be Catholic to participate in these prayers.

Anointing of the sick

The second sacrament is the anointing of the sick. If the recipient is Catholic, they are anointed with holy oil. For non-Catholics, the priest uses olive or seed oil. Again, the priest leads the recipient in a prayer to heal his or her body.

» MORE: If you just have a will, they might play Nickelback at your funeral. Make a comprehensive plan today.

Finally, the last sacrament is Communion. The priest gives the dying or ill recipient the eucharist, the body and blood of Christ. This symbolizes food for the journey into one’s next life in Heaven.

The last step in this sacrament is the final Communion prayer. If the person is conscious, he or she might request different prayers after the Last Rites.

It is not uncommon to perform several Last Rites for the same person. Because the Catholic church does not recommend waiting until one is on their deathbed to perform the Last Rites, some people will receive this ceremony multiple times during their life.

Last Rites are commonly taken before any extreme medical treatments, like surgery. They’re also common for the elderly who aren’t sure how much time they have left. The Last Rites are a way to free one’s soul from sins so he or she can prepare for the afterlife in peace.

Each culture and religion has a different approach to death. For Catholics, this means holding a Mass of Christian Burial, listening to Catholic funeral songs, and performing Last Rites. In Catholic tradition, the Last Rites are a way to protect those who are in grave danger of dying. This ritual prepares the soul to face its final judgment in the afterlife.

Catholics believe that by confessing one’s sins and receiving Holy Communion, a dying person is free from his or her sins in the face of God. Though these prayers and sacraments were originally called the Last Rites because they were the last thing a person received before dying, this is no longer the case. Today, the Catholic Church recommends these Last Rites to anyone who is facing death in some way, whether that’s by old age or disease.

The Last Rites bring peace to those approaching death as well as their families. In the Catholic faith, this means turning to the church.